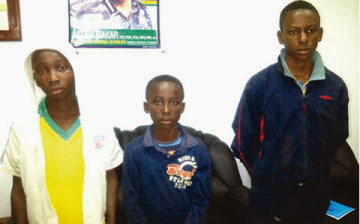 The fame and benefits accorded to Arik teenage stowaway, Daniel Ohikhena, after his escapade might just be the reason why three impressionable young men decided to follow in his footsteps.

Operatives of the Lagos State Airport Command of the Nigerian Police Force yesterday apprehended three teenagers who were allegedly planning to stowaway on international flights.

[READ: Boy, 15, found inside Arik tyre hold thought he was going to the U.S]

The boys identified as Lateef Popoola, 13; Amadi Joshua, 14; and Ukpabio Onyedikachi, 14, were nabbed at different times at the Murtala Mohammed International Airport, Ikeja, the Commissioner of Police said.

Waheed, while handing over the suspects to their mothers, reportedly said there was a need for their respective state governments to rehabilitate them like the Edo State Government did with Ihekina, who was arrested on August 24, 2013 after sneaking into the tyre compartment of a Lagos-bound Arik plane.

He said, “These boys were found at different times at Murtala Muhammed International Airport, Lagos. Their aim was to get into any plane and travel out of Nigeria.

“I decided to hand them over to their parents so they will be well taken care of and stop dwelling on the fantasy that you can just come into the airport, enter a plane and travel.

“Their state governments should try to rehabilitate them just like Edo State did for the stowaway in Benin.

“Lateef Popoola is from Ogun State; Amadi Joshua is from Ebonyi while Ukpabio Onyedikachi is from Abia State.

“The airport is not a place that you can just come into and travel. There are formalities. We don’t want to see these children here again.”

The teenagers, who spoke to newsmen, said they had been nursing the idea of travelling abroad, adding that they were not ready to execute their plans yet.

Lateef said he went to the tarmac to observe how aeroplanes take off and land.

He said he was able to gain access to the runway by sneaking into an airport apron bus, but was arrested shortly after alighting.

He said, “I am not in school, I dropped out in Primary three. I was arrested last week Wednesday. I actually wanted to travel but I have yet to decided where I will go. So, I just went to the tarmac to see the aeroplanes.”

Lateef’s grandmother, Adunni, said she had no idea that her grandson was nursing the idea of travelling out of the country. She said she had been responsible for his upkeep since his mother abandoned him at infancy.

“I did not know that he wanted to travel. I just did not see him last week and I started looking for him all over the place. It was on Saturday that I finally found out that he had been arrested,” she said.

Onyedikachi and Joshua were said to have been arrested after asking some security agents where Malaysia flights were boarding.

After being questioned, the boys, who were both in SS1, said they had no travel documents and were immediately arrested.

Police said Onyedikachi’s brother was in Malaysia and it was possible that the teenager wanted to travel out to see his brother.

Onyedikachi’s mother berated her son for his escapade. She said she had warned him and Joshua to be well behaved at all times.

She said, “I had no knowledge of what they did. Onyedikachi is well taken care of and is not suffering. I don’t know what pushed him to do this.