Did Alicia Keys show a bit too much cleavage here? Judge for yourself (PHOTOS)

She’s been in showbusiness for years and is usually clued up on what to wear on television.

But Alicia Keys, 31, almost suffered a mammoth wardrobe malfunction during an appearance on U.S. show Late Night With Jimmy Fallon on Wednesday.

The singer’s incredibly low neckline left very little to the imagination as it slipped down to reveal a bit too much cleavage. 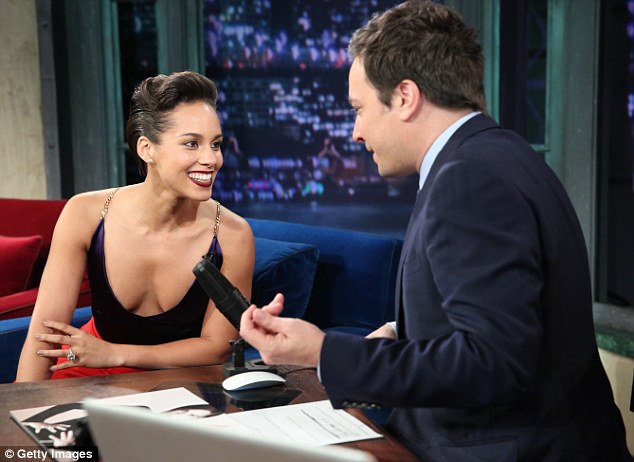 Here come the girls: Alicia Keys almost suffered an embarrassing wardrobe malfunction during an appearance on Late Night With Jimmy Fallon on Wednesday after her top slipped down to expose a bit too much cleavage

The star, who is currently promoting her fifth studio album Girl on Fire, wore a skimpy purple cropped top and revealed her chest as she leaned over to chat to the host.

She teamed the top with a bright red pencil skirt and wore a pair of high-heeled shoes.

And the Empire State of Mind completed her look by wearing her hair up on her hair and she painted her lips a dark red while wearing a silver ring on her finger. 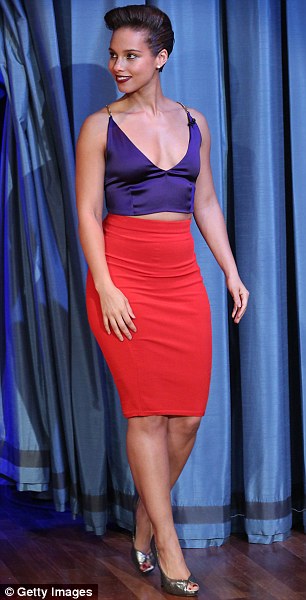 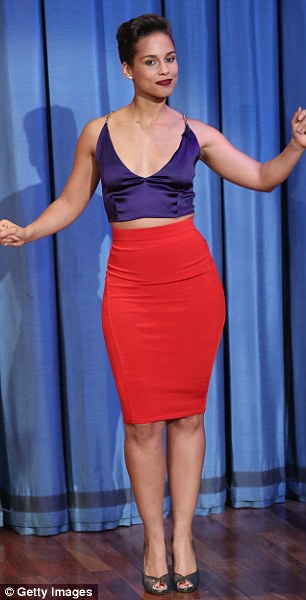 Making the most of her assets: Alicia Keys showed off her figure by wearing a low slung top and a tight-fitting pencil skirt which perfectly accentuated her curves 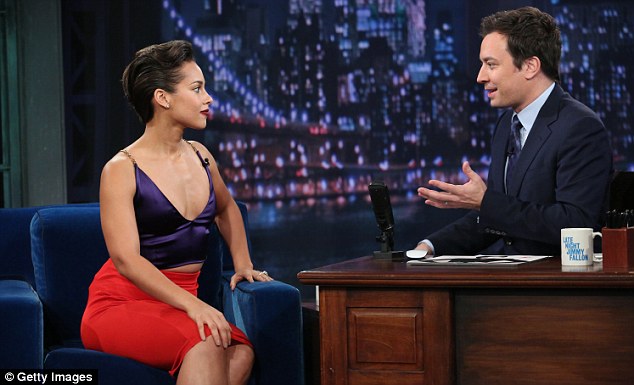 Girls on tour: Alicia is currently making appearances on a number of television shows in a bid to promote her fifth studio album

Alicia avoided embarrassment as her top did not slip all the way down to unveil her breasts before she headed over to the stage to sing with her band.

The musician is currently working hard at promoting her new album and has being doing the rounds on various TV and radio shows.

And the singer has credited her son Egypt with making her a better songwriter after giving birth in 2010. 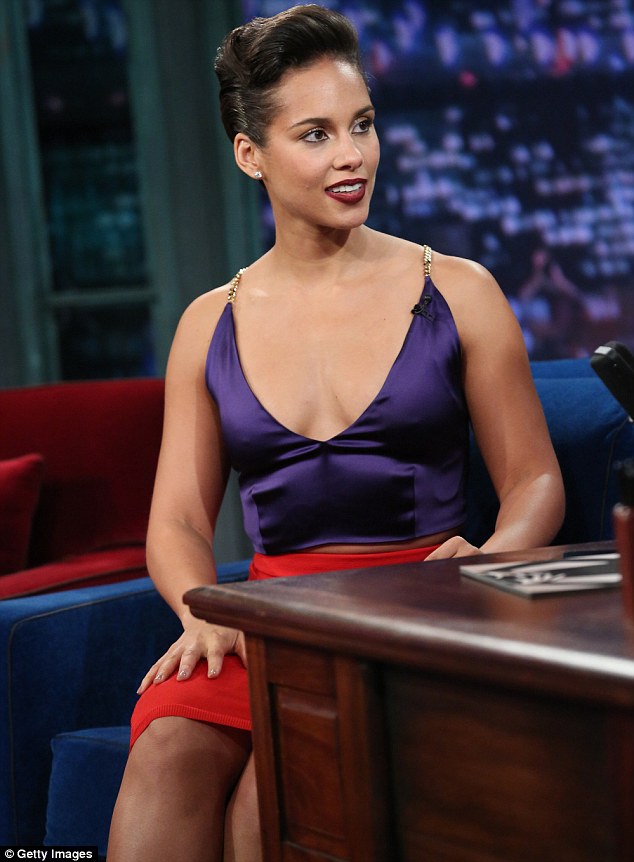 Making a show of herself: Alicia wore a revealing outfit on the show before taking her place on the stage to perform 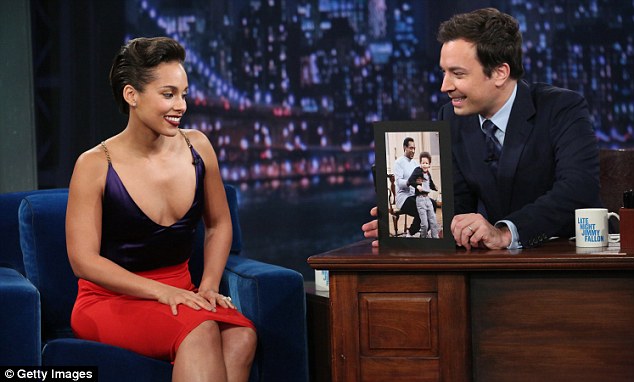 Enjoying family life: Alicia has has said she feels content since marrying husband Swizz Beatz and giving birth to son Egypt in 2010

She told Google+ Hangout: ‘I think having a son now, I found a place I never knew before.

And the star, who married husband Swizz Beatz the same year she gave birth, has happily settled into family life. 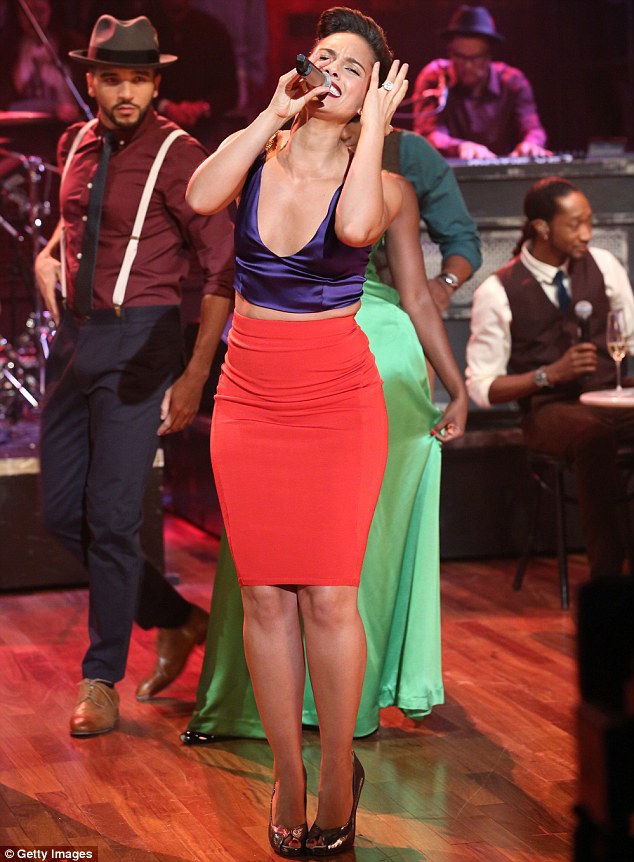 Music maestro: Alicia performed on the show and she was backed by her band and dancers

She told Stylist magazine: ‘My husband was the first person who really said to me: “You’re not going to dinner after that big awards show? Why?” It wasn’t even part of my thinking to be like: “Wow, this is awesome. Look what we did.”

‘That wasn’t the culture I was brought up in. I was working really hard and I don’t know if I expected anything.

‘When I began to know my husband, it would be little fun things he would do for me, or his friends. I never knew how he could know so many people.’

And while the singer is enjoying life at home, she will soon embark on a tour of the U.K. and will visit cities including Liverpool, Newcastle, Manchester, Birmingham, Nottingham and London between 18 and 30 May 2013.

She said: ‘I’m so excited to be touring again and it’s great to be back in the UK! I Love it here and I’m looking forward to performing and feeling the energy of the crowd – there’s nothing like it. I plan to bring you something Emotional and exciting! I’m a brand new me!’ 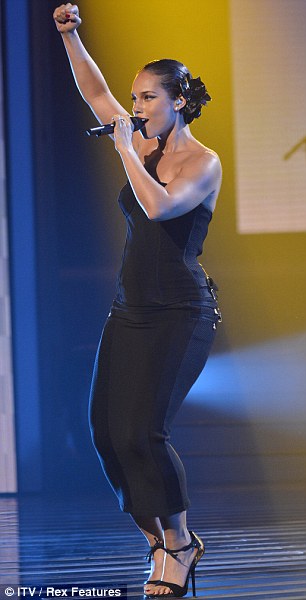 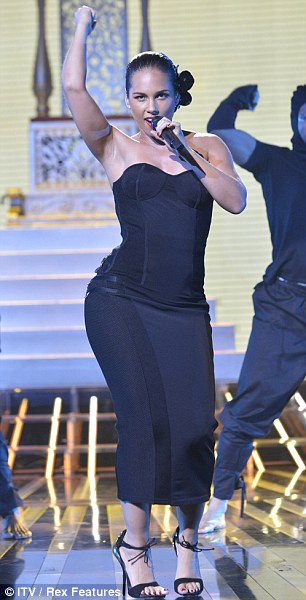 And she’s live: Alicia performed on The X Factor during the Sunday night results show earlier this month

It’s no longer news that Nigeria has confirmed its first case of the Coronavirus, according to the Minister of Health. ...