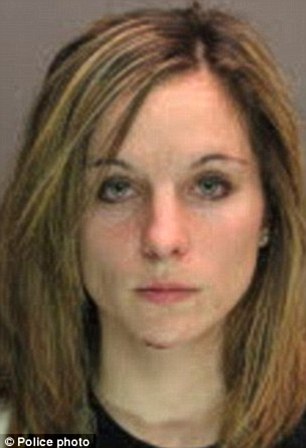 Nicole Jacques, 27, will start her jail time for corrupting a minor on August 26th

A Pennsylvania teacher has been sentenced to 11.5 to 23 months in jail for having a sexual relationship with a 15-year-old boy she met at her devoutly religious school.

Nicole Jacques, 27, was 25 years old when she faced charges of 20 counts of statutory rape, 20 of involuntary deviate sexual intercourse, ten counts of unlawful contact with a minor and 20 counts of a corruption of minors.

Ms Jacques, from Hatfield, Pennsylvania, was finally charged with corruption of minors by Montgomery County Judge Wendy Demchick-Alloy on Friday and will start her sentence on August 26th.

The former Calvary Baptist School teacher will also serve a three-year probation sentence after her parole time and pay a $500 fine, phillyBurbs.com reported.

Ms Jacques is to have no further contact with her young male victim and will have to report her employment, address and vehicle she drives for the next 15 years.

She had been reported to police in February 2012 for ‘excessive and inappropriate communication’ by the teenager’s father.

She reportedly met the boy while working as a teacher at Calvary Baptist School in Towamencin.

She quit her job in 2011 and began a year long relationship with the 15-year-old, according to Hatfield Township Police.

A police investigation showed there were 37 calls between Jacques’ landline phone and the teens cellphone between January 23 2012 and February 9 2012 and 1,168 text messages between the pair.

The boy admitted to having sex on many occasions with his former teacher at her apartment but authorities did not believe the relationship started until after Jacques had left the school.

It is not believed that any sexual relationship between the teacher and student occurred on school property. Authorities would not say how long Jacques taught at the school.

The school, which teaches from pre-school to senior high and has a strong focus on religious education, cooperated in the investigation into their former employee.

Prosecutor for the case, County Assistant District Attorney Matthew Quigg said: ‘I wanted to see her punished appropriately for what she did, as well as send a message to the community in general that you can’t engage in sexual relationships with minors.

‘Specifically, she engaged in sexual relations with someone who was a former student of hers.’

Randy Thaxton, chief administrator, told philly.com that he was ‘deeply saddened’ by the arrest but the school had no further comment.

Ms Jacques will never be allowed to teach again.