Meet the woman with the biggest HANDS in the world (PHOTOS)

No, the pictures are not photoshopped.

This 59-year-old woman, Duangjay Samaksamam has suffered from a rare condition which leaves her limbs unusually swollen.

The shop owner now has the unenviable distinction of having the biggest hands in the world owing to her medical condition.

Experts believe Samaksamam is the only person to suffer from the condition known as macrodystrphia lipomastosa –  extending from her shoulders straight down to fingers on both arms. 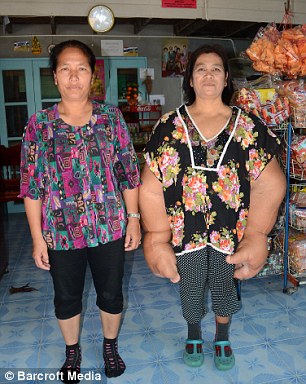 Embarrassed by her condition, she chose to live as a recluse for many years refusing to go to school because of that.

Doing simple home chores are extremely difficult tasks for the Thai woman who was forced to relinquish her reclusive lifestyle so as to run her family business.

As news spread of her condition, at age 25 she started undergoing a series of operations to try and solve her problem. 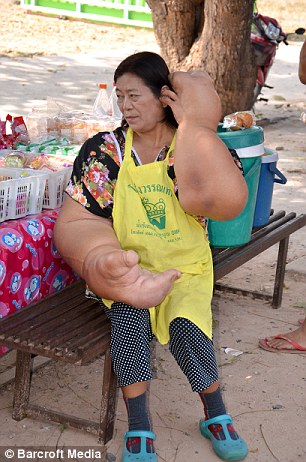 But rather than improving the situation, the surgery made the condition worse.

Read the Daily Mail report below:

Duangjay who now lives with her sister and her niece, said: ‘During the surgery they didn’t remove any tissue, just opened it up, opened up my arm to check it.

‘They said it wasn’t bad tissue just really thick fat in there, but they didn’t remove anything for fear of damaging the nerves.

‘After five months my wrists began to hurt. I felt so much pain. I couldn’t sleep.

‘If I held something it would fall out of my hands because I couldn’t feel them.’

Having undergone two further operations, Duangjay was left in a crippling condition.

She added: ‘They removed about 700 grams of fat and blood out of my hands but after a month it just grew back.’

Months later she was contacted by a doctor, from Kitasato University in Japan, who flew her to the country for MRI scans and discovered she was suffering from Macrodystrophia Lipomatosa.

Plastic surgeon Dr Eiju Uchinuma said: ‘This case is very rare. Both her arms are enlarged. Her arms and hands are enormous so they swell badly but it could be worse.

‘My diagnosis is that she is the first and only person in the world who has Macrodystrophia Lipomatosa from shoulders to her fingers on both arms.

‘The cause of the disease is unknown and is therefore incurable.’