‘She deserves to be executed,’ says brother of woman facing death penalty for marrying a Christian

Brother of the Sudanese woman facing the death penalty for ‘abandoning her Islamic faith’ has said she ‘should be executed’ if she continues to be a Christian.

27-year-old Meriam Ibrahim, who gave birth to a daughter in her prison cell last week, has been sentenced to  100 lashes and death by hanging after a Sharia court convicted her for converting to Christianity, and ‘adultery’ because she had wed a non-Muslim.

Her brother Al Samani Al Hadi, told CNN that he had denounced his sister to the authorities because his family are ‘Muslim people.’

But Ibrahim maintains that her Muslim father left when she was young and that she was raised a Christian by her Ethiopian mother, who is an Orthodox Christian.

‘It’s one of two; if she repents and returns to our Islamic faith and to the embrace of our family, then we are her family and she is ours,’ he said.

‘But if she refuses she should be executed,’ he told CNN.

Today Ms Ibrahim’s lawyer said she has appealed the sentence.


The appeal demands the release of Ms Ibrahim, saying the court that tried her committed ‘procedural errors,’  said her lawyer, Eman Abdul-Rahim.


Ms Ibrahim ,a qualified doctor, was thrown in jail in September and earlier this month was sentenced to death for apostasy and adultery for marrying Daniel Wani in 2011, a Christian Sudanese man with U.S. citizenship who lives in Manchester, New Hampshire.

As in many Muslim nations, Muslim women in Sudan are prohibited from marrying non-Muslims, though Muslim men can marry outside their faith.

Ibrahim has a son, 18-month-old Martin, who is living with her in jail, where she gave birth to a second child last week. By law, children must follow their father’s religion.


A video shows Ibrahim with her newborn and her son Martin at the prison’s hospital where she gave birth.


Looking happy and relaxed, the video shows Ibrahim breastfeeding the baby while seated on a bed with Martin sitting close by.


Amnesty International condemned the sentence against Ibrahim, calling it ‘abhorrent,’ and the U.S. State Department said it was ‘deeply disturbed’ by the sentence.


Sudan introduced Islamic Shariah law in the early 1980s under the rule of autocrat Jaafar Nimeiri, a move that contributed to the resumption of an insurgency in the mostly animist and Christian south of Sudan. 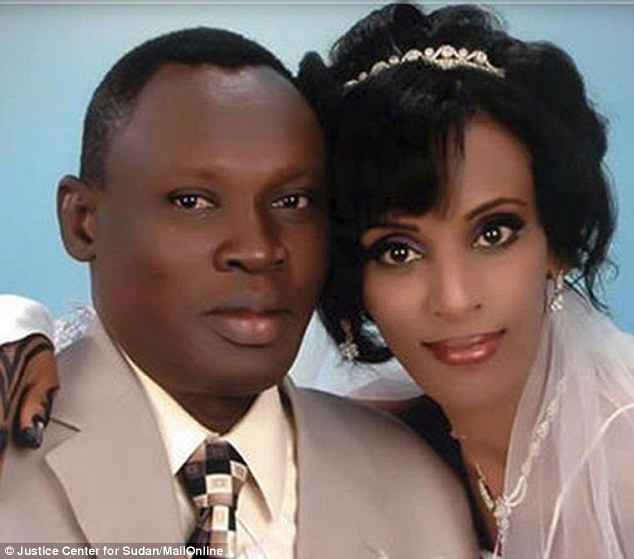 The south seceded in 2011 to become the world’s newest nation, South Sudan.


Sudanese President Omar Bashir, an Islamist who seized power in a 1989 military coup, has said his country will implement Islam more strictly now that the non-Muslim south is gone.


A number of Sudanese have been convicted of apostasy in recent years, but they all escaped execution by recanting their new faith.


Religious thinker and politician Mahmoud Mohammed Taha, a critic of Nimeiri and his interpretation of Shariah, was sentenced to death for apostasy.

Campaigners had said that they feared the Sudanese government was just ‘playing games’ to try and get the international community off its back.