These pictures show the chilling moment a sexual predator posed as a ‘Good Samaritan’ to help a drunken woman before taking her home and raping her.

Ebrima Dampha, 33, was caught on CCTV as he pounced on his vulnerable victim when she passed out in a bar at four times the drink drive limit.

The woman, who is in her thirties, was barely able to walk or talk as Dampha, a chef from Havant in Hampshire, dragged her outside to a taxi, intent on raping her.

Vulnerable: The victim is led to a taxi by Dampha, who pretended to help the woman but took her back to her home and raped her

He rifled through her handbag to find her address in the car and even acted as her saviour on their journey back to her house, a court heard.

But when they arrived he took money from her purse to pay the fare, waved the cab away and led her upstairs to attack her in her own house.

There, he raped her as she lay unconscious and ‘completely helpless’.

The victim – who cannot be named for legal reasons – had gone out for a meal with a friend ‘for a good old catch up.’

They went on to the Roast Bar in Portsmouth, Hampshire, where she was targeted by Dampha, a father-of-three with a history of domestic violence.

When she woke up the morning after the assault, Dampha had gone and she realised she had been raped. 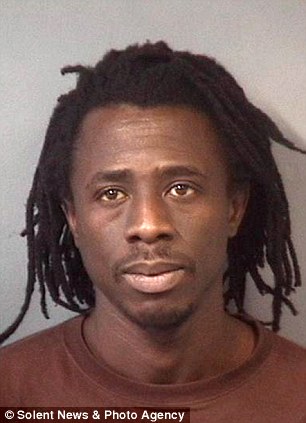 However, she had no recollection of where she had been.

A small red ‘R’ stamped on her hand told police she had visited the Roast Bar and they were able to retrieve CCTV recordings from the venue.

It showed Dampha leading his victim outside and into a taxi at 2.45am.

He was arrested and admitted having sex with the woman but insisted it was consensual.

However, a jury at Portsmouth Crown Court rejected his version of events and convicted him of rape.

His victim today spoke of her ordeal after Dampha was jailed for eight years.

The woman, from Portsmouth, said: ‘I have been through hell because I still don’t exactly know what happened. I’ve got no recollection.

‘My friend and I hadn’t planned to stay out that late and were having a good old catch up.

‘What happened that night is always going to be with me and I don’t know how to move on.

‘But I do have an overwhelming sense of relief that people did believe what had happened.

‘If you go out and you’re a bit drunk it doesn’t give someone the right to take advantage of you.

‘Some people say if you’re drunk you’re asking for it but you’re not.’

Before the trial, the victim would wake up every night – at the same time she was attacked.

She gave her evidence from behind a screen, at times breaking down in tears. To this day, she has not come face-to-face with her attacker again.

She said: ‘Seeing him again would be too traumatic. I went to court just to stop this from happening to someone else.

‘If I hadn’t reported it and later found out he had done it to someone else I don’t know how I would have felt.’

She added: ‘I don’t go out like I used to. I just go to friends’ houses now.

‘I don’t think I will ever go to that area of town again because seeing the Roast Bar would freak me out.

‘It comes down to being sensible about what you’re drinking, although sometimes you don’t feel it and it hits you at once.

‘If you’re out with friends and one suddenly appears quite drunk, look after them and make sure they get home safely. Look after each other.’

Judge Roger Hetherington told Dampha as he jailed him for eight years: ‘You would have realised, I have no doubt, that she was very drunk.

‘That would have been confirmed when you came across her passed out on the floor.

‘From that moment onwards you saw the possibility of an opportunity for some sexual gratification.

‘She was incoherent, barely able to stand up and in no position to look after herself.

‘The aggravating features of this rape are the breach of trust – because you were acting in a role of someone looking after her – that she was assaulted in her own home, and the element of targeting of a hopelessly drunk woman.

‘You went into her house on the pretext of looking after her.

‘Instead you took her upstairs and raped her in circumstances where she was completely helpless.’

‘He carried out a premeditated attack on a helpless female victim in her own home.

‘This case highlights the dangers of drinking alcohol to excess and his sentence sends a clear message to anyone who preys upon vulnerable and defenceless victims.’