The governor of Ekiti, Ayo Fayose, in something that looks like an official start of his 2019 presidential campaign, took to Twitter to post a poster, with the words, “Solution 2019”

Today, the former Minister of Education, in reaction to the military operation in the Southeast, “explained” to President Muhammadu Buhari that as a leader he is supposed to be bonding with the good, bad and the ugly, not only those who worship him. The regular commentator, has, as usual, attacked President Buhari for attending the “commissioning of a poultry but not strong enough to visit Benue”. He added that the President values animals better than humans. 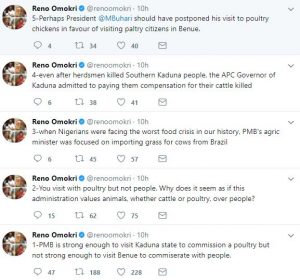 Considering he was a vice president, Nigerians on Twitter have given Atiku no breathing space since when it was known that he intends to contest in 2019. Today, again, he asks a user to give evidence of corruption allegations against him.

Nigerian singer, Mr Eazi, shunning recent social media attacks, thanks his fans from outside Nigeria for streaming his songs.