It was anticipated to be one of the most controversial Saturday Night Live hostings of the past few years.

But Miley Cyrus mostly played it safe as she helmed the comedic show on Saturday.

However, when it came to marking the event at an afterparty following the programme, Miley was back to her best – wearing an entirely see-through dress. 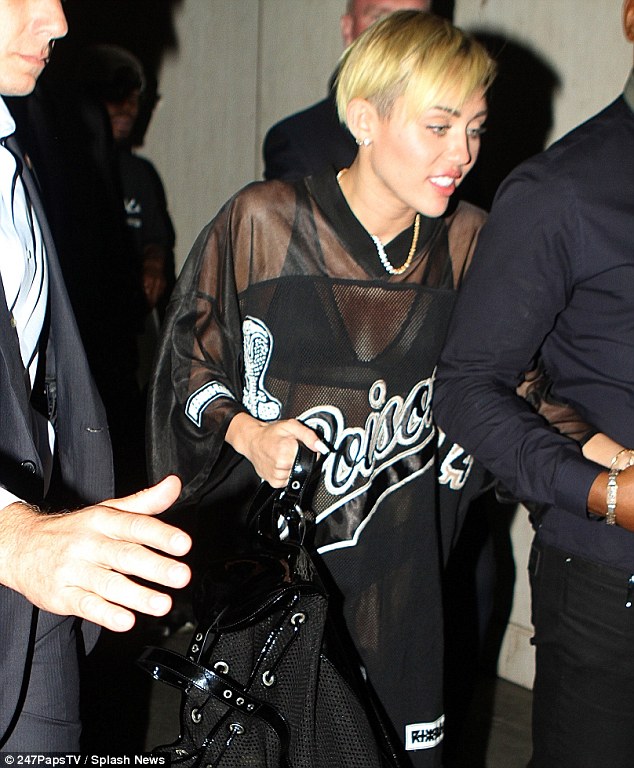 Sheer madness: Miley Cyrus wore a see-through dress as she celebrated her SNL hosting at STK Steakhouse in New York on Saturday night

Standing out: Miley looked unconcerned about the amount of flesh that was on show as she headed inside

The 20-year-old singer left nothing to the imagination in the jersey style dress, which featured the word ‘Poison’ emblazoned across the front.

Wearing just skimpy black underwear beneath, Miley looked as unconcerned as ever about just how much skin was on show as she headed in to STK Steakhouse in New York for the celebrations.

In fact, Miley had worn the outfit to perform Wrecking Ball on the show – but the ensemble didn’t look quite so revealing beneath the studio lights. 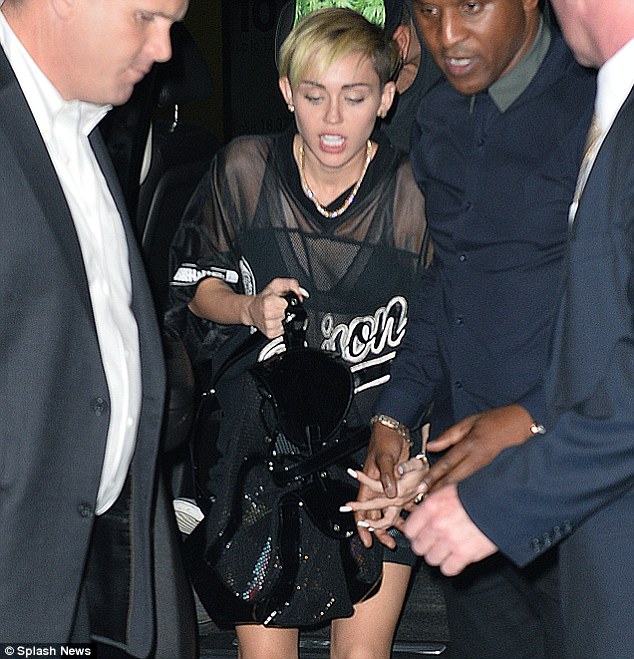 Keeping him close: Miley kept a tight grip of one of her bodyguards as she headed inside to the afterparty 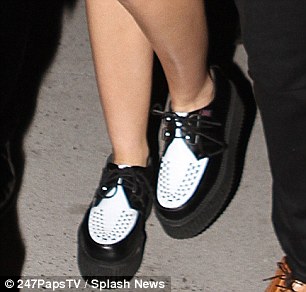 Creeping: Miley wore a pair of black and white creepers to complete her look

For the afterparty, the twerking princess finished off her look with black and white studded creepers, and carried a large black tote bag.

Clearly thrilled with how the show went, Miley shared a picture of herself with her arms up and tongue out at the afterparty on her Twitter page.

However, while Miley might have been pleased with the show, the critical reaction to her episode was vastly contradictory.

One newspaper even went as far as to call Miley’s programme ‘the worst episode in recent history’.

The Las Vegas Guardian Express wrote: ‘A well-placed source had reported that Miley would twerk, rip into Sinead O’Conner and possibly even ‘cross boundaries’ because of the late hour of the show.

‘Some fans said she may end up costing the network money because she could perhaps treat the viewing audience to more nudity than we’ve seen already. Instead of pushing limits or crossing boundaries, she hosted the worst episode in recent SNL history.’ 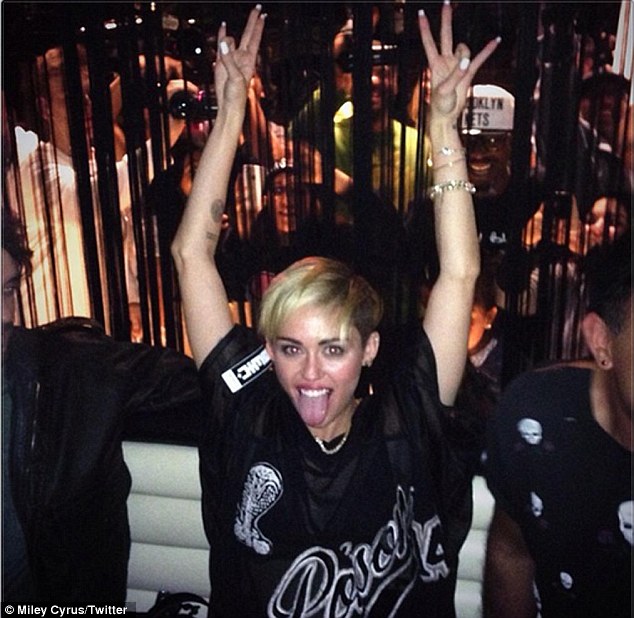 Party time! Miley posted a picture of herself at the afterparty on her Twitter page 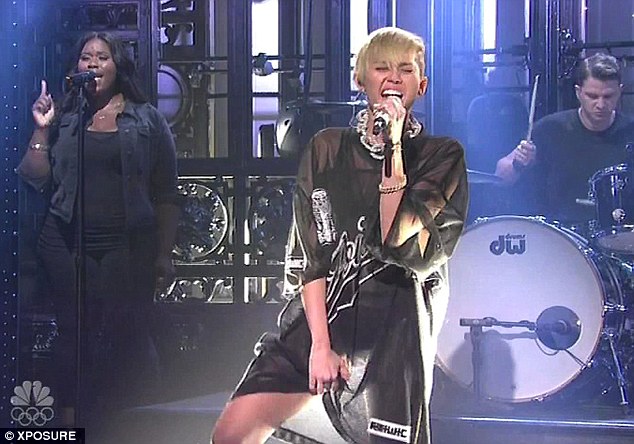 Playing it safe: Miely’s outfit didn’t look quite as see-through as she hosted SNL – in an episode which was labelled he ‘worst in recent history’ in one review

And Twitter reactions to the show were also less than positive.

@DarlaJOchoa was not impressed and wrote: ‘@MileyCyrus So Gross ! Hope SNL ratings dropped because of you. ! You disgusting person,’ and @sketchman9 [email protected] ‘Was looking forward to another new SNL then I remembered Miley Cyrus is hosting. Nevermind.

However, some people liked the episode with @LiLi_0201 writing: ‘@MileyCyrus killed it on #SNL tonight. Loved ur skits, but u rocked performances! I see why @CheyneThomas is so proud of you. Keep it up,’ while @madiwalser added ‘You can say whatever the hell you want about Miley Cyrus but you can’t deny she smashed her performances tonight.’