A woman is currently in custody for allegedly stabbing her lover to death after he tore a photo of her son’s late father. 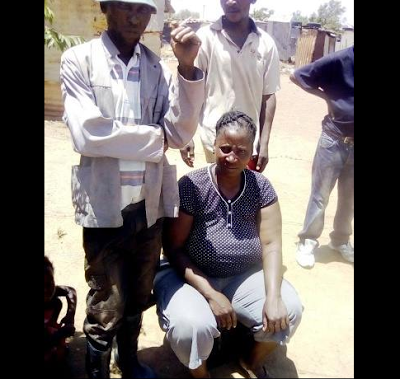 Trouble started while Tumelo Diphoko (42) and his 26-year-old girlfriend were relaxing together at his home at Chris Hani Square in Mangaung, South Africa, on Tuesday afternoon.

According to a 38-year-old witness, the mum apparently found a torn ID photo of her son’s  father, who died in 2014. The woman apparently became furious.

“When the mum saw the photo was torn, she asked her boyfriend if he was responsible. “He said yes, he did it because he could see she still loved him.
“The photo was the only thing the little boy had left of his father, who died shortly after he was born in 2014. “The couple had lived together for a year.
“The woman took out a knife from a drawer and stabbed him. “I never thought she would do something like this.”

Tumelo’s brother, Galeboe (41), said by the time he arrived on the scene after receiving a phone call about what had happened, his brother was already dead.

“We will bury him soon. “There’s not much else I can say. “I hope his spirit rests in peace and justice takes its course,” said Galeboe.

She is in custody and will appear in court soon,” said Ntsika.