Worse than we thought: Smoking harms your brain too, leading to sharp mental decline – Study

Smoking is known to be highly damaging to physical health, being a major factor in cancer and heart disease.

Now, however, its alarming effects on the mental well-being of millions of smokers have been outlined by British scientists.

Lighting up regularly has been associated with a sharp decline in the performance of the brain, according to their study.

They found that middle-aged smokers performed less well on tests compared with those without the tobacco habit.

The project examined memory, planning and overall mental ability after four and eight years. The tests included asking people to learn new words or name as many  animals as they could in a minute.

They also found that high blood pressure and being overweight took their toll of brainpower – but not as much as smoking.

The team warned that people need to be aware of the impact on their health of lifestyle choices, like smoking.

Risk factor data was examined for more than 8,800 people aged 50 and over taking part in the English  Longitudinal Study of Ageing.

The researchers at King’s College London were investigating links between the likelihood of a heart attack or stroke and the state of the brain. 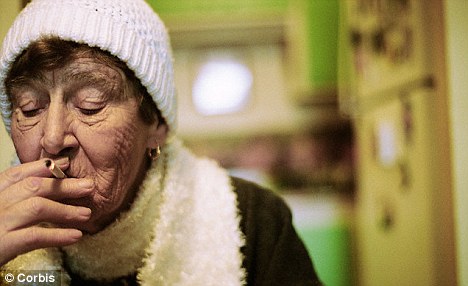 High blood pressure and high risk of stroke were also associated with lower scores for memory and overall mental ability after eight years.

Being overweight was linked to poor memory, according to the findings published in the journal Age and Ageing. Lead scientist Dr Alex Dregan said ‘Cognitive decline becomes more common with ageing and, for an increasing number of people, interferes with daily  functioning and well-being.

‘We have identified a number of risk factors which could be associated with accelerated cognitive decline, all of which could be modifiable. This offers valuable  knowledge for prevention and treatment interventions.’

The researchers said their results indicate that high blood pressure has a gradual effect on the brain over a long period.

This could explain why short-term trials of blood pressure drugs being used to treat mental decline failed to show a clear benefit.

Recent laboratory research suggested a compound in tobacco called NNK provokes white blood cells in the central nervous system to attack healthy cells, leading to severe neurological damage. There are almost 10 million  smokers in the UK. The habit is still by far the biggest single cause of preventable illness and  premature death.

It is a major contributory factor in causing heart disease and 39,000 lung cancer cases each year.

Dr Simon Ridley, of Alzheimer’s Research UK, said: ‘Research has repeatedly linked smoking and high blood pressure to a greater risk of cognitive decline and dementia. This study adds weight to that.

‘Cognitive decline as we age can develop into dementia, and unravelling the factors linked to this decline could be crucial for finding ways to prevent the condition.’

Jessica Smith, of the Alzheimer’s Society, said: ‘We all know smoking, a high blood pressure, high cholesterol and a high Body Mass Index is bad for our heart.

‘This adds to the huge amount of evidence that also suggests they can be bad for our head too.’

One in three of the over-65s will develop dementia, she added.