Another Liberian passenger ‘shows symptoms of Ebola’ in the US

Officials of the of the American Centre for Disease Control (CDC) have isolated a Liberian man reportedly showing symptoms of the Ebola Virus Disease.

The unnamed man was said to have flown into Newark Liberty International Airport from Brussels, Belgium.

The man who was travelling with his daughter was said to have been vomiting as they landed in New Jersey.

They were both removed from the plane by a CDC crew in full Hazmat attire.

It comes as the Ebola patient in Texas is said to have deteriorated to a ‘critical’ condition.

See a photo released by a passenger on the plane below: 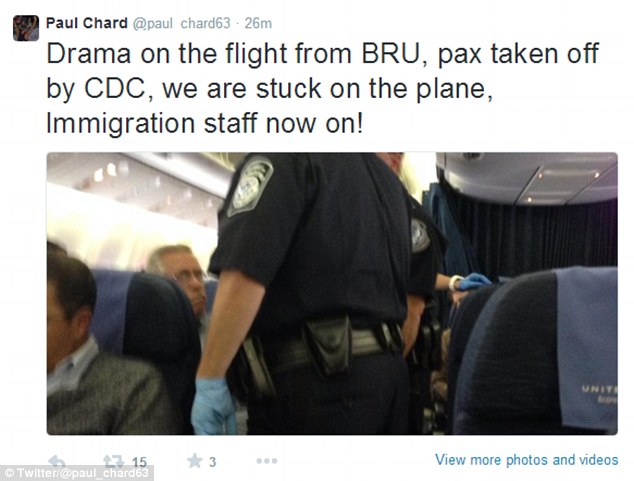 Read the Daily Mail report below:

The remaining passengers have been allowed to leave after being quarantined on the Boeing 777 at Gate B54 for nearly two hours after landing at about noon, according to FlightAware’s activity log.

Reports claim the passenger was found to be noncontagious after initial examinations.

The man is believed to have flown from Liberia via Brussels, Belgium – the same route taken by Thomas Eric Duncan, the first person to be diagnosed with Ebola in the United States.

‘Upon arrival at Newark Airport from Brussels, medical professionals instructed that customers and crew of United flight 988 remain on board until they could assist an ill customer,’ the statement said.

‘We are working with authorities and will accommodate our customers as quickly as we can.’

Welsh passenger Paul Chard tweeted a picture of immigration officials on board the plane, adding: ‘Drama on the flight from BRU, pax taken off by CDC, we are stuck on the plane, Immigration staff now on!’

The incident comes just a day after the government conceded that its handling of the crisis has so far been ‘rocky’ as Thomas Duncan is treated for the disease in Texas and 10 people are now classed as ‘high risk’.