Bribery, extortion and smuggling at the Nigeria-Benin Republic border (Part 2) 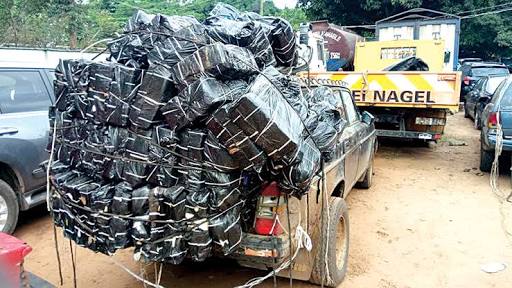 Smuggling – a flourishing business at the border

The border is particularly notorious for rice smuggling as there are several smuggling rings operating in the area. I disguise as a trader from Nigeria looking to buy rice, which would be smuggled to Nigeria via Seme border.

I arrive at the popular Krake market, a market that services the needs of the residents of the border community as well as traders from Nigeria. I tell the rice seller, a dark, middle-aged man, of my intention to purchase bags of rice and explain that I have no means to legally transport them to Nigeria due to the heavy presence of security operatives at the border.

“You don’t have to make a big deal about the customs, simply pay these nearby truckers; they will settle the authorities and cross the border with the bags. You just need to pay N200 to cross yourself,” the rice merchant, a lean man, replies.

I ask him to introduce me to one of the notorious smugglers as I need to be sure my goods would be not be seized by Customs officials.

The Nigeria Customs Service routinely arrests smugglers and confiscates the contraband they try to bring into the country. But they rarely stay in custody, not when bribes can be used to buy them freedom. But not every smuggler is content to take those risks and hope for success, some smugglers are actively thinking up ways to beat the Customs officers stationed in the region. Many smugglers have taken to executing their runs during the evening when they display their arms, prepared for battle with the officers that come across their way.

The high success rate for smuggling runs can be ascribed to the conceivable conspiracy between the smuggling rings and law enforcement agencies including the police who help to give them a “delicate arriving” for their unlawful cargo at checkpoints. These and more I discover from my trader plug’s delivery guy, a famous smuggler. “The Customs officials actually open the border for us at midnight to bring in our goods from 12 midnight to 2am,” he tells me.

Another smuggler I contacted explained that usually, a buyer would buy a large consignment of rice, frozen turkey and chicken, pasta, vegetable oil, used clothes or anything that is contraband and would contract them to transport it across to Nigeria, after bribing the border officials, especially the Nigeria Customs Service and Nigeria Immigration Service.

Abandoning the two smugglers I earlier contacted, I moved into the interior of the market to gain a more immersive understanding of the border’s smuggling practices. I engage a co-trader in a chat on how she moves her ‘contraband’ goods to Lagos hitch-free. “Every Wednesday, Thursday and Friday”, she says, “men and women flock to Cotonou and other neighbouring countries to buy rice and smuggle them in mostly on Sundays.

“After buying my bags of rice here, and getting to the border on my way back in order not to pay at the border, I contract 15 bike men to help me to transport the bags of rice to Badagry.

“So they convey the rice one by one and I find that those bike men were living in the neighbouring town of the border. So it was normally difficult for the Customs men to stop them and they really know some of these young men.

“When I get to the border, I simply stamp my international ID and pick my car to drive down to where I  pick my goods.

“I am always amazed that those young men really reach Badagry before me. Each pack of rice they convey is N1,500 and some can even convey two sacks. Most travellers, particularly the individuals who have more bags to convey like to be taken across the border in a tricycle than on a cruiser since it is less expensive.”

Corruption from the top

Over few bottles of beer, I,  engage a Customs Officer who isn’t on duty at that moment, posing as a resident of the community, we discuss on several issues ranging from politics to business. It is easy to earn his trust and confidence as he orders for more bottles – bills on me.  Once I am convinced he is sufficiently soused, I throw the one million dollar question: Why do security operatives at the border extort from travellers?

He alleges that their bosses in the workplace dependably expect fiscal returns from them either weekly or fortnightly. “Only an insignificant few don’t expect returns from officers and men on the field. “Practically 95% of our oga’s request returns from us”.

As indicated by him, the profits differ from one checkpoint to the next, contingent upon how occupied or lucrative the place is. There are bicycles from the carport around the border that cross individuals without travel papers to the Nigeria side, however, I chose to stroll through immigration checkpoints and borders. I wore a dirty polo shirt; old jeans rolled up to my knees; and walked barefoot. I carried my flip-flops in my armpit.

Posing as a vagrant, I passed by the officials who are meant to check entry and exit of individuals into and out of the country. Unfortunately, I was not stopped. Not that the Immigration authorities did not note me, they just did not feel the need to stop, check or question a man strolling into Nigeria. They were busy extorting and collecting bribes. It didn’t matter to them that I might have been carrying contraband of some kind or even possibly could have been recruited to join a terrorist group. I was allowed to walk free into the country…and you know what that means.

Motorcyclists play a noteworthy influence at the border. Suspected traffickers and dealers who endeavour to dodge paying bribes to border authorities utilise motorcycles and take back streets and bush paths either to Nigeria or Benin. These motorcyclists collect the negotiated transport fare and another fee allegedly used for bribing the security personnel manning the ‘small border road’ which is just another name for the back roads, bushes and alleyways they use. These back roads are manned by a few security men, supported by men in mostly old dirty mufti who use drums and sticks to barricade the road at three points and collect a token, from pedestrian, cyclists and vehicles.

On my last day at the border, I approach one of the motorcyclists — a bad-tempered young man and attempt to negotiate a fee for the return journey back to Nigeria. He tells me there are many illegal routes back to Nigeria, but that it is slightly more expensive getting across the border back to Nigeria this way, as he has to evade corrupt border officials or if he eventually runs into them, he would have to bribe them. The bush path, he decides on, is simply left of the high divider that isolates Nigeria and Benin Republic, and it is famously called ‘sharp corner’. Here, illegal immigrants are permitted to go through every checkpoint unchecked as long as they are ready to part with — an insignificant — 100 Naira.

Only a couple of metres into the rough journey, there is a barrier manned by Beninoise security authorities and the motorcyclist gives them a tip and the road is opened. On the Nigerian side as well, border officials station themselves underneath the shade of a roadside tree. It is hard ascertaining their identity since none of the four men and a woman situated in the tent have uniforms on.

As the cyclists wait for the wooden obstruction to be lifted, three different motorbikes with packs of rice and containers of frozen chicken come at top speed from behind, and the wooden hindrance is lifted even before they get to it. The three motorbikes that are given express entry at the post are part of a smuggling gang at the border well known to the authorities.

In continuation of its relentless onslaught in combating the smuggling of contraband goods, The Customs Area Controller Mohammed Aliyu said that the command will continue to do what it can to rid the border of smugglers. The comptroller stressed that the NCS Command, as an agency of the federal government, has always and will continue to enforce her statutory mandate of revenue generation, suppression of smuggling and facilitation of legitimate trade.

He said the command will also continue to protect the international land border against illicit smuggling and trafficking of small and light weapons across the border along the West African sub-region. The Comptroller assured all Nigerians that the present leadership of the Service led by Col. Hameed Ibrahim Ali (rtd) is ready to bring all erring officers who circumvent government efforts to face the consequences of their actions once their operations is seen to be at abeyance or not in sync with our core mandates. He warned all smugglers and perpetrators (economic saboteurs) of these illicit acts to desist from it or when caught will be made to face the full wrath of the law as others are currently being prosecuted.