Canadian real estate broker Martin Lavoie enjoys the finer things in life, and he has been spending his free time showing the 99-percenters what they’re missing.

Under the telling user name MrWallStreet83, the 29-year-old businessman has been flooding his Instagram account with pictures of high-end watches, tailored clothes and multimillion-dollar homes.

Until recently, Lavoie would take the time out of his busy condo-hawking schedule to share with his 483 followers photos of himself nonchalantly posing in perfectly pressed suits, looking at his exclusive watches or holding a cash fan of Canadian $100 bills. 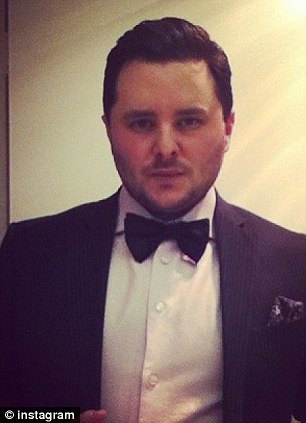 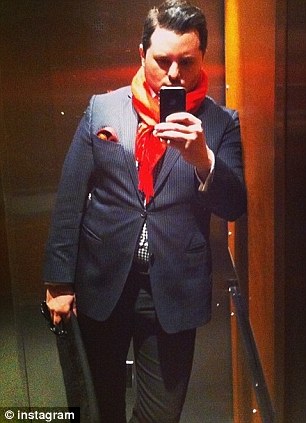 Trump wannabe: Canadian real estate broker Martin Lavoie, known on Instagram as MrWallStreet83, has been posting photos of his high-end watches, tailored suits and other trappings of wealth Finer things: Lavoie shared with his followers this image of Hermes ties in all colors of the rainbow Status symbols: A bottle of expensive cognac, a high-end watch and a wallet with cash peeking out are proudly on display on Lavoie’s Instagram account

The Instagram account, which was recently deleted along with Lavoie’s Facebook page, also featured numerous pictures of high-end penthouses with breathtaking views, some of which, he said, belong to his friends, according to New York Magazine.

And in case his followers were not convinced that the 29-year-old broker is the real deal, at one point he posted a picture of a receipt for $135,000 spent on exclusive booze, including a magnum of Armand de Brignac Nebuchadnezzar champagne with the eye-popping price tag of $100,000.

The coy broker later told the magazine that the jaw-dropping receipt belonged to a friend. 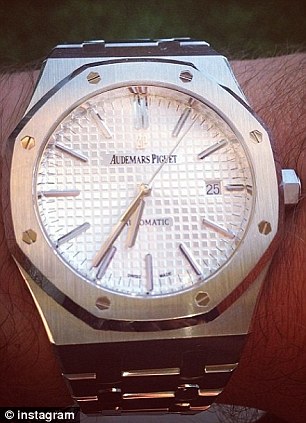 Material guy: MrWallStreet83 has not been shy about showing off his large collection of exclusive watches, including a Rolex (left) and an Audemars Piguet (right) 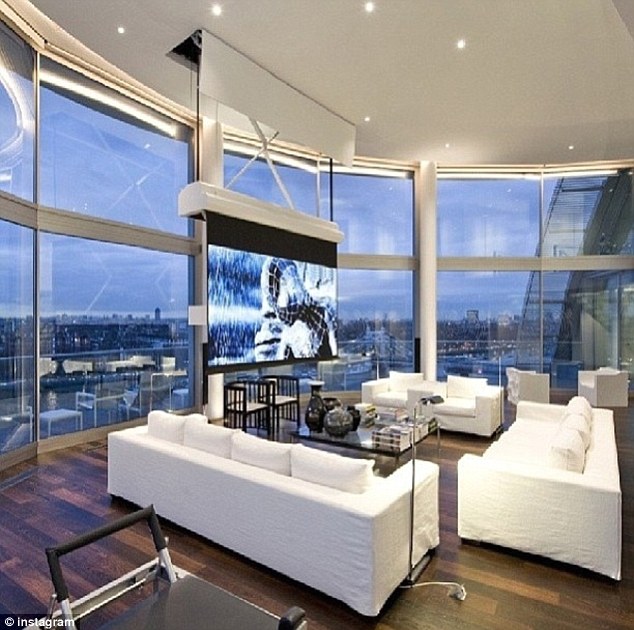 Room with a view: The Instagram account, which has recently been deleted, also featured numerous pictures of high-end penthouses with breathtaking views 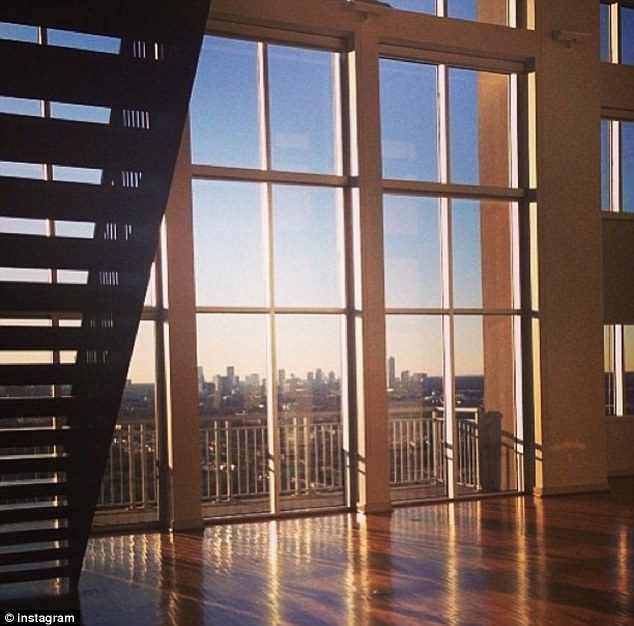 Playing coy: Lavoie pointed out that some of the penthouses he has been photographing actually belong to his clients 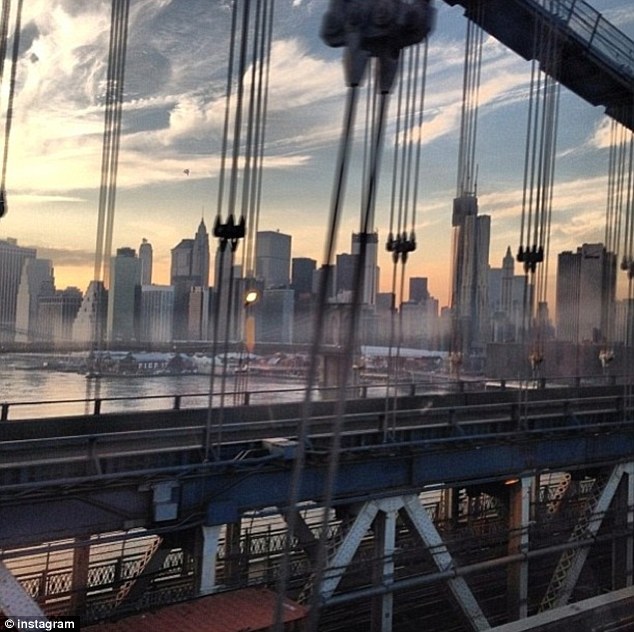 Subtle: Lavoie accompanied this snapshot of Manhattan skyline with the non-ironic hashtag #moneyneversleeps

To get his point across that life has been treating him well, the pudgy Canadian with a thick head of chestnut hair and a five-o’clock shadow has been supplementing his photos of Hermes ties and gold-embossed business cards with hashtags like #moneyneversleeps, #ARMANI, #wealth, #hedgefund, #fortune500 and #goldmansachs.

Although Lavoie works far from the heart of New York’s City’s financial sector where well-dressed stock traders roam free, he said that he selected his instagram user name, Mr Wall Street, with an eye for the future.

While some people may consider such public displays of excess and over-the-top luxury to be in bad taste, not unlike eating a steak dinner in front of someone who can’t afford a crust of bread, Lavoie believes that he is performing a public service. 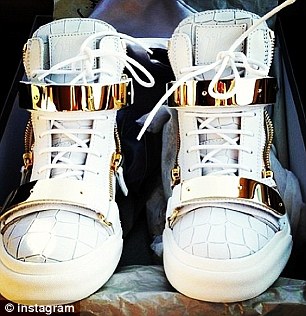 If the shoe fits: Lavoie clearly has a weakness for expensive footwear, like this pair of gold-accented high-top sneakers (right) 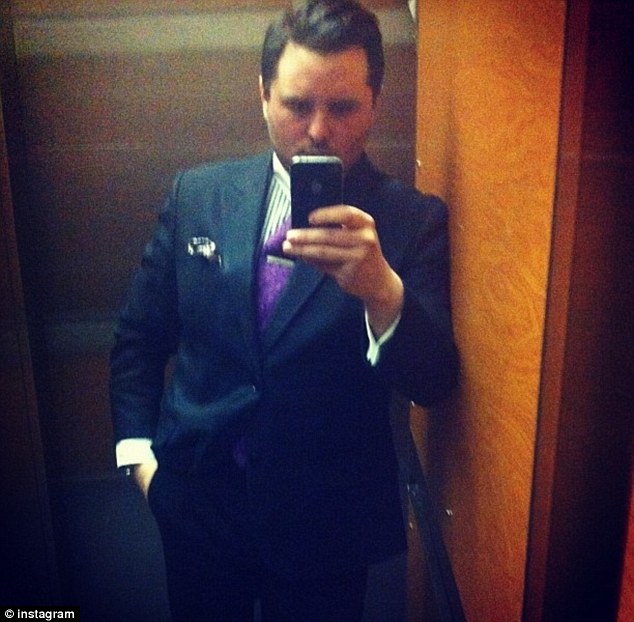 Role model: The 29-year-old broker said he wants to set an example for others by showing them his actual lifestyle, like this self-portrait with the hashtag #dress4success

‘I’m just trying to show people the good things in life,’ he told New York Magazine. ‘If I go somewhere, I’m staying in a nice hotel. I’m not cheap with the cars I’m driving, the clothes I’m wearing.

‘Perhaps I don’t live the Trump life, but I’m happy with what I have in my life so far.’

Lavoie emphasized that he was ‘not trying to be cocky’ by sharing with the world photos of Lamborghinis and gold-accented sneakers, but rather that he wants to set an example for others by showing them his actual lifestyle.

According to his online profile, Lavoie lives in Montreal and works as a broker for the London Reality Group Inc. 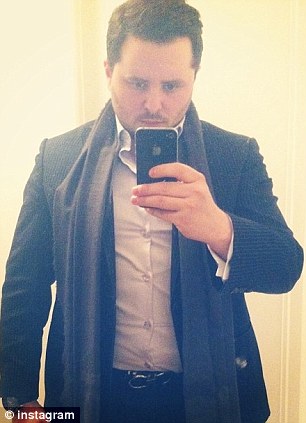 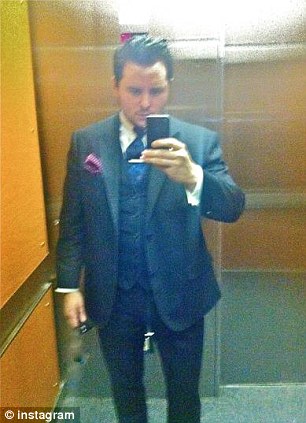 Lavoie graduated from Concordia University with a bachelor’s degree in commerce and also attended a local real estate school, the College de L’immobilier.

‘Perfectly aware of tastes and needs of the younger generation of professionals as well as the accomplished ones, Martin is very familiar with the downtown core market,’ his profile boasts.