Gruesome: Woman gathers her family to pray just before killing them (PICTURED)

Just hours before she killed her two sons, her ex-husband, her stepmother and then tried to frame one of her dead children, a South Carolina mother suffering from multiple personalities gathered her family to pray.

‘I know it sounds pretty fricking bizarre, but we pray a lot as a family,’ Susan Hendricks told investigators in October 2011 at the Pickens County Sheriff’s Office, just hours after authorities discovered the bodies.

According to new audio just released in response to a Freedom of Information Act request from The Associated Press, the South Carolina mother initially tried to tell investigators that her son Matthew, 23, had committed the murders in October 2011 before turning the gun on himself.

However, it later emerged she was mentally ill, with multiple personalities and an inability to tell right from wrong when she committed the murders – which she plead guilty to in April.

Susan Hendricks, 49, pleaded guilty but mentally ill to four counts of murder and accepted a life sentence in a plea bargain with prosecutors.

As well as the three hour 2011 interview with police, the Associated Press got hold of 324 pages of documents and more than 600 crime scene photographs.

The documents include details on Hendricks’ suicide attempt behind bars nine months after her arrest, as well as the fact that her younger son, 20-year-old Marshall, had just moved back home two days before the shootings. 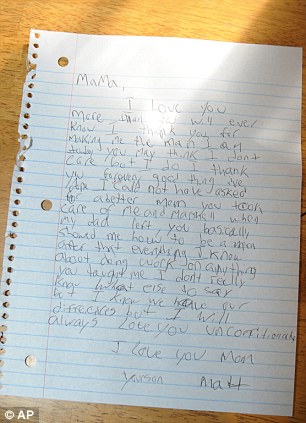 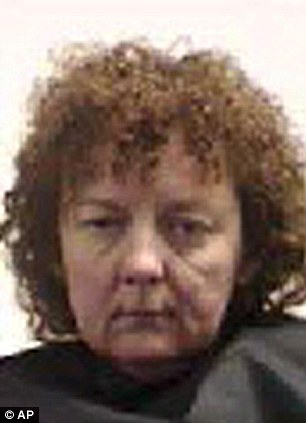 They also revealed that Hendricks had papers from insurance policies and wills spread throughout her motel room at the time she was taken into custody.

Hendricks’ acquaintances, whose statements are contained in the documents, said she kept large insurance policies on all the victims, fired gunshots at her sons’ feet when she was angry, and would often remind people that she shot and killed a man who broke into her home in 2006.

She claimed self-defense and was never charged in that killing.

The ballistics and other crime scene reports contained in the documents detail a quick, brutal ambush.

Blood stains and three cartridge cases show Hendricks cornered Marshall in a hallway between his bedroom and a bathroom.

He eventually got around her but she managed to fire one more shot that took him down. He died on the front porch, where he was covered with a sheet. Mark Hendricks was killed lying on the couch. 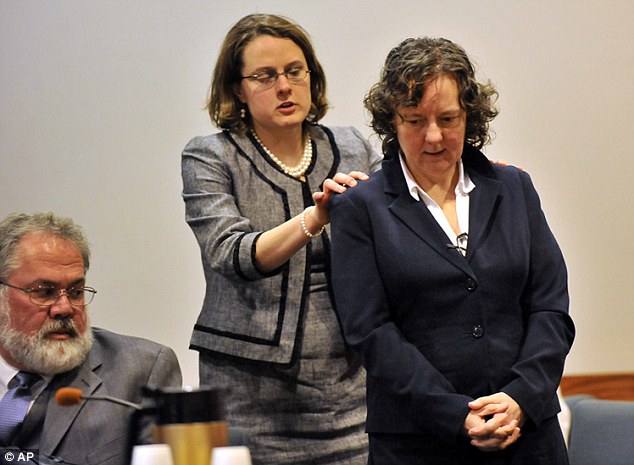 Punishment: Hendricks pleaded guilty but mentally ill to four counts of murder and accepted a life sentence in a plea bargain 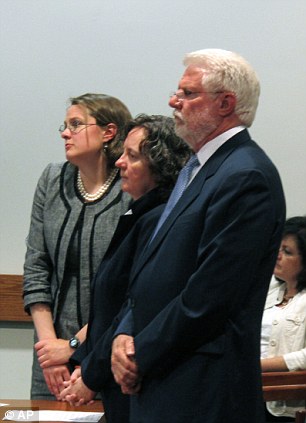 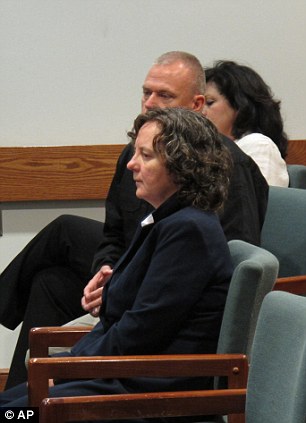 Mental case: A psychologist testified that Hendricks, who has multiple personalities, was seized by one that didn’t know right from wrong when she killed her sons, ex-husband and stepmother 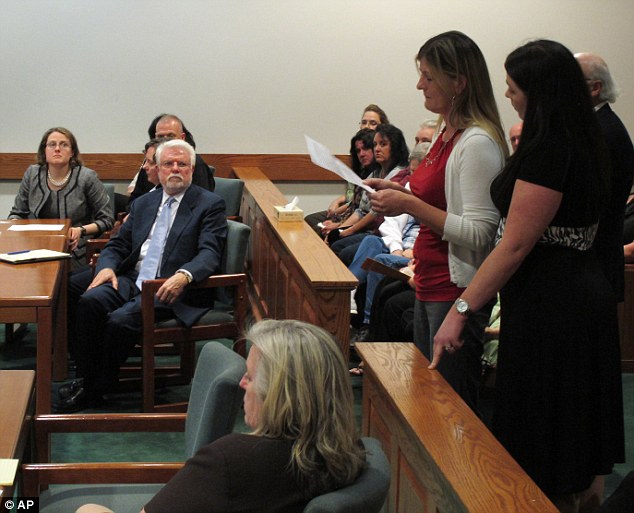 A report from the crime scene said Burns’ body was covered up in her bed as if she were sleeping. Five cartridge cases were found in and around a closet in her room. Matthew Hendricks was found in his bed with one gunshot wound to his head. His body had also been covered up.

Hendricks’ sister Evelyn Burns told police it was she who dialed 911 after Hendricks called her and casually remarked during what started as a routine chat that her son had shot himself.

In her interview at the sheriff’s office, when she still was claiming Matthew committed suicide, Hendricks explained why she didn’t call authorities immediately.

She didn’t speak much about Marshall, Mark Hendricks or Linda Burns during the three hours of questioning, but instead repeatedly turned the conversation back to Matthew.

She told investigators she heard nothing during the night and had walked to the kitchen – past a trail of blood in the living room – to make coffee when she found a note from Matthew. She said when she read it, she became alarmed he had harmed himself.

In the note, which reads more like a kind Mother’s Day letter, Matthew thanked his ‘mama’ for making him the man he has become and said he couldn’t ask for a better mother.

‘I don’t really know what else to say, but I know we have our differences, but I will always love you unconditionally,’ he wrote at the end. 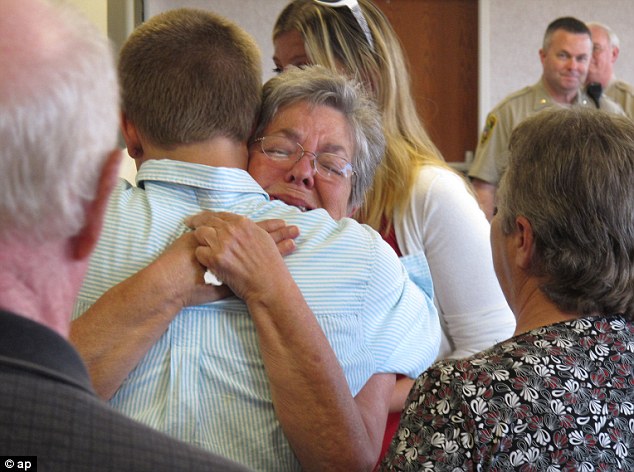 Emotional day: Family members of victims weep and hug outside of court after Susan Hendricks was sentenced to life in prison

Although handwriting experts confirmed the note was written by Matthew, authorities said they believe it had been written at a previous time, and that Susan Hendricks saved it, then retrieved it at the time of the killings.

In the audiotaped interview, Hendricks doesn’t cry much and her voice sounds flat, emotionless and tired much of the time. Most of the sobs come at the end of the questioning when she says she can’t give a written statement and wants to go home.

Detectives fanning out across Pickens County gathered dozens of statements detailing a fractious relationship between Hendricks, her sons and her ex-husband.

Mark Hendricks’ sister, Rhonda ‘Suzy’ Chappell, told deputies that Marshall lived with her for two months after his mother kicked him out, and that at his father’s request, he had moved back two days before he was killed.

‘This has been a very dysfunctional home for many years and she saw that the boys were working their way out and she was losing her grip,’ Chappell wrote in a statement to investigators.

An ex-boyfriend of Susan Hendricks, Rudy Parra, told deputies that Hendricks told him she had shot a man who came into her house uninvited in 2006. She then showed him three guns she kept in a safe in her closet. 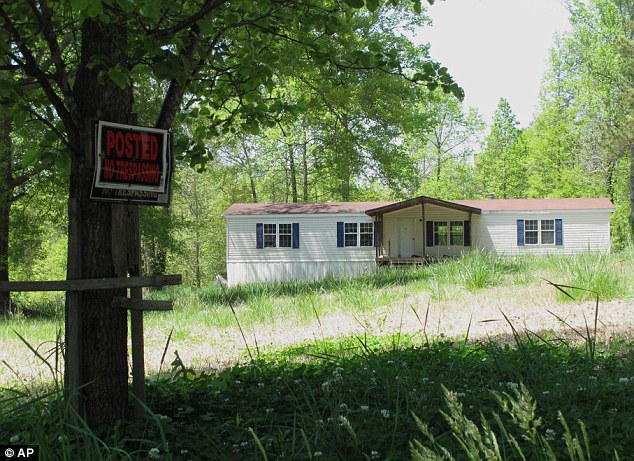 Crime scene: Two crosses lean against a tree outside of Hendricks’ home on Friday, in Liberty, SC, which became the scene of a deadly shooting rampage in 2001

In that same safe, detectives later found insurance policies for each victim, payable to Susan Hendricks and with a combined value of more than $680,000.

A Pickens County printing shop owner told detectives Hendricks came to his shop six days after the killings and asked him to notarize her changing the executor of her will from her sister to one of her brothers.

When she was arrested 10 days after the shooting, an officer noted numerous wills and financial documents on the floor.

Nine months after her arrest, Hendricks tried to commit suicide, according to a police report included in the cache of released documents.

A female cellmate told authorities Hendricks squirreled away 40 pills she was given for her mental problems and tried to overdose. Hendricks left a note to her family telling them not to fight.

‘I’ll be okay with Mark and the boys,’ she wrote. ‘See ya another day.’

During her plea hearing, a psychiatrist identified as David Price testified that she was abused by both of her parents, and that her parents also let others abuse her. Hendricks declined to speak at the hearing.

Price said Hendricks developed several personalities as a coping mechanism during the abuse. While the dominant one knew right from wrong, the one in charge the night of the killings didn’t, he said.

Included in the crime scene photos are images of Hendricks’ home, including her bedroom, which was clean and tidy and equipped with a disco ball that she said she used when she danced as part of a weight-loss program.

Other photos show the rest of the house in disarray.

And then there is image No. 84, a photo of a photo, tacked with a push pin next to a fly swatter, on a wall of what looks to be a kitchen.

It shows a smiling Hendricks in a dress standing next to her ex-husband in coat and tie, their two well-dressed sons flanking them on either side.