What is it with Ndigbo and greed? || Etcetera goes hard on Igbo leaders 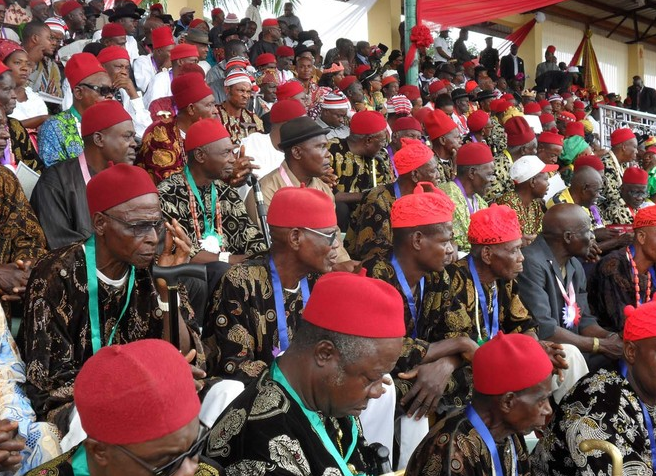 The Guitarman cum writer, Etcetera has chosen to attack the Igbos in his latest article.
According to him, Igbo leaders have been asleep since the death of their late leader, Emeka Ojukwu.
He started with praises for the Biafran leader before going to town.
Read his post below:
“I was told that every Igboman who heard Ojukwu’s speech after the Biafran war was filled with a renewed sense of pride and hope. A hope that one day the Igbo nation will rise and become a force of reckoning not just in Nigeria but in the entire black world. I have read that speech over and over and each time I read through, I am filled with pride and imagination of how those who heard the words pouring out of the mouth of the warlord himself must have felt.
Before going any further, let me recount a little part of what the late sage said while addressing the press: “In the three years of the war, necessity gave birth to invention. During those three years of heroic bound, we leapt across the great chasm that separates knowledge from know-how. We built rockets, and we designed and built our own delivery systems. We guided our rockets. We guided them far, we guided them accurately.
For three years, blockaded without hope of import, we maintained all our vehicles. The state extracted and refined petrol, individuals refined petrol in their back gardens. We built and maintained our airports, maintained them under heavy bombardment. Despite the heavy bombardment, we recovered so quickly after each raid that we were able to maintain the record for the busiest airport in the continent of Africa. We spoke to the world through telecommunication system engineered by local ingenuity; the world heard us and spoke back to us! We built armoured car tanks. We modified aircraft from trainer to fighters, from passenger aircraft to bombers. In the three years of freedom we had broken the technological barrier.
In three years we became the most civilised, the most technologically advanced black people on earth.”Ojukwu, with those few lines, defined the ingenuity and never-say-die spirit God has embedded in the marrows of the Igboman.”
Moving on, he condemned the Ndigbos saying “But my question for Ndigbo is, where has this ingenuity for which the entire world has given them a standing ovation, gone? Why can’t it be used today to enhance the cause of Ndigbo? Can’t we re-enact the same war time feat to launch ourselves back to reckoning again in Nigeria and in the entire black world?
Since Ojukwu died, Ndigbo have been like sheep without a shepherd. Those who we thought could take up the mantle of leadership are nothing but selfish entities who care for nothing but their personal interest. As I am writing this article, I just got words that a senator in Imo State has been discovered as a saboteur working against the interest of his people because he has been promised to be made Senate president in the new political dispensation which begins on May 29.
What is it with Ndigbo and greed? How long are we going to kill ourselves? Isn’t it a gargantuan shame that a tribe as populous as Ndigbo can’t provide a single individual that is seen to be credible enough to be elected president of Nigeria? A casual observation of the performances of the governors of the south eastern states will reveal their level of under-performance since 1999. Case point, take Aba which has failed to enjoy any meaningful development since the 1929 Aba women riot. The place is a total mess. What have the governors done with what has been accruing to the state in the last 16 years of democratic rule?
The fact that these individuals who have mismanaged fortunes of the state consider themselves fit to even contest election is a slap on the faces of Ndigbo. Ndigbo, are we cursed? The red-cap goons known as Ohaneze do nothing but crawl from one place to another offering themselves for sale and for use. This has been their money-making scheme for too long and it can no longer hold water. Can’t we take a cue from the style Dangote adopted and made a kill?
The Yoruba have already adopted it and it is working. We have to restrategise to become that economic power house we crave. The idea that every Igboman who makes money whether through his ingenuity or by accident becomes misguided and begins to push for political office even though they are clearly not professional politicians should be discarded.  We hear of Dangote, the Dantatas, Otedola, Mike Adenuga, the Okoyas, where are the Igbo equivalent in terms of their organisational set-up? Most of our businesses are largely one-man businesses and whenever the founder dies, the whole thing dies. Ndigbo must do away with their selfishness and personal greed, otherwise we will continue to languish as a people.
We must redirect our thoughts away from the deeply engrossed notion of “to make it in life,” “we must make money at all cost.” What Ndigbo should learn from the just concluded elections is that without a harmony of opinion, all our efforts will yield nothing. Igbo kwezuenu,” he concluded.
Tags: Dangote, Etcetera write ups, mike adenuga, Ndigbos, otedola, the Dantatas, the Okoyas