His hand clamped over her mouth to stifle a ‘bone-chilling’ scream for help, a fiancé wrestles his bride-to-be – minutes before she plunged 15-storeys to her death.

Lisa Harnum was allegedly heard yelling, ‘please help me, God help me’ as she fought for her life on the balcony of the luxury flat she shared with Simon Gittany in Sydney, Australia, on the night of July 30 2011.

But nobody came. Moments later she was lying dead, her body 150-feet down on the footpath below.

And today it was revealed the 30-year-old’s terrifying last moments were captured on the very pin-hole camera ‘controlling and abusive’ Gittany set up to spy on her every move. 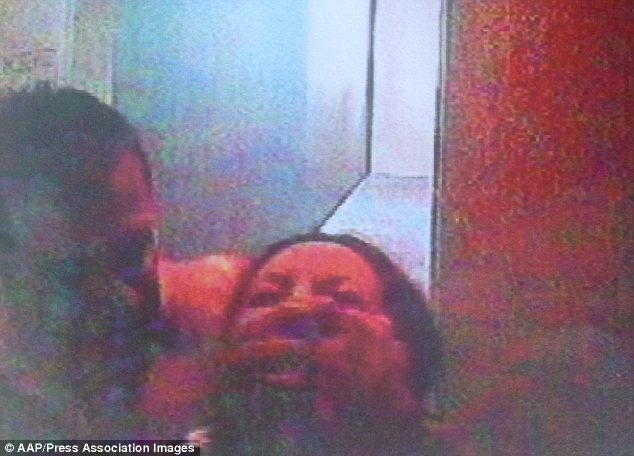 Terror: His hand clamped over her mouth to stifle her ‘bone-chilling’ screams for help, a shirtless Simon Gittany wrestles fiancee Lisa Harnam – minutes before she plunged 15-storeys to her death. The footage was captured on a pin-hole camera that he set up in the flat to spy on her

JeaGittany, 37, has pleaded not guilty to murdering his Canadian-born fiancee claiming he was trying to save her from suicide before she fell.

A neighbour, however, claims he saw a topless man ‘fist-pumping’ on the terrace after something had gone over the edge. 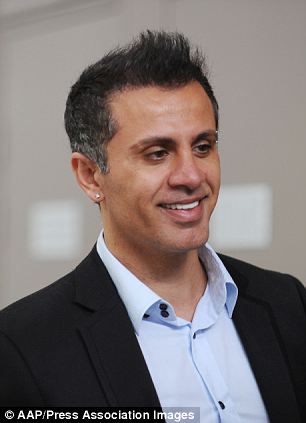 At court: Gittany, 37, denies murdering Canadian-born Miss Harnam on July 30, 2011, claiming he was trying to stop her from jumping

Another witness walking past The Hyde luxury apartment block in the heart of the city told police he saw a topless man holding what appeared to be black luggage horizontally over the balcony before it fell to earth.

‘Of course, it was not a piece of luggage, it was Ms Harnum wearing black clothing,’ Crown prosecutor Mark Tedeschi QC said today at Gittany’s murder trial.

Gittany was so jealous, Mr Tedeschi claimed,
that he had banned her from seeing friends, forbade her from taking a job as a hairdresser and even hired a personal trainer to come to their home so she wouldn’t go to the gym where he thought she would be ogled by other men.

Describing Gittany as ‘controlling and abusive’, Tedeschi said he made her become Catholic, do her hair and dress exactly how he told her.

‘(He believed) it was her function in life to submit to his will as the male in the relationship,’ he said.

But his vice-like grip over her life was still not enough, the court heard. Mr Tedeschi told jurors Gittany even set up a network of mini cameras around the apartment to keep tabs on her and secretly read her emails and text messages.

It was because of this forensic campaign of surveillance that he caught wind of her plan to leave him with the help of two friends, the court heard. As a result he allegedly abused one of them over the phone, advising them to stay away.

In the months leading up to her death, the court heard, Miss Harnum had become so fearful of her fiance’s jealous rage that, when she did venture outside, she only ever stared at the ground or into his eyes for fear he might accuse her of looking at other men. 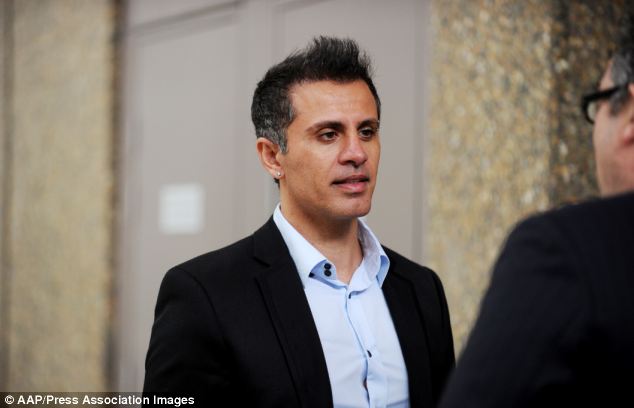 Reign of fear: In the months leading up to her death, the court heard, Miss Harnam had become so fearful of Gittany’s jealous rage that, when she did venture outside, she only ever stared at the ground or into his eyes for fear he might accuse her of looking at other men

Giving evidence today, Canadian-born Miss Harnum’s mother said told the court: ‘She told me he was always very controlling and wanted to always know where she was, what she was doing, who she was with, what she was wearing.’

She said when Miss Harnum plucked up the courage to tell Gittany she was leaving him, he threatened to destroy her chances of getting permanent Australian residency – a dream she had harboured since moving to the country.

Gittany’s defence barrister Philip Strickland SC said Ms Harnum was a ‘conflicted, complicated and confused woman’ prone to over-reacting when she didn’t get her own way.

Mr Strickland said Gittany only monitored her text messages via a computer program because she had told him she had a secret that she couldn’t disclose to him.

‘The secret ate into their relationship,’ he said