Sanusi is on “suicide watch”? | Read this report

The guys at 247UReports.com are reporting that the former governor of the Central Bank of Nigeria and Emir of Kano, Sanusi Lamido Sanusi is on suicide watch and the “verge of collapse”.

This is how they report it:

Shortly after Sanusi Lamido Sanusi’s controversial ascension to the seat of Emir on June 8, 2014, of which some believed was a politically motivated appointment by the governor of Kano State, the occupant of the seat of Emir began exhibiting symptoms of severe clinical depression. The symptoms reportedly grew worse. According to our source, the occupant of the Emir’s seat, began having thoughts of suicide. “He is suicidal. He is secretly being watched by his close aides”, said the source.

The source pointed particular attention to the nature of the seat of Emir as being highly spiritual and/or traditional. “Not anyone can just mount the seat because he can or because he has political connections with the high ups” noted the source who went to explain that the former Central Bank of Nigeria Governor, Sanusi Lamido Sanusi may have not been the rightful heir to the throne of Emir of Kano in the traditional sense as understood by the elders and handlers of the traditional stool. He pointed to long laid down custom of selecting an Emir after the death of Emir. According to the source, when an Emir lasts in the office of Emir for up to 50years, his first son ascends to the throne automatically without contest.

Malam Sanusi Lamido Sanusi is the grandson of Muhammadu Sunusi, the 11th Fulani Emir of Kano. His grandfather however did not last up to 50 years at the throne. 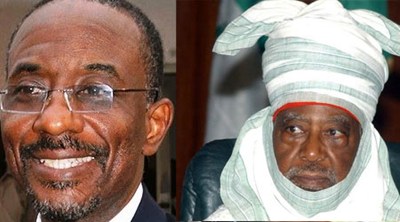 “Ado Bayero was Emir for over 50 years”, continued the source. The elders and handlers of the stool were aware of the customs and were prepared to crown the son of Ado Bayero when the Governor of Kano intervened. He added that the former CBN governor’s name were not among the names recommended by the handlers of the traditional stool to the governor for crowning as Emir. “They don’t know the repercussions”.

Another source from a popular political family, the Yankassi family in Kano who is considered a family friend to the Sanusi Lamido Sanusi family also called the claim of Sanusi Lamido Sanusi being clinically depressed false. In his words, “Very untrue. In fact I just came out from a meeting with him and he looks very stable with sound mind”. 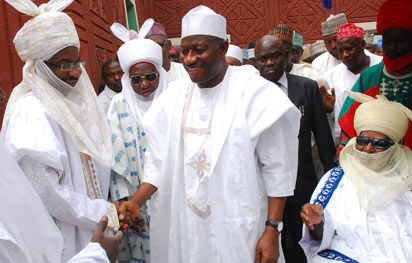 Then the story gets even dodgier from this paragraph:

Those who call this site a hatchet tool for the Jonathan administration will note this:

But feelers coming out of the presidency in Abuja indicate that Sanusi Lamido Sanusi’s problems may just be beginning. A very credible source indicates that the Jonathan administration has launched a broad investigation into the activities of the former CBN governor. Three anti-graft commissions are said to be tasked with the investigation. The source explained that the uncanny silence on the part of the new Emir has to do with the new unearthed information on his financial activities while at the realm of activities at the CBN. One of the many damning information uncovered included the acquisition of an Islamic Bank – while still at the CBN top seat. There are also unclear links discovered by security operatives to groups in Sudan suspected to be securing funds for violent Jihadist operations across the African continent.

And, ah yes, after line and line of speculation, they end with this?