Sore loser? Saudi prince sues Forbes for estimating his fortune at ONLY $20 billion 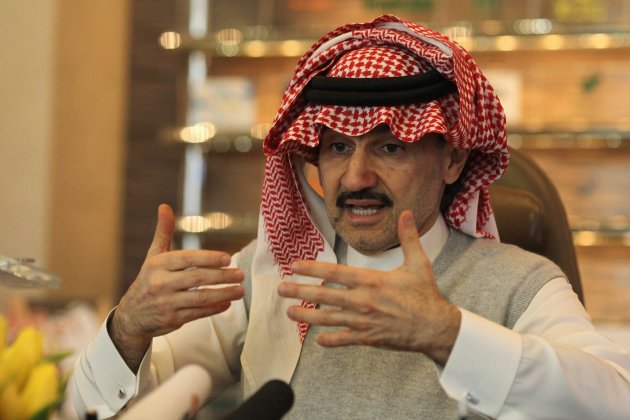 Saudi Arabia’s Prince Alwaleed bin Talal, one of the world’s wealthiest businessmen who owns assets including London’s Savoy hotel, has launched a libel action against the business magazine Forbes over claims it underestimated his fortune by $9.6bn.

Alwaleed, who is often described as the most influential businessman in the Middle East, vowed to sever ties with Forbes in March when its coveted annual Rich List valued him at $20bn – placing him as the 26th most wealthy billionaire on the planet.

The prince insisted he was worth closer to $30bn and accused the respected US magazine of being “demonstrably biased” against Saudi Arabian firms.

Now Alwaleed has taken his complaints about the magazine to the high court in London, filing a defamation claim against the Forbes publisher, its editor Randall Lane and two of its journalists, according to court documents seen by the Guardian.

Through his Saudi-based investment vehicle, Kingdom Holding, Alwaleed owns large stakes in Apple, Twitter and Rupert Murdoch’s News Corporation and has built a formidable property portfolio, including the Savoy Hotel in London and the Plaza in New York.

Alwaleed is known for his opulent lifestyle – a gold throne sits in the centre of his private Boeing 747 jet, dubbed “the flying palace” – but his displays of grandeur rarely spill into public disputes with the media.

Forbes said it calculated his fortune based on the underlying value of Kingdom Holding’s investments, rather than the price of its shares on the Saudi stock exchange, the Tadawul. The magazine said the company’s share price inexplicably rose each year as it was compiling data for its Rich List and quoted a former Alwaleed executive who described the Tadawul as a gambling site.

Forbes also claimed it had been subject to “intermittent lobbying, cajoling and threatening” by Alwaleed’s coterie of advisors in a bid to boost his ranking on the annual list.

In a Sunday Telegraph interview last month, the 58-year-old attacked Forbes and said: “They are accusing me of market manipulation. I am not pursuing it because of my wealth, but because they are accusing Saudi Arabia of being manipulated because we have no casinos. This is unacceptable.”.

Forbes said in a statement in response to the libel action: “We’re very surprised at claims that Prince Alwaleed has decided to sue Forbes, particularly if he has done so in the United Kingdom, a jurisdiction that has nothing whatsoever to do with our recent story which raised questions about his claims about his wealth.

“The Prince’s suit would be precisely the kind of libel tourism that the UK’s recently-passed libel reform law is intended to thwart. We would anticipate that the London high court will agree. Forbes stands by its story.”

Legal experts said Alwaleed will have to prove that his reputation in England and Wales suffered “serious harm”, if the lawsuit is eventually tried at the high court. He will also have to show that the Forbes publication caused Kingdom Holding serious financial loss.

Richard Green, a partner and head of regulation at the law firm Hill Dickinson, said the case would cement London’s reputation as the libel capital of the world. “While I accept that Forbes magazine is published in England and Wales both in hard copy and on the internet, it is difficult to see why this is the most appropriate forum for the case other than its perceived pro-claimant reputation,” he added.

“Libel tourism is common and is widely credited with damaging freedom of speech in the defendant’s home jurisdiction.”

However, Sarah Webb, a partner at law firm Payne Hicks Beach, said Alwaleed has a “substantial international reputation” but added that there were protections for media defendants to prevent so-called libel tourism.

“He will have to satisfy the court that England and Wales is clearly the more appropriate forum for his dispute and this will tie in again to the ‘serious harm’ test [to his reputation],” she said.