Shirt made of pure gold goes for $250,000: Indian man hopes it will help him get married (LOOK) 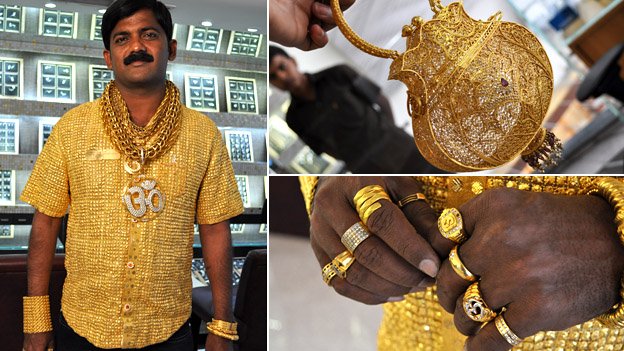 An Indian man has bought one of the world’s most expensive shirts, made with more than 3kg of gold and worth $250,000. His is an extreme case of an Indian obsession with the precious metal.

Datta Phuge’s nickname is “the gold man”, and it’s easy to see why.

His knuckles, neck, and wrists are weighed down by the precious metal – signet rings, chunky bracelets, and a medallion that even an Olympic champion might envy.

And on top of that, draped resplendently around him, glittering in the light, is a shirt of gold.

It’s an extravagant fashion statement, to say the least, but for Phuge it’s an important one.

“Some people ask me why I’m wearing so much gold but it was my dream. People have different aspirations. Some elite people want to own an Audi or Mercedes, and have big cars. I chose gold,” he explains. 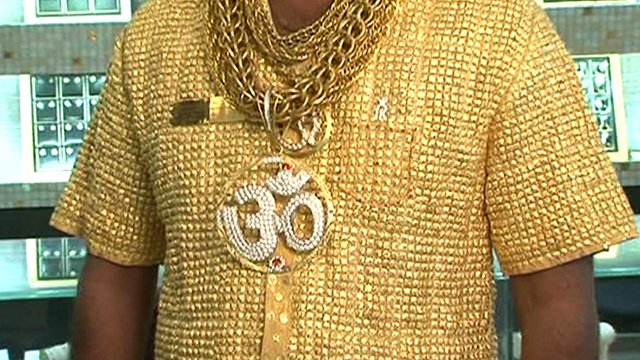 He has cars too, of course – five of them.

Given its impractical nature, the shirt only gets an outing on special occasions, like parties and important functions.

It elicits a mixture of reactions, Phuge says. Some people are impressed. Others are sniffy about what they regard as the excessive bling.

Either way, to ensure the shirt stays on his back, Phuge has a security guard with him wherever he travels.

“The challenge was to make this as comfortable as wearing a normal shirt,” says Tejpal Rankar, of Rankar Jewellers, a 133-year-old business in Pune, a few hours’ drive from Mumbai.

“Once we decided to make the shirt we researched designs and patterns. We didn’t want it to be like wearing a sheet of gold.”

To that end Rankar and his team of craftsmen decided to make a gold cloth based on an Italian weave, using a special machine.

They drew inspiration from old images of Indian kings wearing suits of armour. To prevent it scratching, they stitched a velvet lining inside. 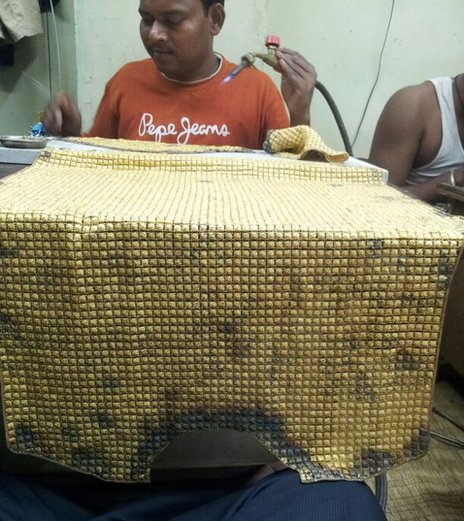 The finished shirt is – as this writer can testify – heavy to wear and a little clunky. It can’t be washed so care needs to be taken not to let it get dirty, or indeed too sweaty. The latter is unavoidable in an Indian summer.

Phuge says wearing it makes him feel good. For him it is the ultimate manifestation of achievement and gives him a status he has craved since he was young. 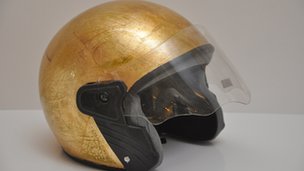 “When I was at college, people would say you were from a rich family if you had gold. So from the age of 20, I started wearing gold. Back then in smaller quantities, like 10 or 15g.”

Actually, he wasn’t from a rich family, he was from a humble background.

He made his big break as a property speculator, then became a money lender in the town of Pimpri Chinchwad, outside Pune.

Every six to eight months, when his company turns in a profit, he buys something else made of gold. Next on his list is a mobile phone made entirely from gold, and perhaps a pair of gold shoes.

Some press reports have suggested Phuge only bought the shirt to woo women but he is happily married to Seema, a government worker, who also has a penchant for the precious metal.

“She owns 500kg of gold, I’ve bought her necklaces and bags made from it,” he says proudly.

But Phuge is also keenly aware of gold’s value as an investment.

“If the need arises, I can sell the shirt and have the money,” he says.

Previously in the Magazine 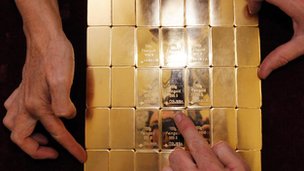 “If you have a gold watch, some of the gold in that watch could have been mined by the Romans 2,000 years ago.”

“Gold has become a status symbol or a symbol of wealth… especially in the last 10 years we’ve seen a lot of people kind of showcasing their gold ornaments or trying to become more flamboyant.”

As the symbol of the Hindu goddess, Lakshmi, gold is seen as very auspicious. It is used to decorate Hindu deities in temples, and traditionally given as a gift at weddings.

According to Mehta, of the 18,000 tonnes of gold which is held in India, about two-thirds is in rural areas. Among the millions of people without bank accounts, gold is seen as an alternative way of saving.

Rankar says he is seeing more and more requests for gold handbags and belts and there’s been a rise in the number of Indians buying gold bars, which can now even be acquired from some ATMs. 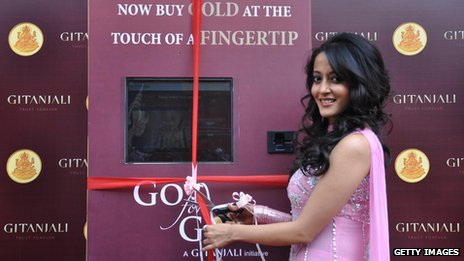 Gold-leafing, where 24-carat gold is applied to an object, is also becoming more popular, says Shezhad Khan, of the Gold Leafing Studio, Mumbai.

The company has recently been asked to gold leaf a toilet for a client, and also added a golden touch to the staircase at the world’s most expensive home, Antilia, the Mumbai high-rise owned by the country’s richest man, Mukesh Ambani.

For Datta Phuge, whose shirt which could have paid for a luxury house abroad, or a number of extra cars, it was money well spent.