So sweet: Charlize Theron spotted with her baby boy wrapped up in her arms (PHOTOS)

Facing motherhood alone is a daunting task for any woman, but Charlize Theron has clearly settled into life as a single parent well, and obviously prefers to keep her baby as close to her as possible.

Cradling baby Jackson in her arms, the actress looked maternal whilst her outfit and hairdo was far more androgynous.

Still, she was the perfect picture of a modern mother, doing it alone, and doing it well. 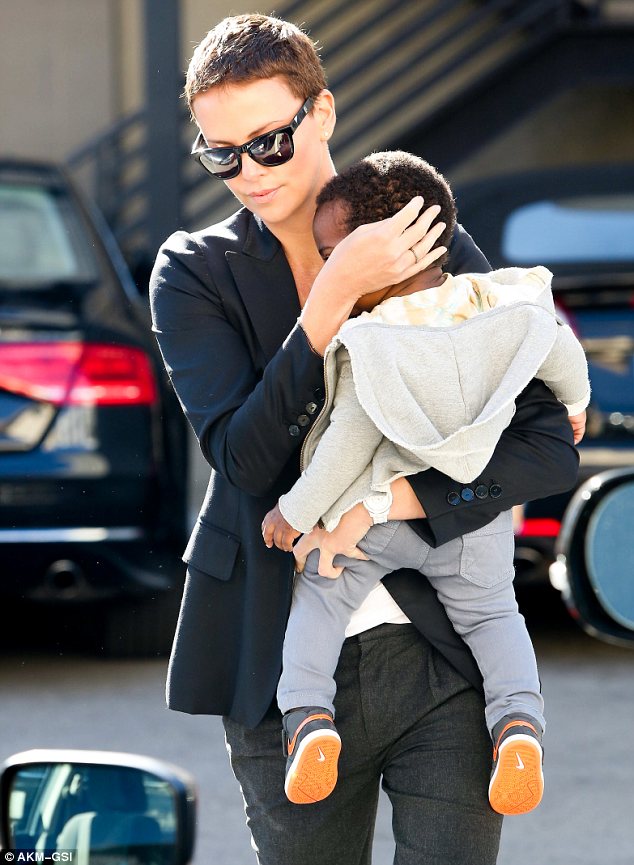 Darling: Charlize Theron cradles her son Jackson out and about in Beverly Hills

On the same day, Charlize met up with Ted star Set MacFarlane at Beverly Hills hotel.

The actor – who created Family Guy – will be hosting this year’s Academy Awards ceremony in February.

An Oscar winner herself – Charlize could give Seth a little advice on how to handle the stage, but as a naturally funny guy with critically acclaimed TV shows under his belt, one would assume he’ll know how to work a crowd, especially if it’s made up of celebrities. 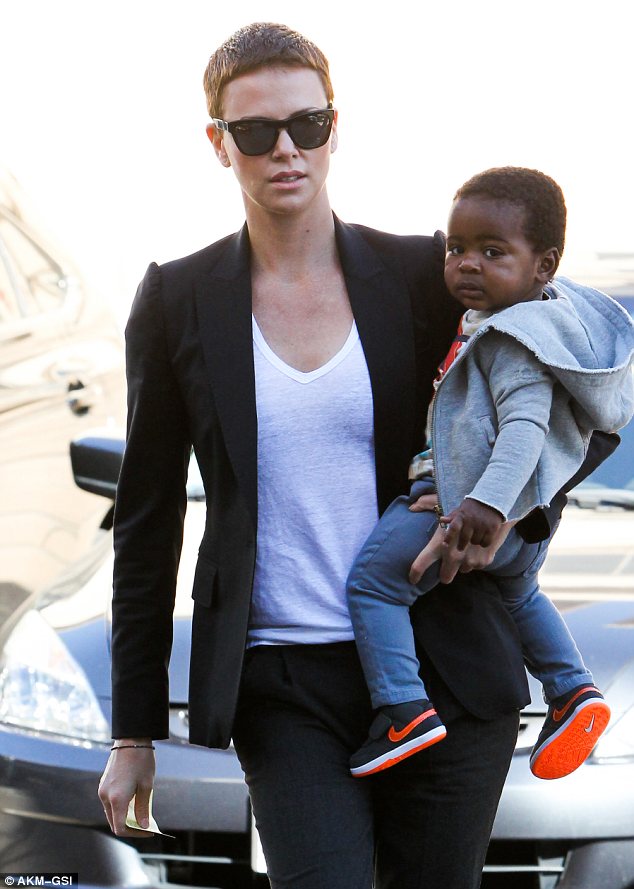 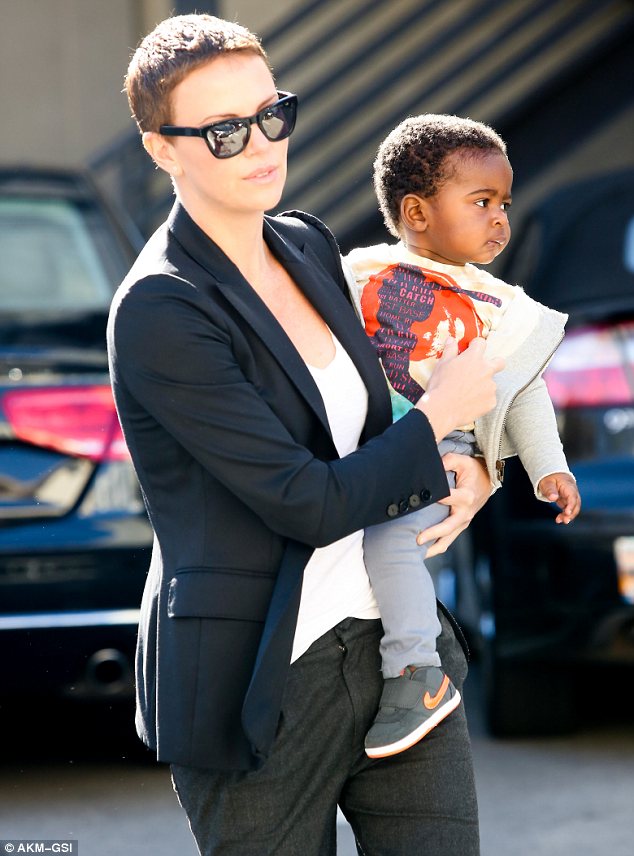 Suits you: The actress’s hair has grown out into a chic style after shaving it for a film role

The Prometheus star announced her adoption news in March and took home Jackson soon after.

Her decision to adopt no doubt shocked fans, but apparently Charlize has known she would go down this path to motherhood since she was a little girl.

Opening up, the 37-year old has spoken about a letter her mother had found which she had written aged eight.

Destiny: As an eight year old, Charlize said to her mother that she would adopt a baby when she was older 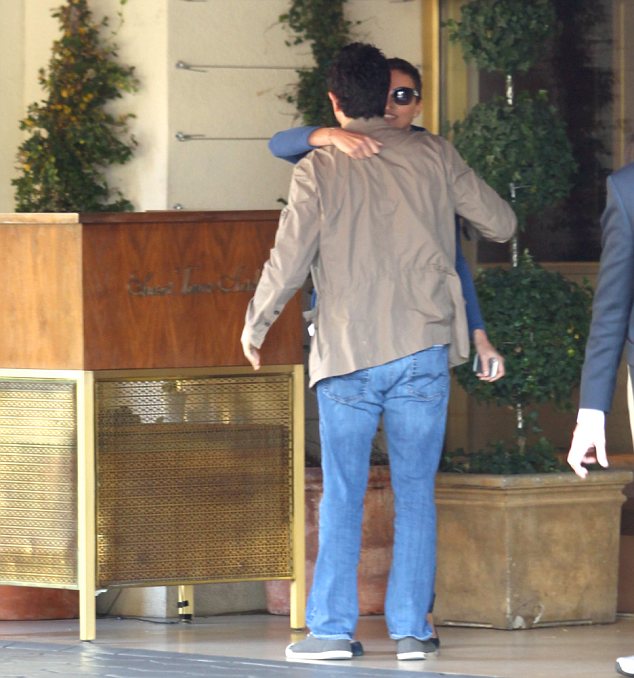 Hug-a-bear: Charlize met up with Ted star Seth MacFarlane later in the day

According to Charlize, it said, ‘Would you please take me to orphanage, so that I can go and adopt a baby?’

‘I always knew I would adopt – always,’ she shared.

The actress doesn’t have any films schedule for release until 2014 where she will be getting back into action in Mad Max: Fury Road with Tom Hardy as the title role.

So 2013 could be the perfect year for her to spend as much time with her son as possible, and catch up with friends. 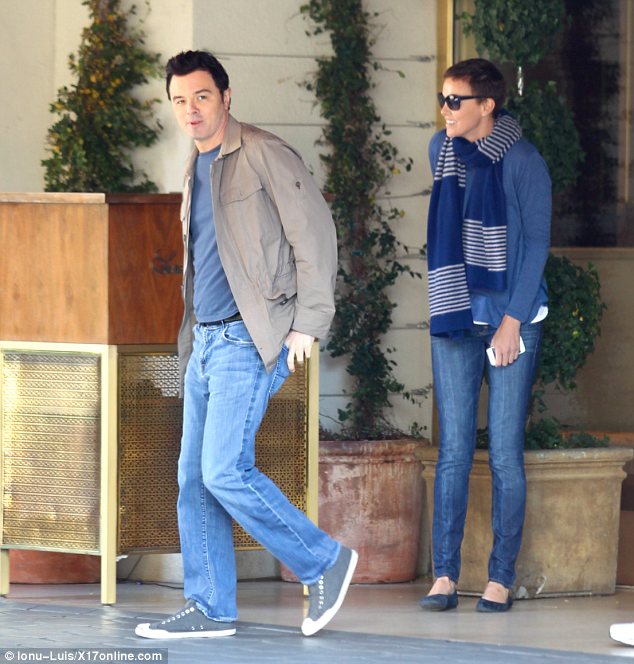 Host: Seth will be master of ceremonies at this year’s Academy Awards where the South African born actress’s film Snow White and the Huntsman has been nominated for Best Costume Design 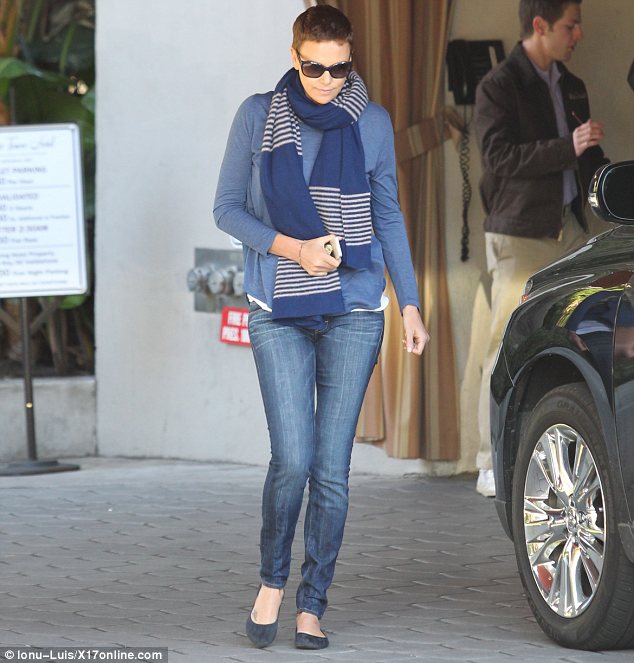 Star in stripes: Charlize went for a more laid back outfit in the afternoon wearing a thick scarf over a blue jumper and jeans
– UK Daily Mail