#YNaija2017Review: Lai Mohammed’s ‘garbage’ about jollof rice, the rat-ification of Buhari’s office… See the 8 most embarrassing moments of 2017 We must say that political office holders are good at going off the cliff, making themselves and those concerned look foolish or confused in the process.

Some events, comments and actions in 2017 blew so many people’s eyes open.

What caused this? President Buhari had been out of the country for months – a great part of the first half of 2017 and a quiz went thus:

Rather surprising is that the anchor added: “stay tuned to get the correct answer”. Chai!!!

The Economist telling Buhari not to return

This is another foreign news site but, this time this news site – The Economist – did a proper analysis of the economic situation of the nation since President Buhari assumed power in 2015 and ultimately said:

“Nigeria’s best chance of reform in the short run, then, is probably for the President to rest up in London a while longer” so, “Nigeria’s technocratic Vice-President, Yemi Osinbajo can push through a proper devaluation”.

The article adds, “Mr Osinbajo has proved an energetic antidote to his ponderous boss…”

As much as we want to commend Osinbajo for his doggedness while his boss was away, we would also ask the President to put his face on his palm, in shame, that his deputy had to be rated better than him.

The most controversial U.S. President in history, Donald Trump has tasted some of it from his wife, Melania Trump. We must say, she has indeed shaded the President in the most public of ways.

In the swat, seen around the world, Melania refused to hold hands with her husband as they arrived Tel Aviv for the President’s first international trip.

.@realDonaldTrump and Melania have landed in Tel Aviv. POTUS goes to hold her hand – she slaps it away! So, tell us how you really feel! 😂 pic.twitter.com/b0dfQSxDcx

But that was not the last.

As Trump arrived Rome ahead of a meeting with Pope Francis, Melania refused to take his hands. He helped himself by holding her backside.

"Still not touching you" – Melania pic.twitter.com/bx9kZmdPwW

A Minister in the President Buhari-led administration was most likely tired of the ‘happenings’ around her and, ahead of the 2019 Presidential elections, she made it known that former Vice President, Atiku Abubakar is her godfather.

Actually, she visited him and was obviously supporting his 2019 ambition.

How the APC and President Buhari resolved the effects of the outburst is mysterious, considering she herself said she would support Atiku even if Buhari contests in 2019, saying Buhari promised not to contest in 2019.

However, she said her loyalty to Buhari is unwavering.

Lai Mohammed and his ‘garbage’ about jollof rice

There was an ongoing social media banter between Nigerians and Ghanaians on whose Jollof rice was world class; a fight that led to attack on personalities but what did Nigeria’s Minister of Information, Lai Mohammed do?

He went to say that the best jollof rice is made in Senegal.

Where that came from we can’t say but, the Minister said this to CNN’s Richard Quest during his visit to Lagos.

For Dino Melaye, it was Ajekun Iya at Nottinghill carnival

Our dear Senator from Kogi West Senatorial District, the handbag of Senator Bukola Saraki and an unsigned artiste famous for his “Ajekun Iya” single of 2017 received more than a dose of his own medicine while he made a failed attempt on image laundering at the Nottinghill carnival in London.

He had mounted the stage at the Lagos corner to praise the Lagos government but the crowd wasn’t having any of that… he was booed all through his speech, while reeiving the middle finger.

The self-acclaimed most popular Senator in the 8th Senate took a chill pill by disembarking from the stage.

The rat-ification of Buhari’s office

The Aso Rock drama of 2017 is enough to shoot a blockbuster movie.

None of this drama could be more embarrassing other than “rodents” in Mr. President’s office. After a long stay away from duty in the year 2017 treating an unknown ailment, your MCM, Muhammadu Buhari returned to the country but he didn’t return to his Aso Villa office.

As expected, the “wailing wailers” on social media queried Buhari’s absence from his office. Apparently running out of “propaganda”, Mallam Garba Shehu, produced a very lame excuse – rats had infested the president’s office.

The “three idiots” of Aso Villa

The trio of  Lauretta Onochie, Garba Shehu, Femi Adesina are the Nigerian versions of Aamir Khan, Kareena Kapoor, R. Madhavan, famous for their role in the blockbuster Bollywood movie, 3 idiots. Through their actions, they have been a disservice to the presidency and have further helped in denting Buhari’s fragile image.

However, on academic analysis, the Indian idiots turned out to be miles better. 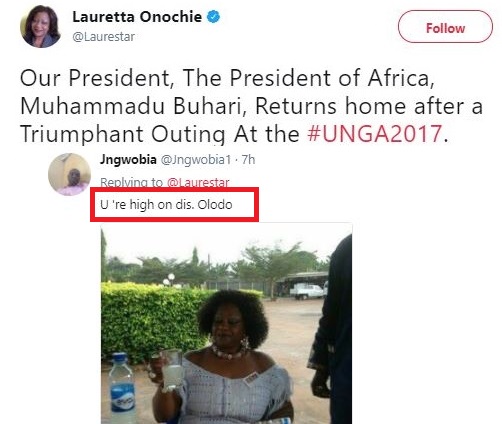 If you think that of Lauretta is not damaging enough what will you make of the statement made by Femi Adesina after receiving a call from his London “king” on his medical vacation?

Without asking him, he told us Baba called him and thanked him for holding down against mischief makers. You say what? You mean Nigerians not comfortable with Buhari are mischief makers? Femi Adesina was dragged from Lagos to Adamawa afterwards.

To the last idiot in the Villa, an ‘Atiku man’ in Buhari’s office.

Even before his erstwhile principal left the AAll Progressives Congress (APC) Shehu’s statements have been harmful to Buhari’s interest. At a time Nigerians were held spellbound by the “other room” comment made by President Buhari thousands of miles away, Shehu in defending Buhari said it was just a joke.. what joke? But Buhari never took that as a joke as he repeated the statement in a subsequent interview with Deutsche Welle. Garba Shehu will enjoy his L for the time being.