Allen Ogedengbe: Why Alamieyesiegha is lying about oil production in Nigeria [GRAPHS]

The infamous Nazi propagandist, Goebbels said: If you repeat a lie often enough, it becomes the truth. This seems to be the case regarding the above urban legend and the issue of Nigeria’s oil production.

There have been different reasons and theories on why the Nigerian president pardoned Alamieyeseigha (by coincidence, he was the presiden’s benefactor). To be clear, it was well within President Goodluck’s power to grant pardon – the morality/ethics of the pardon is for others to explore. The supposed reasons for the pardon are many and conflicting, depending on which end of the political spectrum one leans towards: the President’s supporters vs. Children of Anger .

For the purpose of our discussion, I will rehash a few of these reasonings:

But in truth Alamieyeseigha since he left prison has been working strenuously and silently to assist the President stabilize the amnesty in the Niger Delta Region. Alamieyeseigha is a foremost leader of the Ijaw Nation, and his political and stabilizing influence in that region have impacted positively on the overall economy of the nation, bringing crude oil exports from the abysmally low level of 700,00 bpd, to over 2.4 million bpd!

The other presidential spokesperson, erstwhile public defender of the common good, Reuben Abati, thinks anyone who criticises the prerogative of mercy exercised by the president on Mr. Alamieyeisegha is a sophisticated ignoramus.

Before I am accused of sophisticated ignorance, and writing my my curses in cursive (Kanye West’s lyrics can’t be wasted!), I would stick with using data in public domain to empirically show that Alams and in fact, the Niger Delta amnesty had nothing to do with the drop and subsequent recovery of crude oil production. The reason for the drop was just plain, old boring Economics at work – Demand & Supply/Oil Price fluctuations.

There are three kinds of lies: lies, damned lies, and statistics

No one is sure who first coined the phrase: “There are three kinds of lies: lies, damned lies, and statistics”. Mark Twain attributes the phrase to Benjamin Disreali, the British Statesman. Most people think Mark Twain originated this phrase. It is a darn good phrase for the subject being discussed so I will use it.

Growing up in the Nigeria in the 80′s and 90′s, there was the oft repeated urban legend about a game of football between Nigeria and India. The Indians walloped the Nigerian team by a rather hefty goal margin of ninety nine (why not a hundred?) to one. The ball kept changing to a lion each time the keeper attempted to catch it. I would think it would take a foolhardy keeper to catch a lion running into his post. Thunder Balogun was able to put one past the Indian goal keeper just before the fat lady sang. He had to contend with a ball that turned into a rock when he gave the ball a hoof using his legendary left leg. The gist was that the Indians relied on black magic, and FIFA banned India from ever competing again. This urban legend has been repeated so often that was believed by a lot gullible young folks like me.

The infamous Nazi propagandist, Goebbels said: If you repeat a lie often enough, it becomes the truth. This seems to be the case regarding the above urban legend and the issue of Nigeria’s oil production. Almost all the National Dailies in Nigeria claim that oil production dropped to below 1 million at some point. This is repeated whenever the issue of Amnesty and vandalism of the oil pipelines come up wiithout referencing any source. The numbers have become etched into some sort of truth in our minds as a result of repetition by the newspapers and official sources.

Okupe most likely drew on these numbers in his statement claiming that oil production was boosted from 700,000 barrels a day to 2.4 million a day.

A cursory look at the chart by the US Energy Information Administration’s would seem to support his claim that there was a big drop in crude oil production. 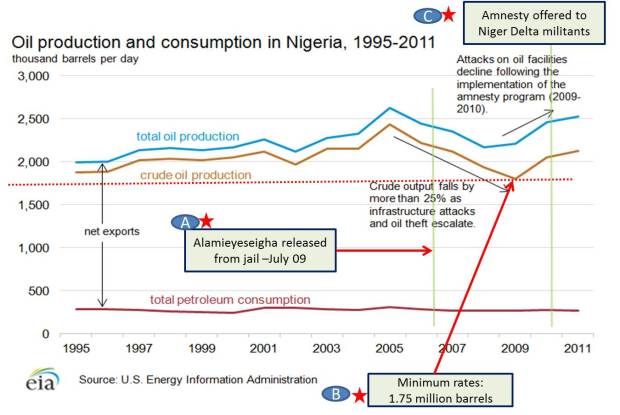 On closer scrutiny of Chart 1, the falsity of the presidential spokesman’s claim quickly becomes obvious. At no point did our oil production drop below 1.5 million. This is supported by other independent sources, including the Nigerian government agency, NNPC.

From Chart 1, at point A on the graph, Alamieyeseigha was released from jail sometime in July 2007 after serving time. This was around the time of increased attacks on oil installations and on oil workers especially expats which affected the oil production in some ways. This however, does not tell the full story of the drop in oil production. The drop in oil production was a combination of factors: the attack on facilities, the recession, oil price and to a lesser OPEC quotas. These factors are issues for another dissertation.

What we are sure of is that the oil production never dropped below 1.5 million bbl/d (point B on graph). This is important because these numbers serve as justification for the ongoing amnesty program which Nigeria has sunk over a billion dollars into with little results. From point C on the chart, the Nigeria’s oil production was already on the upswing (I suspect this is in response to the oil prices picking up) before Amnesty was granted to the militants.

As any half decent production engineer would tell you, it is possible for oil production to drop quite dramatically on a single day for myriad combination of reasons (sabotage, Turn Around Maintenance, weather, human error, spillages). Taking a point sample from a cluster of data can be open to any kind of statistical interpretation. The right way to do this, is to look at the trends and/or the average over a period of time (one month or a year). This was not done, and a convenient production number on a phantom has been chosen to justify the amnesty program.

Like the Indian vs. Nigeria football story, my suggestion is that the crude oil production numbers mentioned by Okupe should be treated as an urban legend which is a cool story but lacking any merit – that is until they show us proof that average oil production rate dropped to sub one million barrels, I won’t count on seeing an official response anytime soon.

Of Correlations and Causes

One statement seen in lots of science and social science write ups which involve data comparison is: “Correlation does not imply causation”. It is a valid warning even if this statement has become something of a cliché.

Given the extraordinarily large amount of data available, it is easy to find a relationship between disparate sets of data. For example, I can theorize that the number of ladies in paid employment in China correlates with an increase in the population of Nigeria. This may technically be true, but there is no reason to believe that the increase in Nigeria’s population led to more ladies being employed in China.

My favourite correlation implying causation has to be this Yoruba proverb, “The witch cried yesterday and the child died today, who does not know that it was the witch that cried yesterday that killed the child who died today”.  In the same way, we have been correlating drop in production and subsequent increase in crude oil production to the activities of the Niger Delta militants, which in reality has hardly dropped (Chart 4).

Explanation for the drop in oil price correlating with drop in oil production is relatively easy. With reduced oil prices, there are little incentives to go after oil which would be expensive to produce. When the oil price plunges below some certain benchmarks, the cost of extracting the oil because higher than the oil price, hence there really is no sense producing the oil. This is usually the cause of drop in production in a lot of countries  Nigeria being no exception. OPEC tries to control the price of oil by allocating quota, this does not seem to work.

Chart 2 below by the International Energy Agency shows the oil production (from 2002 – 2012) from the different OPEC countries: 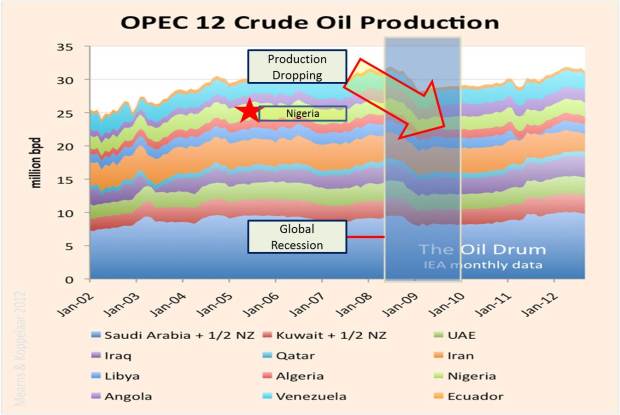 Historically, crude oil production from these countries correlate strongly with the oil price and demands and the recent drop in production is no different. Demand dropped as the recession hit the global economy towards the back end of 2007 (Chart 3) 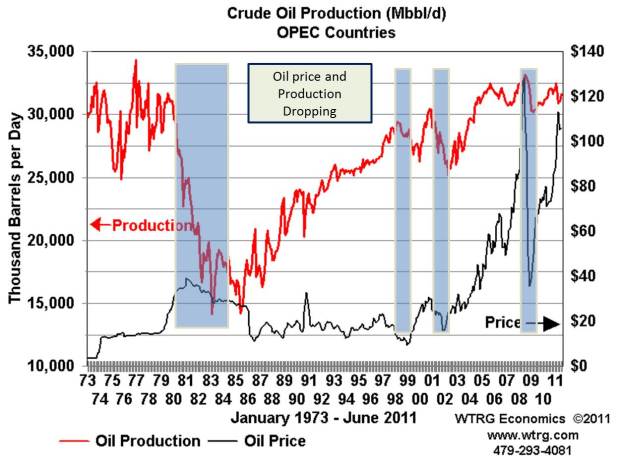 Has the Amnesty Worked?

A total of over 160 billion naira (about $1 billion dollars) – some say 200 billion naira has been spent on the amnesty from 2009 to date. The numbers does not include the contracts awarded to the leaders of the different militant groups in order to pacify them. To put this in perspective, The total budget for 2012 and 2013 for Ekiti State with a population of about 2.4 million was about ₦180 billion.

With all these humongous amount of cash spent, less than 30,ooo militants have been demobbed to date with little change in the vandalism going on in the Niger Delta. 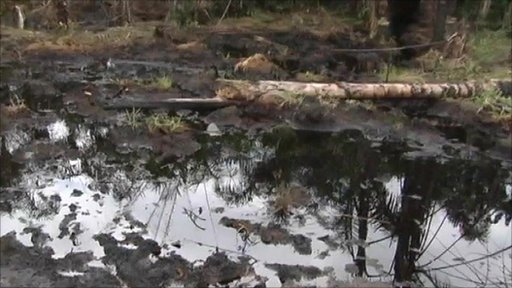 Looking at Chart 4 below, there was an initial drop in pipeline incidents (2009 /2010) and then a rebound in 2011. This has not abated in 2012. Just recently, Eni declared a force majeurebecause of repeated oil pipeline vandalism. A quick google search will reveal that 2012 looks just as bad. (To get a feel, look here, here and here). 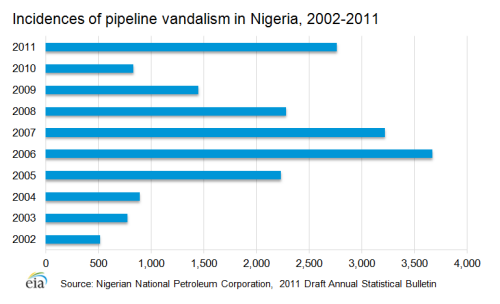 There are no ends to the justification of the amnesty program by the government which is understandable given it is the basis of the billion dollar amnesty project. The amount of crude oil being stolen is as high as ever, between 150,000 and 300,000 barrels if estimates are to be believed. This generates more than $6 billion dollars in revenue to the oil thieves. Much more money than is being given out to a few militants. Little wonder there is no evidence that the amnesty had reduced the thievery going on.

I am not against rehabilitating the militants but it would make sense to evaluate the success of the amnesty program based on proper cost/benefit analysis and not on made up number.

More importantly, there is the need to address the underlying lack of access to infrastructure and social amenities by a vast majority of the oil producing communities. Trying to buy out militants without improving the lives of people in the community by paying ransom in the form of amnesty money would stop attacks on the oil and gas facilities. The process of payment and allocating resources to so called militant is rife with corruption and leakages. There have been instances where the militants were protesting and closed down a major road, Lokoja to Abuja.