A brave aeroplane passenger was forced to take over the controls and make an emergency landing last night after the pilot fell ill.

The hero passenger was helped by two instructors who guided him fly the Cessna into Humberside Airport, in north Lincolnshire, from the ground.

Humberside Police have today said the pilot, who was taken to hospital by ambulance, was pronounced dead last night. 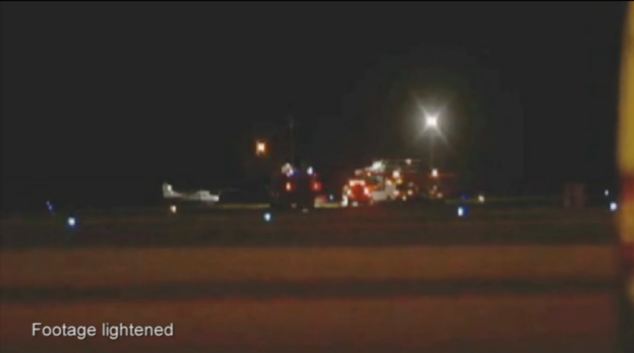 Hero: The passenger took over the controls of the plane and made an emergency landing after the pilot fell ill 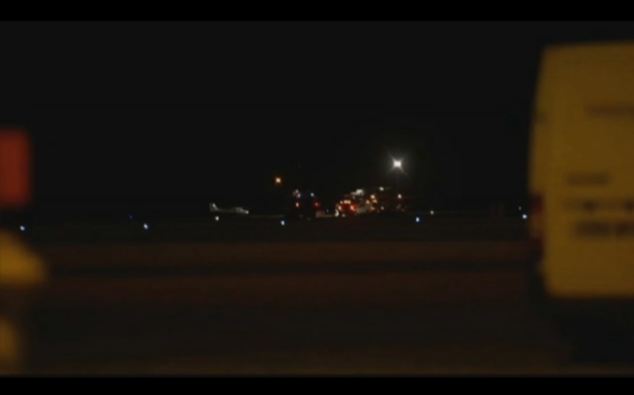 Dramatic: Although the landing was described as ‘heavy’, it was said to be normal 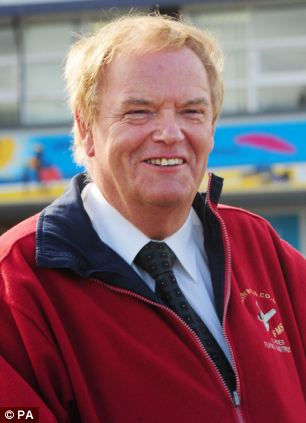 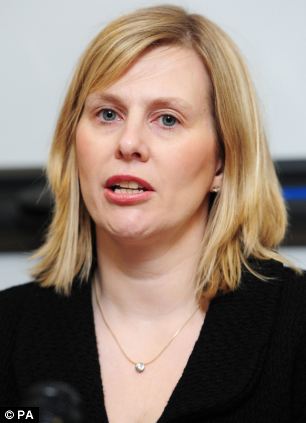 Police are not treating the death as suspicious and formal identification of the pilot was due to take place later today.

Although the landing was described as ‘heavy’, it was said to be normal.

Some witnesses described the plane bumping on the runway and sparks coming off the front of it.

Roy Murray, one of the flight instructors who helped the passenger land the plane, told the BBC the passenger had no flying experience and did a ‘remarkable job’.

Mr Murray said he was surprised just how calm the man he knew only as John was as he brought the aircraft down.

He said the novice flyer did four circuits of the airport before landing at 7.30pm. 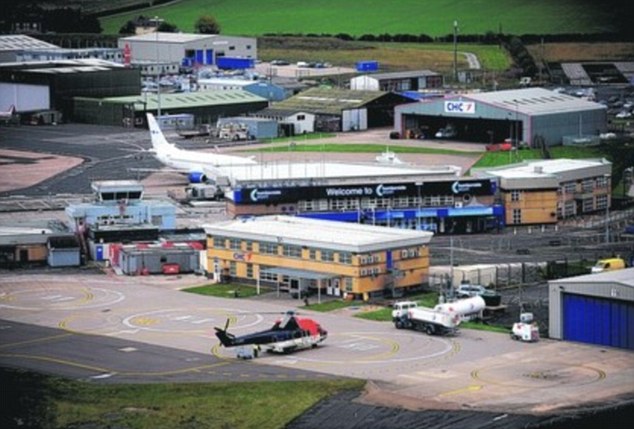 ‘Remarkable job’: The passenger was forced to make an emergency landing at Humberside Airport, north Lincolnshire (pictured), after the pilot was taken ill

‘He did a beautiful landing,’ Mr Murray said. ‘I wouldn’t be frightened to fly with him.’

Mr Murray, who has more than 30 years of flying experience, said: ‘I feel satisfied but sad. It could have been a lot worse.’

Asked how he felt after the landing, he said: ‘Ecstatic. Very relieved but also sad.’

Moments before the pilot fell unconscious, a mayday call was sent and the emergency response was declared on the ground.

According to the Grimsby Telegraph, Mr Murray was at home when he received a call alerting him to the crisis.

The instructor with the Frank Murray Flying School rushed to the airport’s control centre, from where he calmed the passenger over the radio.

He told the newspaper: ‘We started in the radar room to guide him to the airport. It took him four or five attempts to land the plane, as we had to use different runways because of the failing light.’

Stuart Sykes saw the aircraft, which took off at Sandtoft Airfield, near Doncaster, West Yorkshire, land on its third attempt shortly before 8pm.

‘There were a few sparks and three or four crashes, that must have been the propeller hitting the floor. Then it uprighted again and it came to a stop.’

Emergency services gathered at the airport shortly after 6pm yesterday and two incoming flights, from Amsterdam and Aberdeen were delayed while the aircraft landed.

Roads around the airport were also closed by police.

A spokesman for the airport said: ‘An emergency was declared at 6.20pm by the pilot of a two-seater aircraft. ‘Shortly afterwards he was taken ill and became unable to fly it and that responsibility then fell to his passenger.

‘Humberside International Airport put into operation their emergency plan. The passenger flew over the airport a couple of times and then was talked down by two flight instructors and the emergency services were waiting for them when he landed safely.’

The flight instructors have today been praised by David Learmount, operations and safety editor of Flightglobal.com, who said ‘they did really well to get him down’. 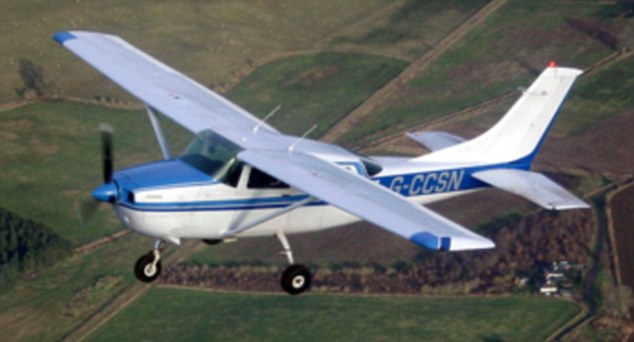 Drama: The aircraft involved in the incident is thought to be a Cessna, like the one pictured (file picture)

Mr Learmount said: ‘A guy with no flying experience would have found flying a light aircraft utterly different from driving a car. In a car, if you don’t like what’s happening you can bring it to a halt.

‘You just can’t do that in an aircraft. You can’t fly slower than 60mph without falling out of the sky. Also, a light aircraft has a much bigger instrument panel than a car.’

Mr Learmount, a pilot himself, said the instructors on the ground would have had to talk the passenger through every step.

‘A guy with no flying experience would have found flying a light aircraft utterly different from driving a car. In a car, if you don’t like what’s happening you can bring it to a halt’

He said: ‘They would have had to direct the guy’s eyes to the instruments. They would have said to him something like: “You see that instrument on the left, can you tell me what it’s reading?”

‘They would have helped him manage the speed of the aircraft and the power. Ideally in these situations, another aircraft gets sent up to fly alongside and then the other pilot can talk the emergency pilot through everything.’

Mr Learmount said he understood that the passenger, attempting to land, had done two ‘go-arounds’ where he pulled out of touching down and pulled away to have another go.

Mr Learmount went on: ‘He might have survived a bad landing but then the aircraft would almost certainly have been wrecked. It’s a very delicate thing. If you don’t pull the nose up before you land then you land very, very hard.

‘The passenger may have been helped by the fact that the pilot, on feeling ill, probably put the aircraft into straight and level flight. You could not have had just any old pilot talking the passenger down. It would have had to be an instructor, because they know exactly what to do in these situations.’

Richard Tomlinson, a friend of both men, confirmed the passenger had never flown a plane before. 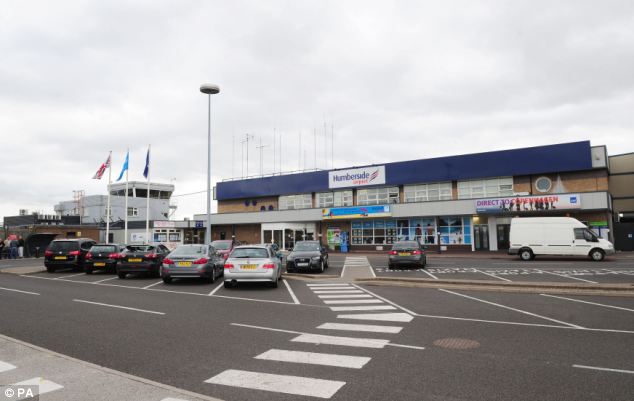 Mayday: Moments before the pilot fell unconscious, a mayday call was sent and the emergency response was declared on the ground. Pictured is Humberside Airport

‘He is a very kind and gentle man who has a passion and interest in aviation but does not actually fly himself,’ Mr Tomlinson said.

‘He has been a pasenger on several occasions and understands the concepts of what goes on but what he has actually done is nothing sort of phenomenal.’

Former RAF Sergeant, Graham Hendricks, 57, who is a frequent flyer from Humberside Airport, described the landing as ‘miraculous.’

Mr Hendricks said: ‘For a chap who hasn’t flown a plane before to put it down in those circumstances is a miracle.

‘It was dark and the passenger must have known his pilot was very seriously ill which would have put him under even more pressure.

‘Humberside is the not the easiest airport to land at for a novice which makes it even more incredible.’