Horror as Chinese boy, 6, has his eyes gouged out after getting kidnapped by organ trafficker

A six-year-old Chinese boy had his eyes gouged out after reportedly being kidnapped by an organ trafficker.

Family members found the youngster covered in blood some three to four hours after he went missing while playing outside his home.

The child’s eyes were found nearby but the corneas were missing, reports said, implying that an organ trafficker was behind the harrowing attack. 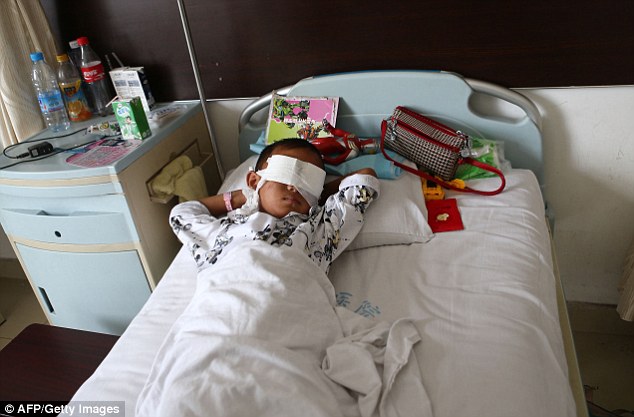 Horrific: A Chinese boy lies in hospital after he had his eyes gouged out reportedly by an organ trafficker 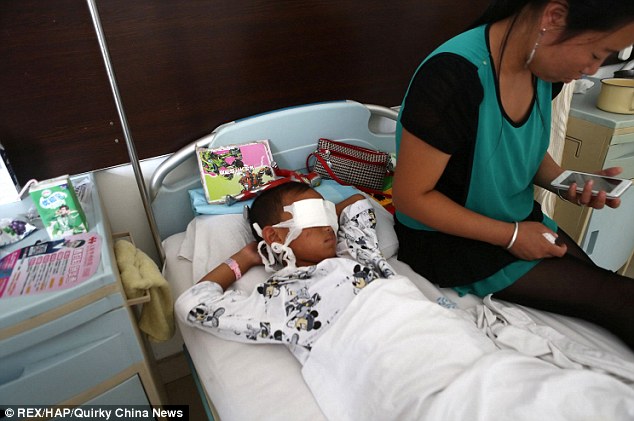 Recovering: The youngster was playing alone outside his home in Linfen, Shanxi Province, when he was allegedly snatched on Monday evening

About 300,000 patients in China need transplants each year, but only about 10,000 people can get them due to a lack of donors, state media said.

Child organs are usually more expensive on the black market, an organ trafficker told Sina Internet news portal in 2010, as ‘most people think the younger the donor is, the better the quality of organs’.

Seven people were jailed last year when a teenager sold a kidney for an illicit transplant operation and used the proceeds to buy an iPhone and iPad.

‘He had blood all over his face. His eyelids were turned inside out. And inside, his eyeballs were not there,’ his father told Shanxi Television.

Its report showed the heavily-bandaged boy being taken from an operating theatre and placed in a hospital bed, writhing in agony as family members stood at his bedside weeping.

The boy was drugged and ‘lost consciousness’ before the attacker removed his eyes, state broadcaster China Central Television (CCTV) said on its account on Sina Weibo, China’s version of Twitter.

Internet users were outraged by the attack on the boy – who had a cleft palate – in Fenxi, in the northern province of Shanxi on Monday. 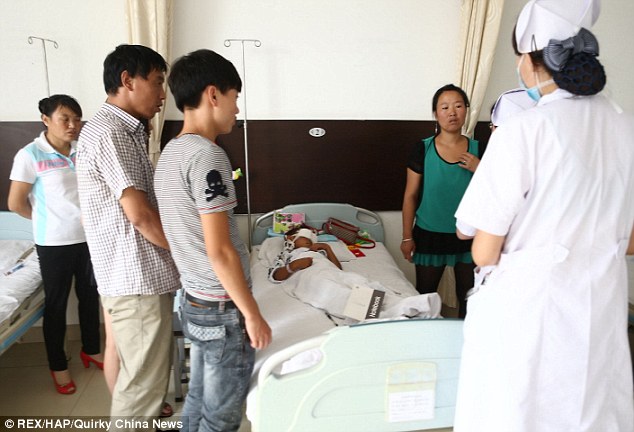 Mortified: Relatives of the youngster talk to a nurse. His parents realised he was missing when they tried to call hm inside the house but received response

‘Extraordinarily vicious’: The child’s eyes were found nearby but the corneas were missing, reports said, implying that an organ trafficker was behind the harrowing attack

WHY DID THEY TAKE THE CORNEAS?

The organ trafficker may have been motivated by money.

But they could also have been driven to such a horrific crime by the hope of saving someone’s sight – or even their own.

Problems with the cornea – the clear front part of the eye – can cause the eye to mist up and, if left untreated, lead to blindness.

But the most serious conditions such as Fuchs’ dystrophy, a degenerative condition that affects older people, can be cured with a transplant, above (file picture).

Until recently, the only operation was a full cornea transplant, an operation that involved 24 stitches in each eye and an 18-month recovery period.

But advances in technology have meant surgeons can now carry out a partial replacement under local anaesthetic with a recovery time of just four weeks.

‘This is extraordinarily vicious,’ said one Sina Weibo user. How and why could someone be so cruel?’

The youngster was playing alone outside his home when he was snatched on Monday evening.

His parents discovered he was missing when they called him inside at around 8pm but received no response.

They began a frantic search with other relatives and eventually found him screaming in a nearby field with blood covering his face around three hours later.

The kidnapper apparently told the boy: ‘Don’t cry. Don’t cry and I won’t gouge out your eyes.’

The boy’s father said: ‘We didn’t notice his eyes were gone when we discovered him.

‘We thought he fell down from high and smashed his face.’

However, once the boy was rushed to hospital doctors discovered that his eyes had been removed.

The illicit organ trade in China has been triggered by the disparity between the 300,000 people on hospital transplant waiting lists and the fact that only 10,000 organ transplant operations are performed each year. 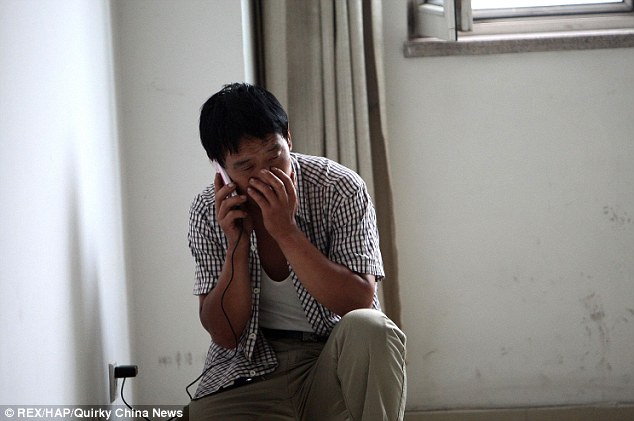 Distraught: The boy’s father found his son screaming in a nearby field with blood covering his face 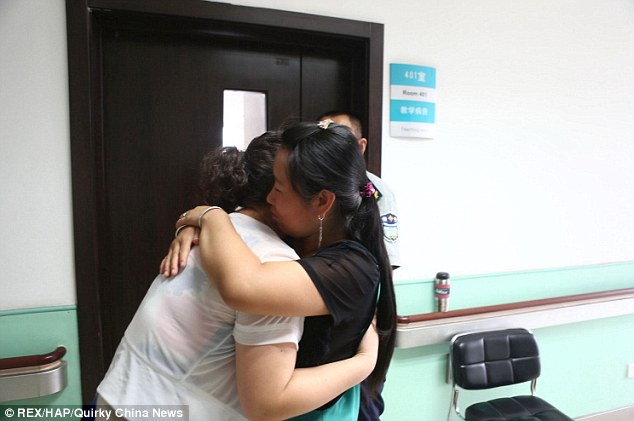 Despair: The boy’s hugs a relative. Few Chinese agree to donate their organs after death, fuelling the rampant illegal activityIn December last year, a Chinese surgeon and six accomplices were jailed for illegal organ trading and intentional injury after a teenager sold them his kidney to buy an iPad and iPhone.

Song Zhongyu performed the back-street operation on the 17-year-old schoolboy, identified only as Wang, who agreed to part with the organ in exchange for gadgets worth around £1,900.

The student’s mother raised the alarm after she became suspicious about where he had got the money for his new gizmos.

He finally admitted to the deal when he began suffering from renal failure, telling how he had met the gang in an online chat room.