He was in a boatload of trouble, and that’s where cops found him.

Dzhokhar Tsarnaev, 19, was discovered in the bottom of a rare, 1980s pleasure boat in the backyard of a Watertown, Mass., home just after 6 p.m. by the shocked owner David Henneberry, his family told the Daily News.

Henneberry, an avid boater who is a member of the Watertown Yacht Club, walked outside to have a cigarette just after Gov. Deval Patrick lifted the curfew on Boston residents at 6 p.m. Friday.

[READ: Like a boss: President Obama being briefed on the capture of terror suspect (SNAPSHOT)]

This still frame from video shows Boston Marathon bombing suspect Dzhokhar Tsarnaev visible through an ambulance after he was captured in Watertown, Mass., Friday, April 19, 2013.

The entire city had been on lockdown all day as cops went on an intense manhunt for Tsarnaev — who’d escaped a massive shootout around 1 a.m. and had been MIA ever since. 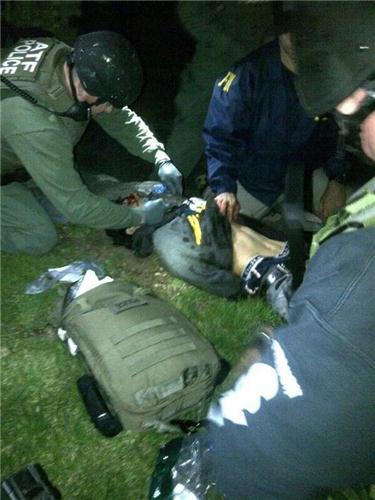 Henneberry was quietly smoking when he noticed the tarp that covered his 22-foot pleasure cruiser — a white Seahawk with blue trim and a fiberglass hull — was askew and walked over to investigate, said his stepson Robert Duffy.

“He went over and saw the tarp was dislodged and then he saw that one of the straps was hanging loose. He picked it up and saw it had been cut. He found it incredibly odd,” said Duffy.

Dave Henneberry discovered alleged terrorist Dzhokhar Tsarnaev hiding out in a boat parked in his driveway in Watertown.

Henneberry got a small ladder, climbed up to reach the boat deck and flipped back his tarp, said Duffy.

“He lifted it up and saw a pool of blood. And then he saw what he thought was a body,” said Duffy.

He jumped off the ladder and ran inside, dialing 911 as he went.

Within minutes, Duffy said, cops descended and moved his stepdad and mother to a neighbor’s house.

His sister was briefly allowed to speak to her mother, who has been ill, so the family would know they were all right, Duffy said.

“Cops have been interviewing them ever since,” he said.

He said his stepdad thought the person in his boat was still alive despite spotting blood pooling under the tarp.

Apparently shots were exchanged at some point when police moved in, Duffy said.