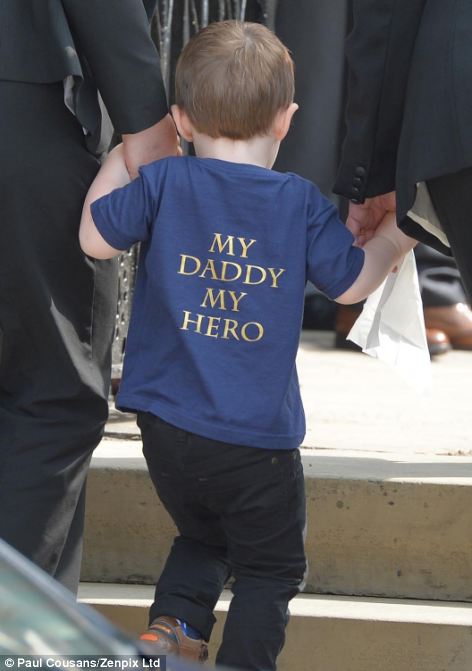 The son of Fusilier Lee Rigby arrived at his father’s funeral today wearing a t-shirt that said: ‘My Daddy, My Hero’.

Jack, Rigby two, arrived at the funeral wearing a blue t shirt with ‘My Daddy’s A Fusilier. Lee Rigby’ printed on the front.

He was joined by hundreds of mourners at the service for the 25-year-old, who was hacked to death outside Woolwich barracks in east London on May 22.

More than 1,000 people lined the streets to pay their respects to the soldier brutally killed in broad daylight.

Members of the public applauded Fusilier Rigby’s comrades and forces veterans as they arrived for the funeral service at Bury Parish Church, where comrades had maintained a guard of honour overnight.

Applause also greeted the father’s heartbroken loved ones, who joined about 800 mourners inside for the private service just a couple of miles from his home town of Middleton, Greater Manchester.

Members of the Royal Regiment of Fusiliers held a two-minute silence to honour the soldier, whose death shocked the nation.

Prime Minister David Cameron, who told the Commons earlier this week that the whole of the UK will be mourning with the family, was among dignitories attending the service. He arrived with the Mayor of London, Boris Johnson, to a ripple of applause.

Fusilier Rigby, a drummer in the 2nd Battalion Royal Regiment of Fusiliers (2RRF), was killed as he returned to Woolwich barracks from the Tower of London on May 22.

He had served in Afghanistan as a machine gunner and was attached to the regimental recruiting team when he was murdered in daylight on a street in south London.

The horrific killing led to nationwide shock and revulsion, and led to an outpouring of support for his family from the public.

Serving soldiers, forces veterans and ordinary members lined the streets outside Bury Parish Church where a guard of honour kept a vigil overnight over their comrade’s coffin inside the church.

The service began with a hymn and a reading by Sean Sheer, one of Lee’s fellow soldiers and a family friend, bringing laughter from mourners.

He spoke about how they had become friends, and how Lee had adored being a father.

Mr Sheer said he first met Fusilier Rigby when he was posted to the Fusiliers in 2008 and found him the ‘most annoying, campest man I have ever met’, citing his singing and love of boyband Westlife as the reason.

‘Everywhere Lee went, Jack went with him,’ he said.

‘Lee’s time on this earth was tragically cut short’ but he was a ‘loving father and devoted husband’.