“Nasty assault”: Man is jailed after having affair with his father’s girlfriend, and then beating up his father

A son who had sex with his father’s new girlfriend has been jailed after beating him up when he was confronted about the affair.

Nigel Davies, 54, hit his son Thomas, 24, with a knuckle duster after discovering he had been sleeping with his partner Karen Keen, 36.

The younger man overpowered Mr Davies Snr and grabbed him by the throat before repeatedly punching him on New Year’s Eve in Newcastle-under-Lyme, Staffordshire. 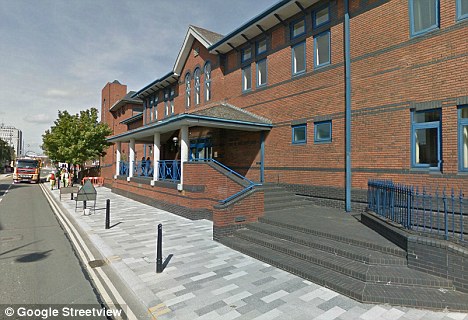 Jailed: Thomas Davies, 24, who slept with his father’s girlfriend, was given 10 months behind bars when he appeared before Stoke Crown Court

The court heard the fight started when Nigel overheard mother-of-five Keen telling a friend she had also slept with Davies Jnr.

The older man responded by grabbing the knuckle duster to attack his son and partner but it was wrestled away from him.

Prosecutor David Bennett told the court Mr Davies attacked his son and knocked him back into the chair.

But his son got up and Keen also became involved and started hitting him.

Mr Bennett said: ‘Mr Davies senior grappled with his son on the sofa.

‘His son pinned him down and punched him with both hands. He was also struck by Keen. At one stage, Davies junior had his father round the throat.’

Nigel Davies was left with cuts above his eyebrows, two black eyes, loosened teeth and bruising to his cheek. Thomas Davies told police he had been having an affair with Keen.

He also admitted he had punched and headbutted his father because he had ‘mouthed off’ about him.

‘Great new year locked up when done sweet fa apart stop people fighting which let them get on with it story got twisted now i am on bail f***** d**** so happy new year (sic).’

Davies, of Newcastle-under-Lyme, pleaded guilty to the charge on the basis he initially acted in self-defence but the level of force became unreasonable.

He was on bail at the time for another assault, for which he received a community order in February.

Keen, of Longton, Staffordshire, also pleaded guilty to assault – which placed her in breach of a suspended prison sentence she received in 2011 for stabbing a former partner with a knife.

Judge David Fletcher handed her a 12-month community order with supervision and 32 sessions at a centre which aims to help women get their lives back on track.

He told them: ‘This was a nasty assault, to some extent the victim started it.

‘Nevertheless, I can think of very few more provocative reasons for him becoming a little bit angry.’

Paul Cliff, representing both defendants, said all parties had consumed alcohol and Nigel Davies reacted angrily when his son admitted sleeping with Keen.

He said: ‘The defendant initially acted in self-defence, Miss Keen accepts at some point she struck the complainant.