#NelsonMandela: First photos from the memorial service in honour of Madiba

Tens of thousands of people together with world leaders are currently gathered at the FNB stadium in Johannesburg, South Africa at the memorial service for the late legend, anti-apartheid icon and former South Africa president, Nelson Mandela. The service is currently being showed live at three “overflow” stadiums. Some photos below: 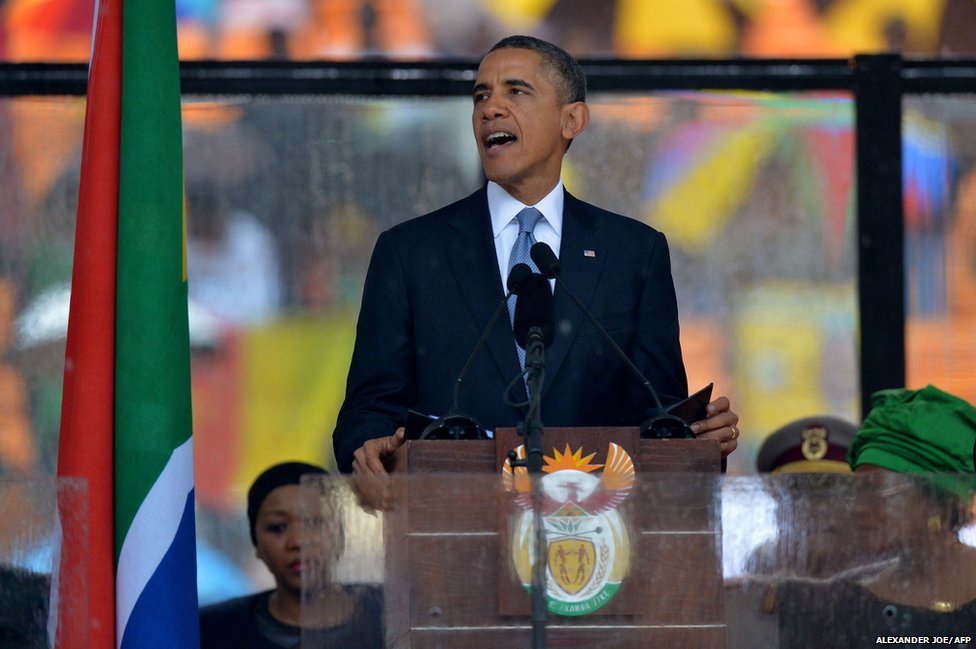 US President Barack Obama is welcomed by a huge cheer from the crowd as he begins his speech, in which he describes Mr Mandela as a “giant of history”, adding: “The world thanks you for sharing Nelson Mandela with us.” 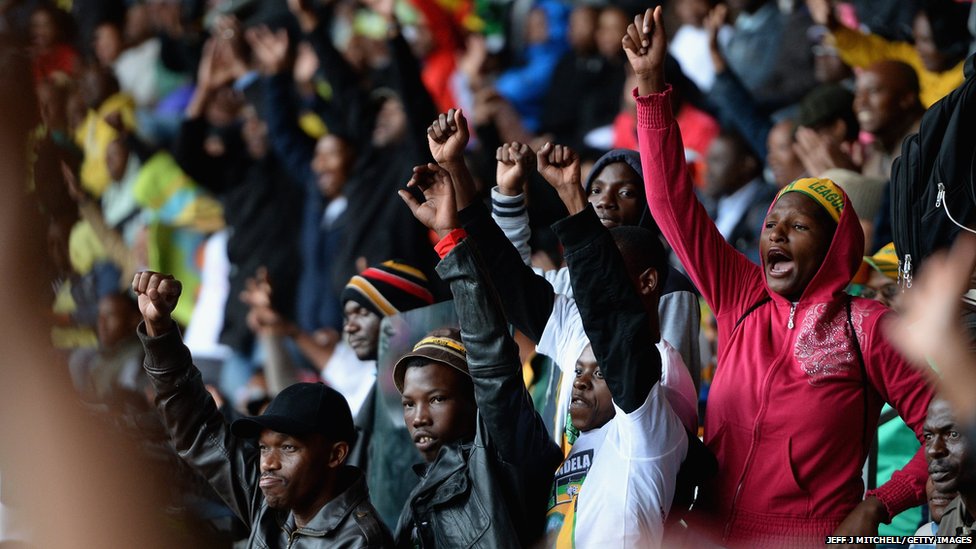 John Simpson, the BBC’s World Affairs Editor said: “Despite the difficulties – the driving rain and logistical challenges – of organising this event, it must remain a source of immense pride for South Africans that a memorial for one of their own has attracted such an array of world dignitaries.” 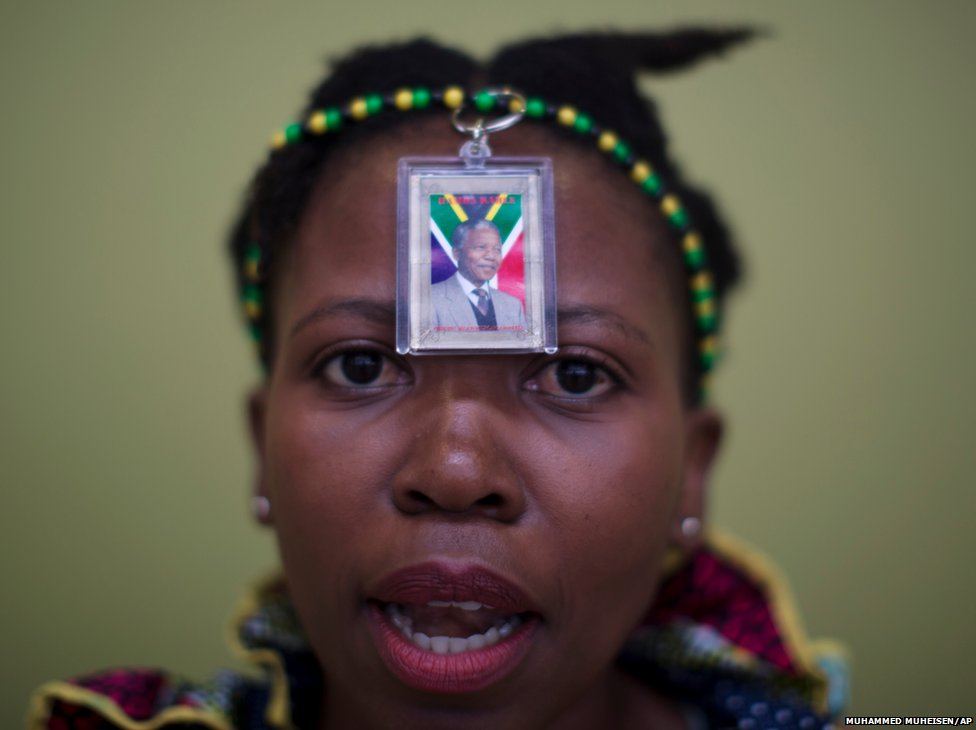 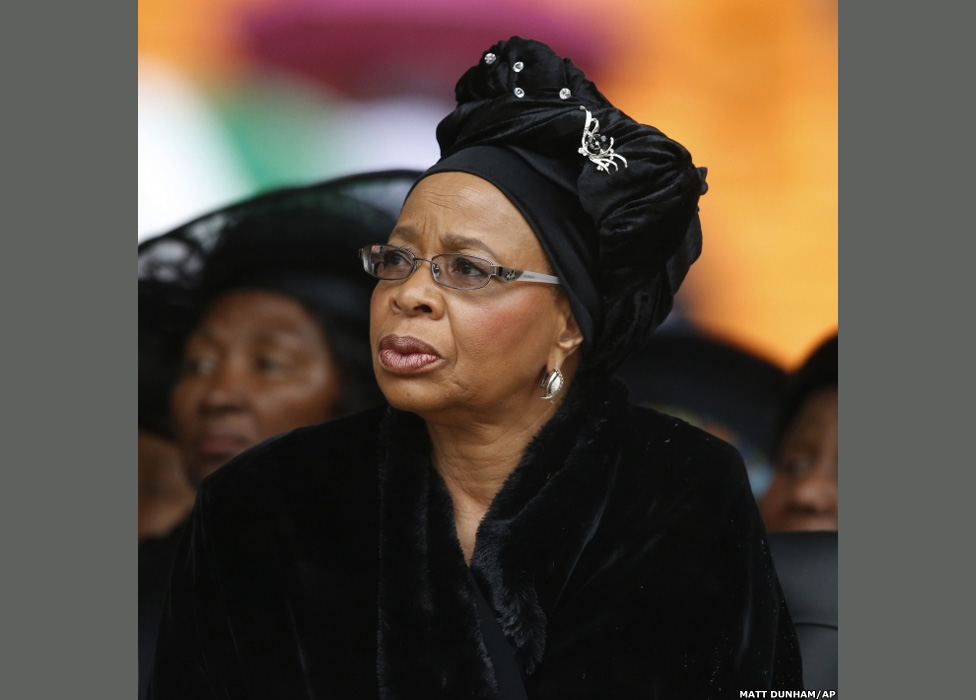 Nelson Mandela’s widow Graca Machel listens to the tributes including that by UN Secretary General Ban Ki-moon who said: “Mandela hated hatred. Not the people. He showed wholesome power of forgiveness. A unique gift.” 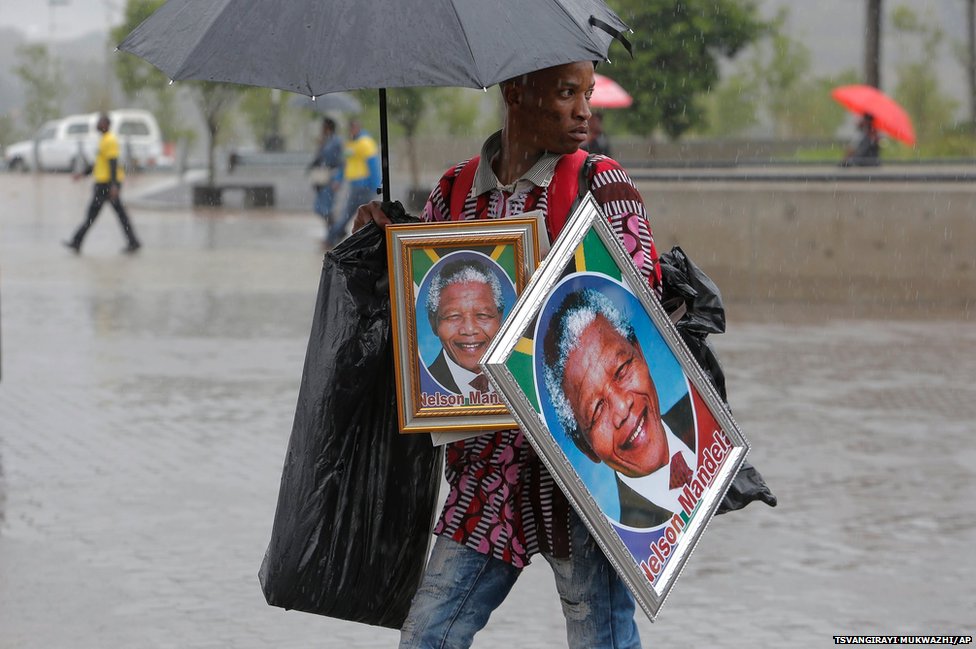 Outside the stadium a man prepares to sell portraits of Mr Mandela. 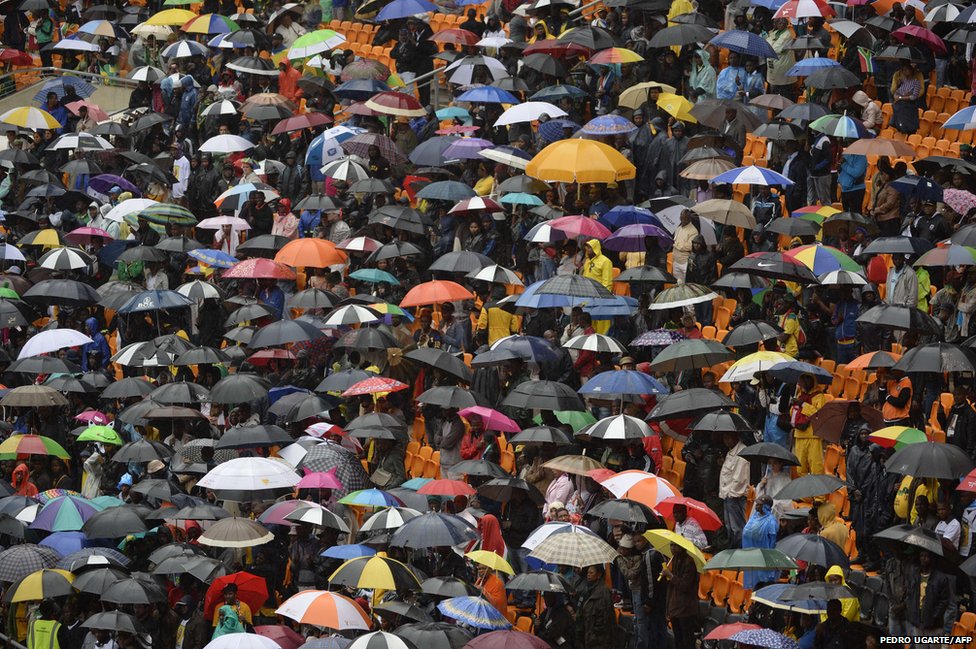 The heavy rain continued as deputy president of the ANC Cyril Ramaphosa addresses the crowd and welcomes those in the stadium and those watching around South Africa and around the world. He said: “In our tradition, when it rains when you are buried, your gods are welcoming you to heaven.” 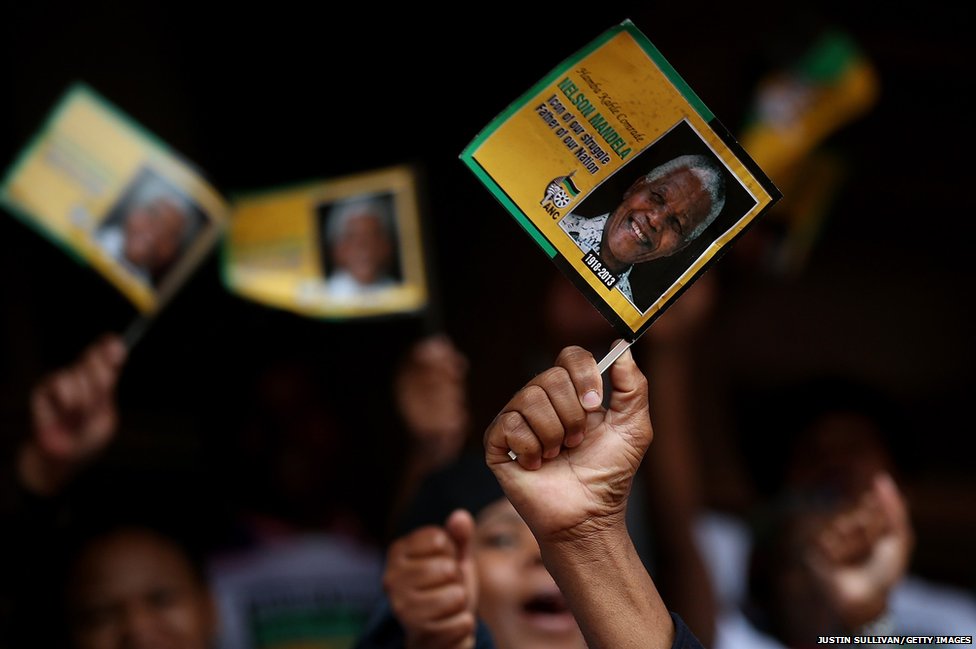 Flags and banners are waved as the memorial gets underway just over an hour late. 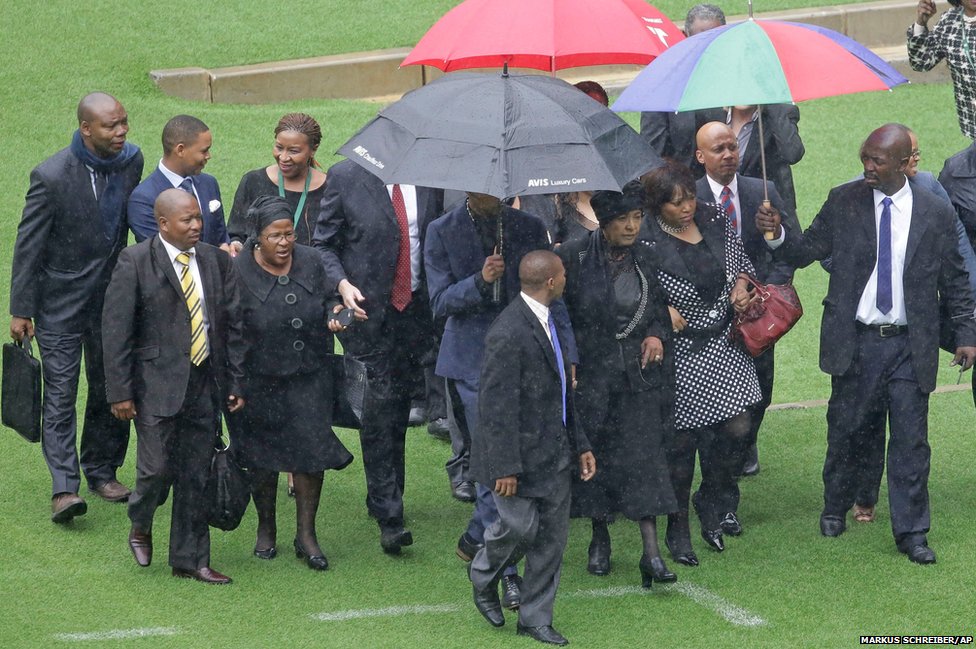 There were cheers of “Winnie! Winnie!” for ex-wife Winnie Madikizela-Mandela as she makes her way to her seat inside the stadium. 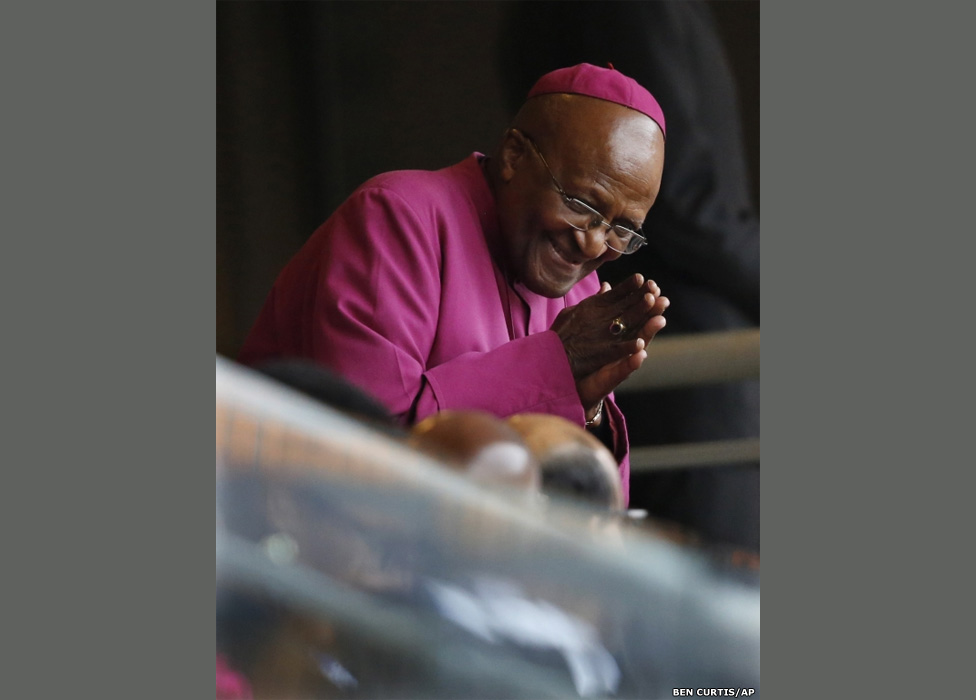 South Africa’s Archbishop Emeritus Desmond Tutu, a leading figure in the struggle against apartheid earlier said of Mandela: “He was a unifier from the moment he walked out of prison. We are relieved that his suffering is over, but our relief is drowned by our grief.” 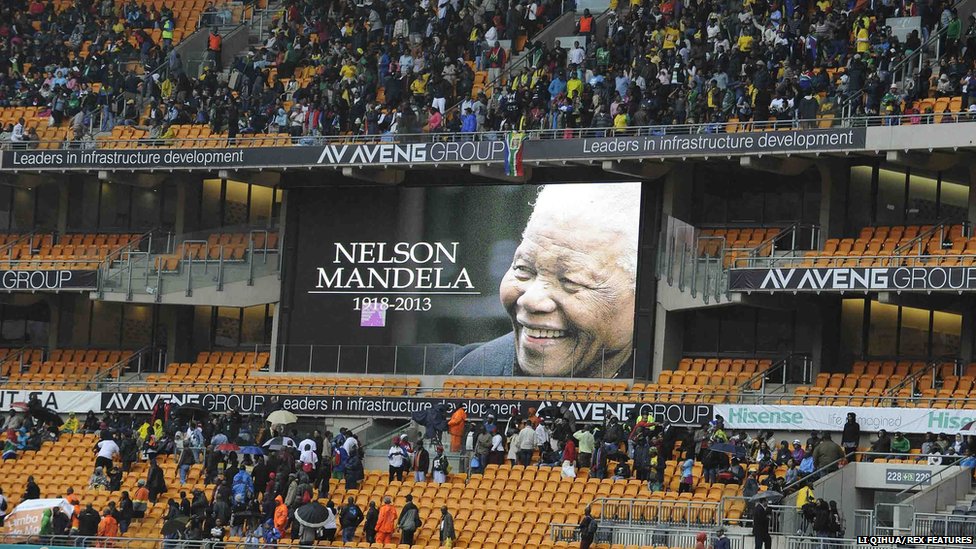 Since Mandela’s death, Johannesburg has been blanketed in unseasonal cloud and rain but despite this the atmosphere inside the stadium is one of joy and celebration. 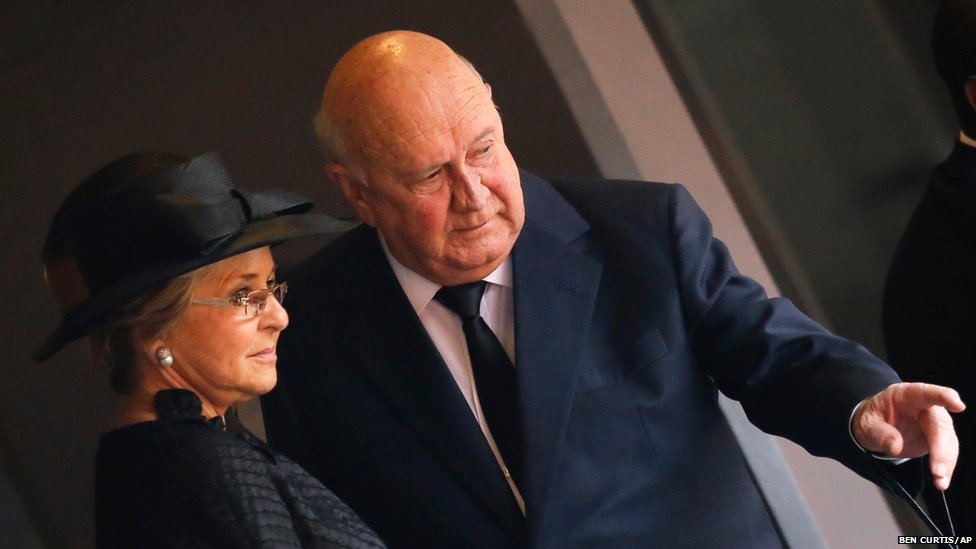 As the time for the ceremony to start draws near some of the dignitaries arrive, including South Africa’s last white president FW De Klerk with his wife Elita. 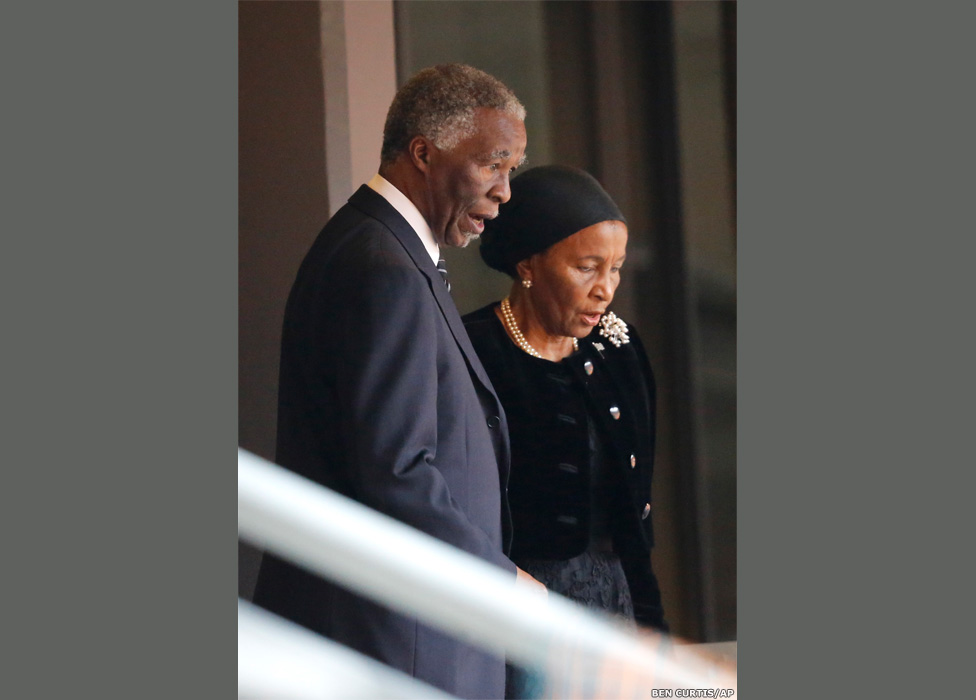 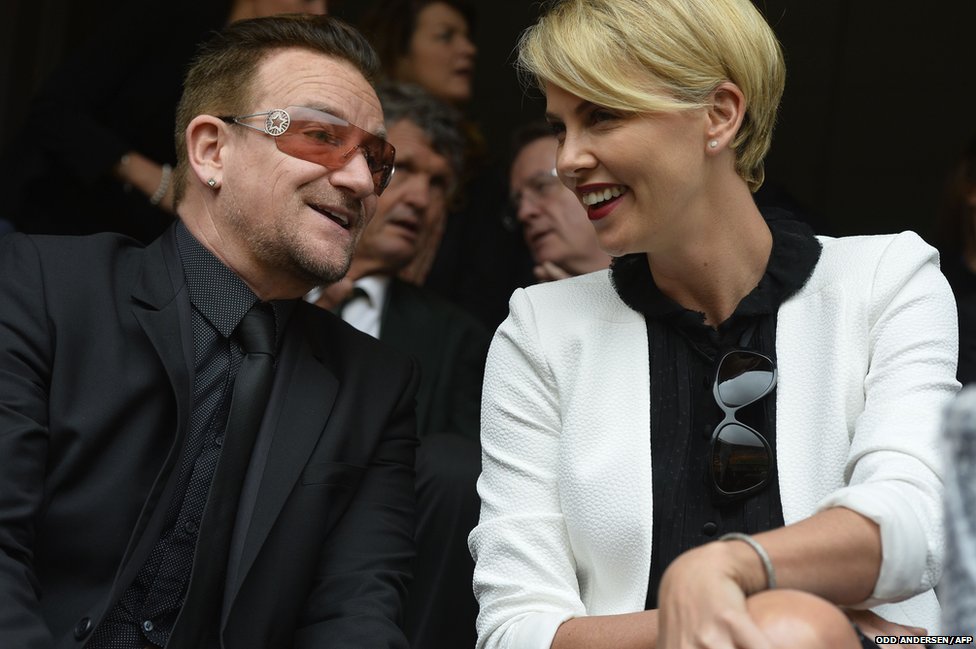 Alongside the politicians a number of figures from the world of entertainment are attending the ceremony, including U2’s lead singer Bono and South African actress Charlize Theron. 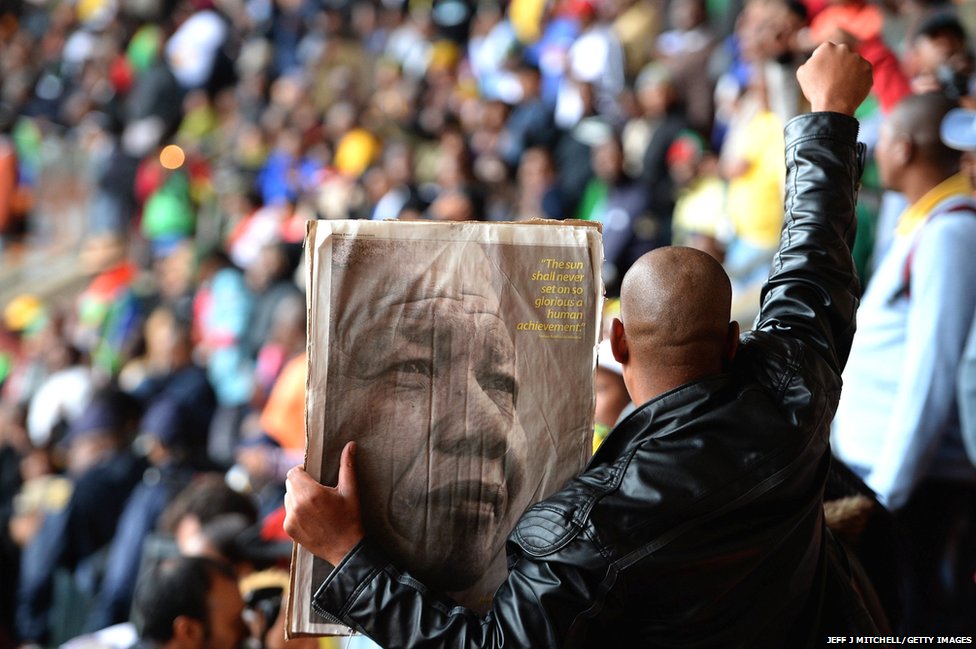 The former South African president died aged 95 last Thursday and the country is observing a series of commemorations leading up to the funeral on Sunday. 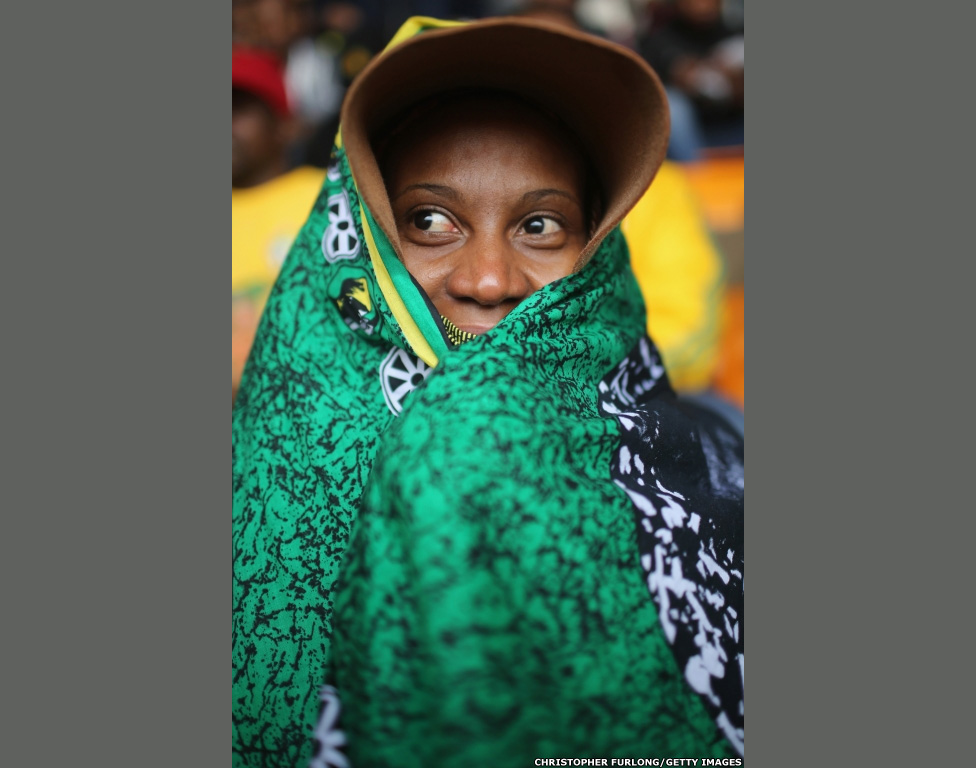 The BBC’s Clive Myrie is outside the stadium and said: “A trickle of people are still arriving on buses, but the stadium is still only half full – it is torrential rain out here and I’m sure that it is affecting the number of people arriving. The “spillover” areas are said to be empty.” 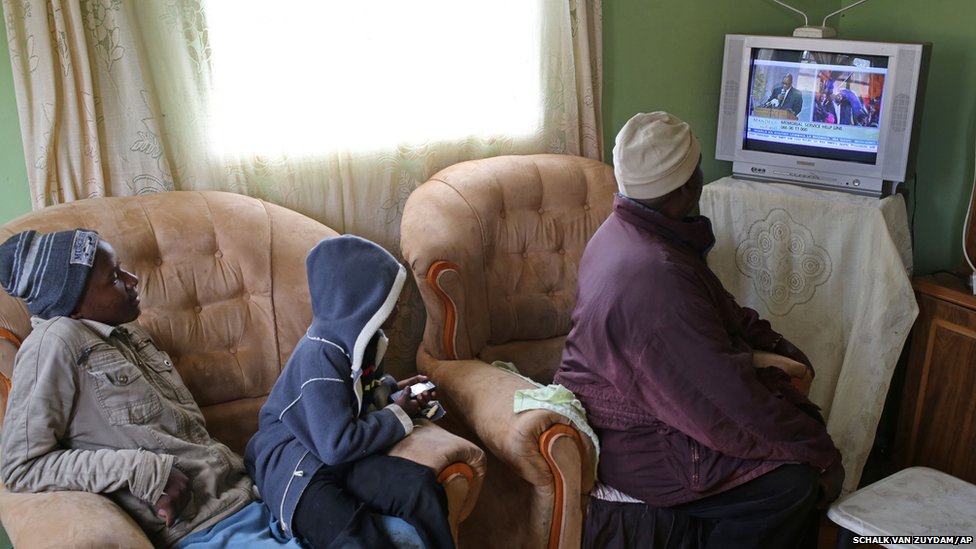 The ceremony is being broadcast across the world, with many in South Africa tuning in. 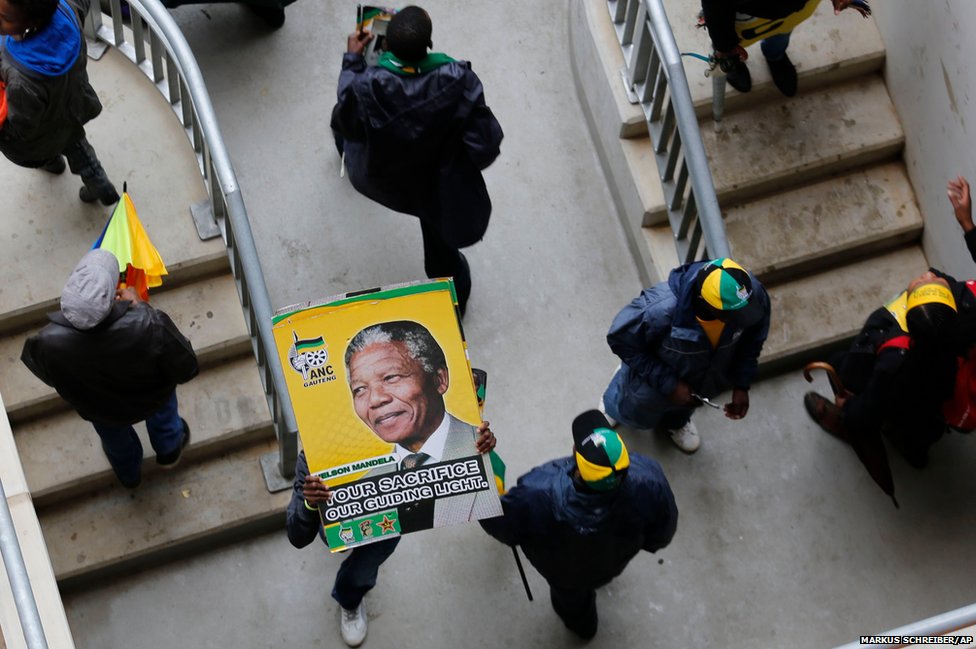 The memorial service is expected to last four hours. 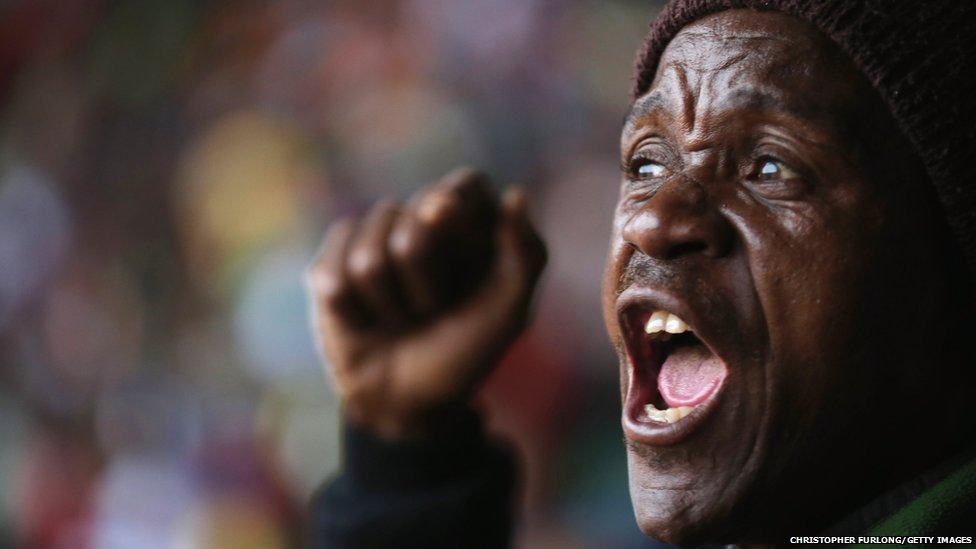 The service is being seen as a celebration of the life of Nelson Mandela with the crowd singing and chanting as they arrive inside the stadium. 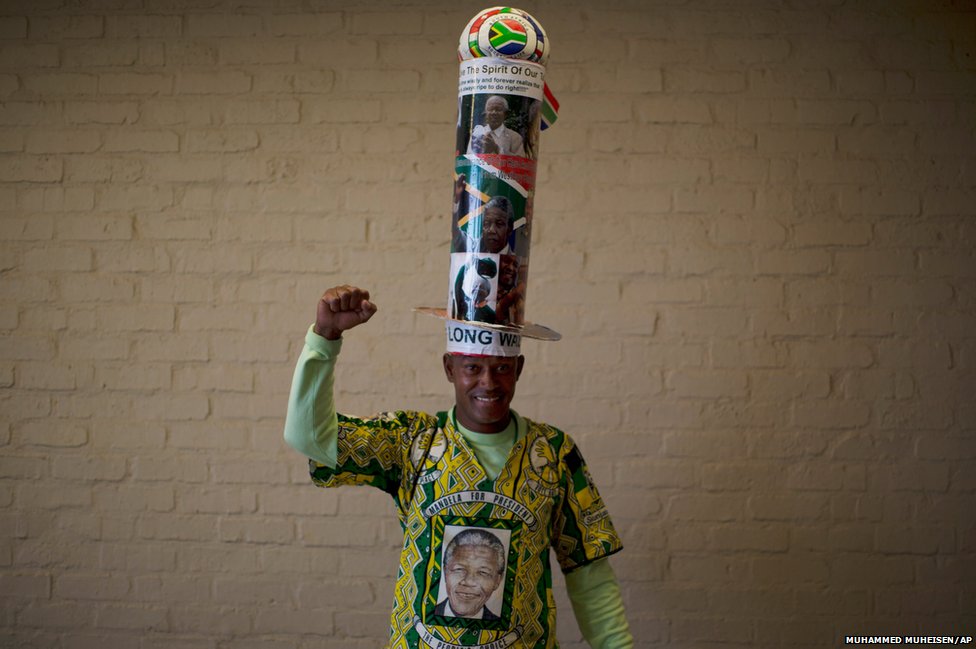 A mourner poses with his home-made hat as he arrives at the stadium. 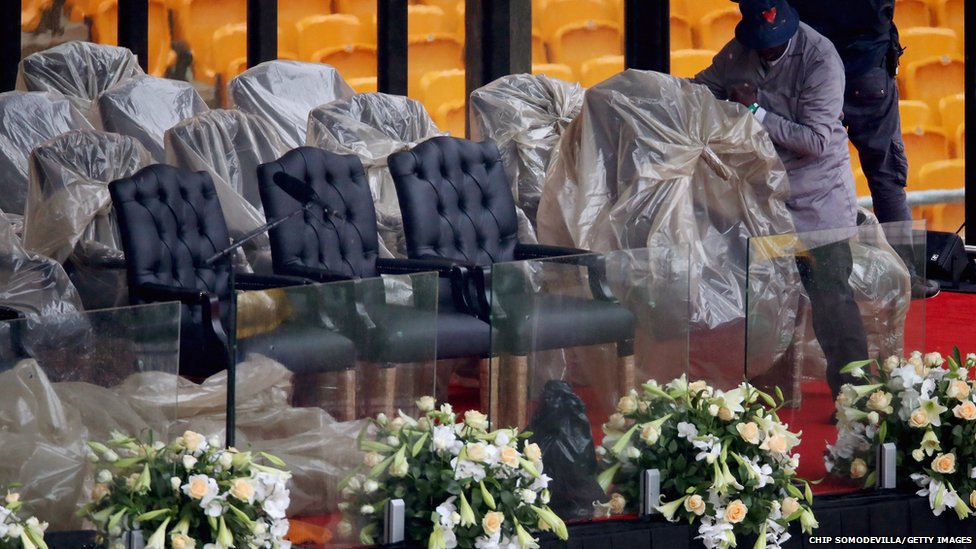 Plastic sheeting is removed from chairs on the main stage. More than 90 current heads of state or government are expected to attend. 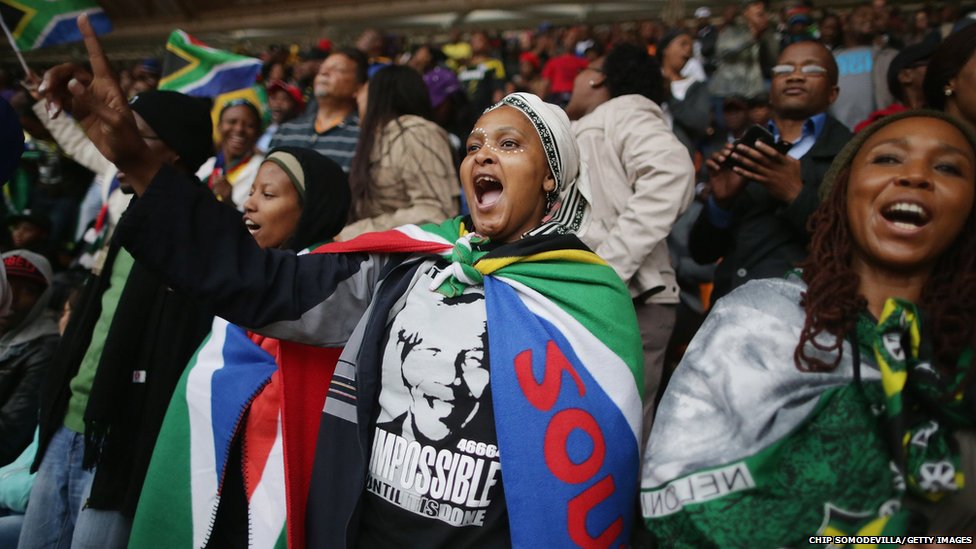 The crowds are in high spirits – singing and dancing and stomping their feet. 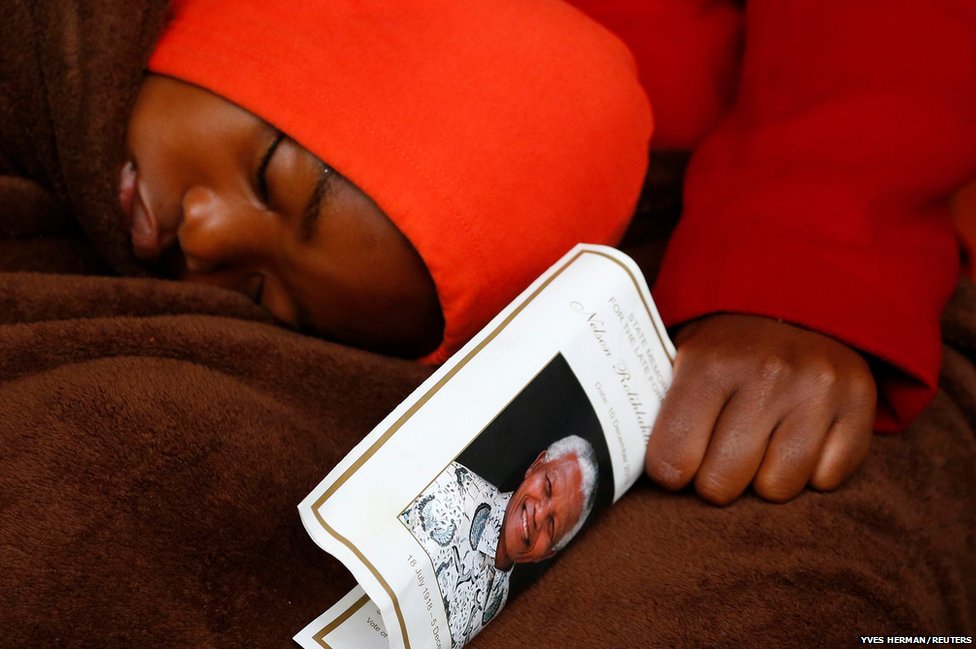 For some the long wait is too much. 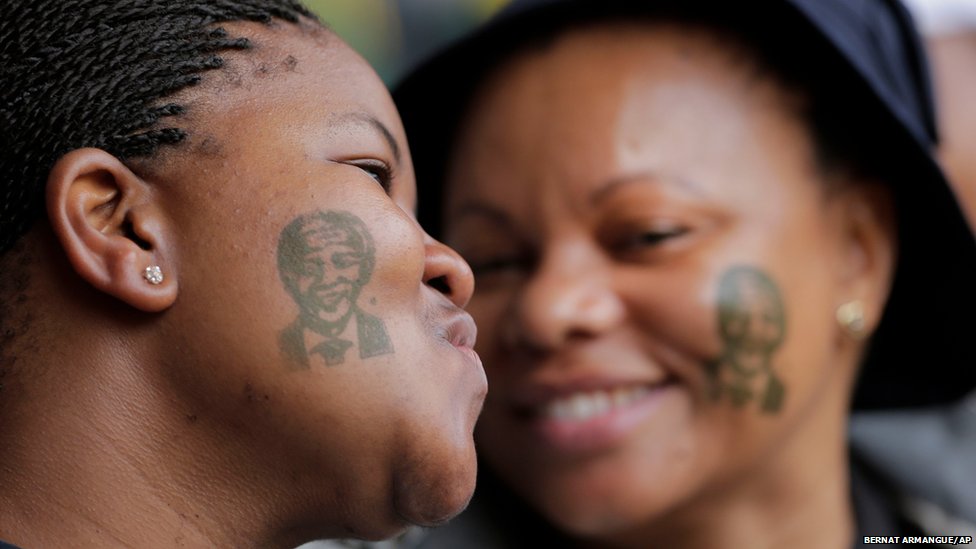 Pictures of Mandela are everywhere, on banners, flags and even tattoos. 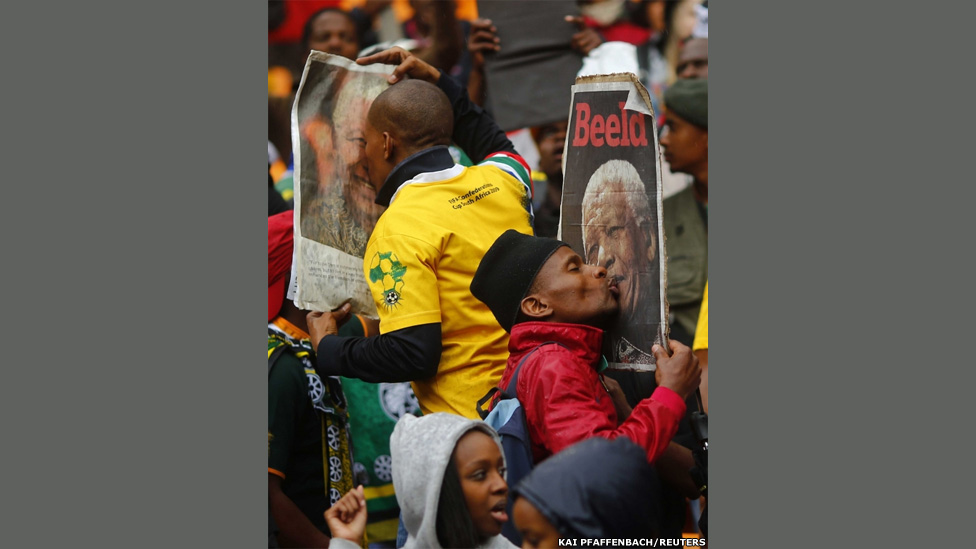 The BBC’s Pumza Fihlani reported that hundreds had formed queues outside by 05:00 eager to get one of the 95,000 seats. 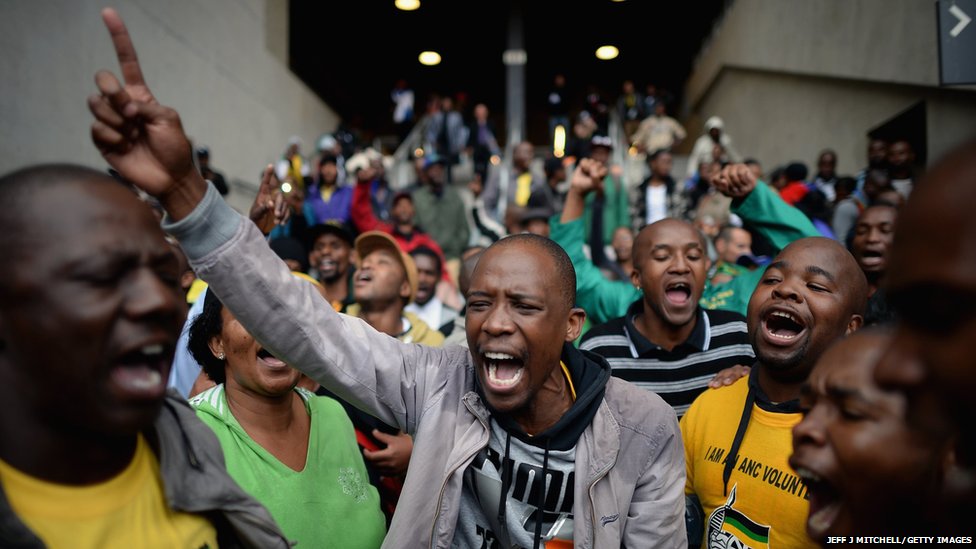 The country is observing a series of commemorations leading up to the funeral on Sunday. 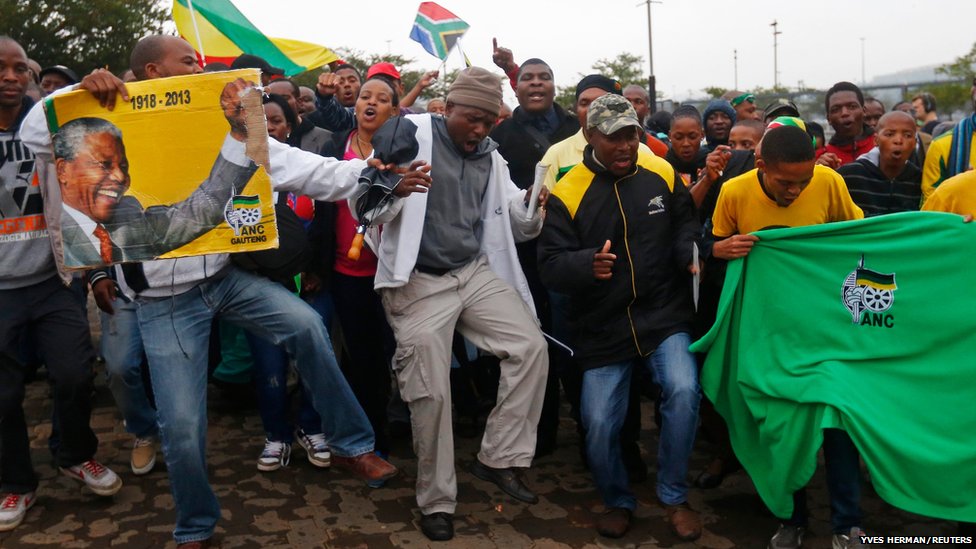