Rob Kardashian and Blac Chyna aside, Kendall and Kylie Jenner are in serious trouble too Rob Kardashian and Blac Chyna‘s relationship is arguably the hottest topic in the world right now but it’s probably not for the best for either of them. The Kardashian had a major meltdown on social media yesterday, posting nasty pictures and accusing his baby mama, Blac Chyna, of serially cheating on him. It took Instagram’s shutting of his account down for the people on that platform to be spared the dirty laundry; but the troubled Rob would not be deterred, he took his mess to Twitter.

It’s however not only Rob Kardashian from the reality star blended family that has waded into troubled waters unhinged. Last week, his step sisters Kylie and Kendall Jenner contributed their own fair share of controversy when they launched tees from their “Rap vs Rock” line which were characterised with their faces superimposed over famous musicians’. They must have thought they were Rihanna who dared to superimpose the Queen‘s head on her scantily clad body in a number of her Instagram post weeks ago.

The musicians Kendall and Kylie dared to disrespect are not even the new generation hip-hop types, they went straight for the stars, the legends – Ozzy Osbourne, the Doors, Notorious B.I.G., and Tupac (how dare them! Tupac Shakur?).

The shirts were as distasteful as you can imagine but that did not stop K and K from selling each one for the outrageous sum of $125 (most likely minus shipping). Maybe it was bad skunk or maybe it was misguided motivation from their sister, Kim‘s $14 million-20-minutes KKW Beauty launch.

Of course, the internet outrage machine kicked in and they had to pull down the products from their site and apologise.

Now, indie rockers, Arcade Fire have taken a step that must feel like insult on injury for the girls. They are releasing shirts with a design from their Everything Now project, placed over an image of Kendall Jenner’s face. She’s after all, the older one although they did not say why they chose only Kendall as scapegoat.

It might as well be her, she’s the one who has gone head on into two other such controversies this year alone – first for agreeing to cover Vogue India’s anniversary edition wearing traditionally inspired items from the sub-continent when there are several Indian models that could have been used. Then of course, headlining the failed and inappropriate Pepsi ad.

Arcade Fire seemed to understand what they were doing to Kendall Jenner, tweeting a picture of the super model with a fidget spinner, a new rave item that has been publicised as an anxiety reliever. 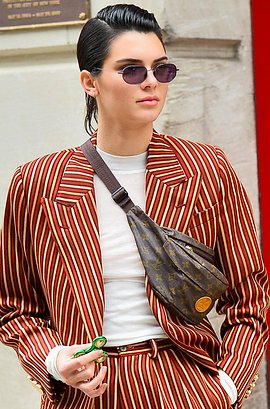 But it’s not all jokes on social media. Sharon Osbourne, the supermom has taken it seriously. Same as Notorious B.I.G.’s mother  Violetta Wallace , while the Doors are reportedly, already planning to sue the girls.