A Congolese soldier has admitted raping 53 women including children as young as five as he and his comrades ransacked a town during the brutal civil war.

The soldier was one of thousands who descended on Minova, near Lake Kivu in the Democratic Republic of Congo, and spent two days raping, looting and killing before officers regained control. 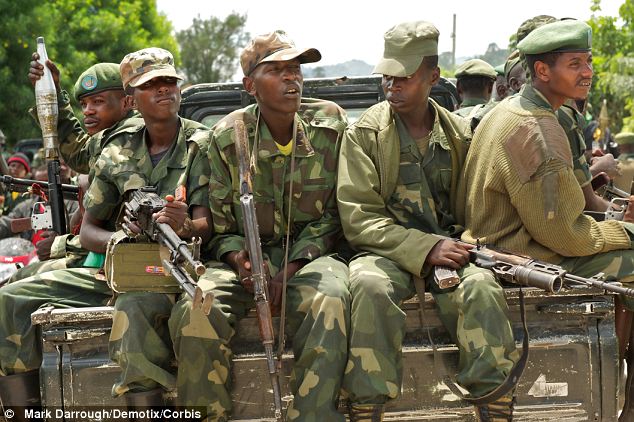 Civil war: Soldiers of the DRC army in Minova last November. One has admitted raping 53 women as he and comrades rampaged through the town. There is no suggestion that any of these soldiers were involved

The 22-year-old soldier, speaking near where he committed his crimes, told The Guardian how he and two dozen of his comrades gathered and decided to rape ten women each before carrying out the atrocities.

He and his fellow soldiers just lost a battle with rebel M23 fighters in nearby Goma. Regimental structures had disintegrated and they were embarrassed, angry and out of control.

They arrived in Minova drunk, hungry and violent, and subjected the town to a two-day bloody nightmare before the army managed to restore discipline.

One doctor said his hospital had treated more than 100 women for injuries caused by rape.

However, the soldier who spoke out about his crimes said he and his comrades didn’t commit their crimes for anger, but for pleasure.

‘We could do anything we wanted,’ he said. 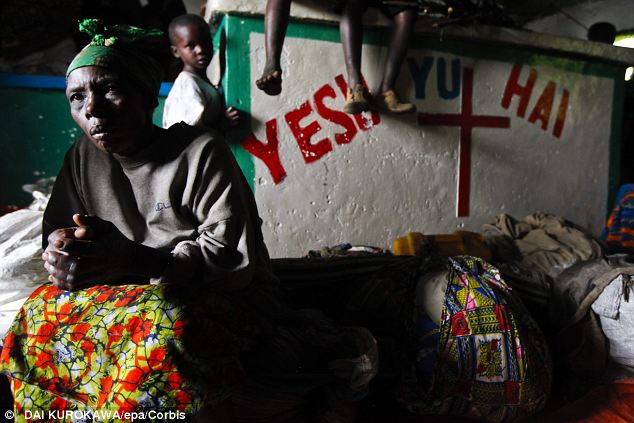 Misery: Residents of the area around Minova seek sanctuary from the fighting in a church. Soldiers from DRC’s army subjected the town to a two-day nightmare of looting, rapes and murders 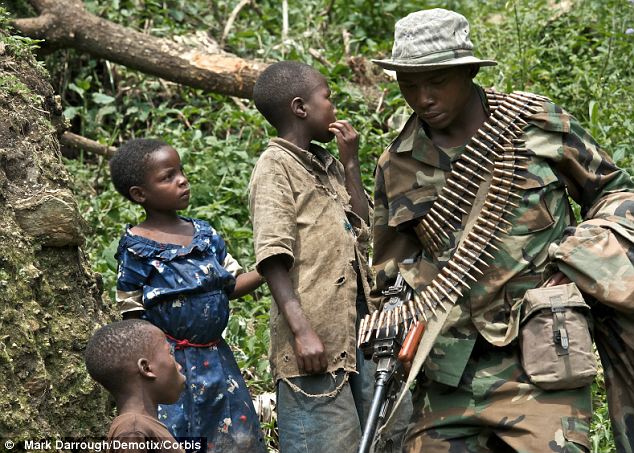 An M23 fighter with local children: The soldiers had just lost a battle with fighters from the M23 rebel group. Regimental structures had disintegrated and they arrived in Minova drunk, hungry and violent

The revelations will add a fresh urgency to efforts by the G8 group of developed nations to fight sex attacks in war zones, which has been backed by Hollywood star Angelina Jolie.

Jolie, who is a special envoy for the UN Human Rights Council, joined Mr Hague at a meeting of the G8 foreign ministers in London yesterday afternoon as the Foreign Secretary announced the UK’s £10million commitment.

The UK’s pledge will make up part of an overall £23million package pledged by the G8 nations. 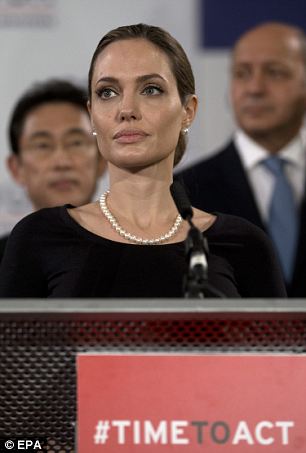 #timetoact: Angelina Jolie talking in London yesterday at the launch of a new initiative to stamp out war rape to which the UK pledged £10million

Mr Hague said some funding will go toward training military personnel on how to respond to sexual violence, since they are often the first to encounter survivors.

But in the case highlighted by the Guardian today, it was the DRC’s own soldiers who were guilty of horrendous sexual crimes when they launched their frenzied attack on Minova on November 22 last year.

Many of their victims have had to turn to rape refuge centres as – since rejected by their families and husbands – they have nowhere else left to go.

Speaking from one refuge, Nzigire Chibalonza, 60, said she was first beaten severely by soldiers who turned up at her shop, before three of them raped her.

‘Now my husband mocks me,’ she said. ‘He calls me the wife of a soldier. He has rejected me.’

The Congolese army says it is taking action to deal with the rapists in its ranks. If the victims are unable to identify their attackers, prosecutors have threatened to arrest the officers who failed to control their troops.

The UN says that the DRC has suspended a dozen senior officers and is interrogating suspects and observers hope that successful prosecutions might make Minova a watershed moment in tackling war rape in Congo.

But there have been few concrete developments and the women of the town remain sceptical.

‘They may arrest some, but then later they will just set them free again,’ the head of the rape refuge centre said.