‘They pay recruits up to N500,000’: How Boko Haram enlists Niger gang members for terror attacks in Nigeria (PHOTOS) The British Broadcasting Cooperation (BBC) has uncovered a gang of teenage recruits enlisted by the dreaded Islamic militant group, Boko Haram in carrying out terror attacks.

The recruits who are chosen from several countries including Niger, Cameroon and Chad are said to be paid up to half a million naira depending on how successful their attacks are.

According to the BBC reports, the degree of success of attacks perpetrated in Nigeria is determined by the number of casualties recorded.

Read the Vanguard account of the BBC documentary below:

The teens, when they are enlisted, are given Tramol [an opiate drug], marijuana and alcohol. They break into houses for cash; sometimes beat people for money, and steal their animals for food. They gather again for their opium and drinks.

Though the recruits, barely in their teens, do not like the sect and its activities, they said they took to violence as being students they have no jobs and are poor. 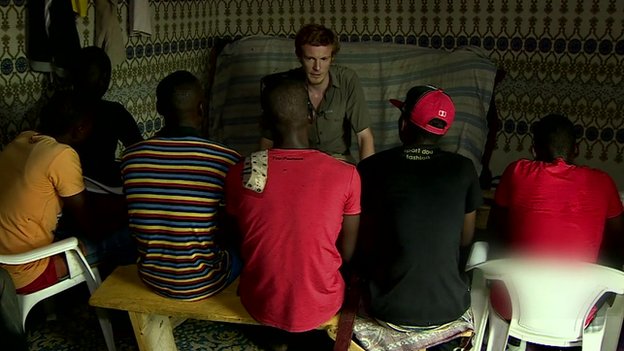 In their hangout, the gang explained their association with the sect. “They have paid 500,000 Nigerian naira ($3,085, £1,835) to those of us who followed them over there. The rest of us, here, we give them information. When they come, we inform them about what’s going on, what the security forces are up to. If they tell you to set off a bomb and it succeeds, if it kills a lot of people, they will pay you a lot of money,”one of the young men said.

Five members of this gang in Diffa, near the border, have joined the group; two have since been killed on operations, he said.

But the ideals for which Boko Haram is fighting – the imposition of strict Sharia, an Islamist caliphate and the banning of Western education – hold no interest for the gang, the report continued.

One of the gang members said, “Boko Haram Islamist militants from Nigeria regularly come across the border, looking for recruits. We can’t contact them, they come to us.”

The documentary showed about a dozen gang members in a tiny, dark room, built with local mud-bricks in the town, with a couple of home made stools and weights for them to exercise just outside the door.

Already, Nigeria’s neighbouring countries – Niger, Cameroon and Chad – are fearful that the group’s insurgency may spill over to their borders.

The Diffa government believes that the emergency rule in place in north-eastern states of Nigeria has not changed anything over the last year.

“It has radicalised Boko Haram more than anything else and generated other gangs and groups of bandits,” one official said.

Asked if they agree with Boko Haram’s reason for fighting, the gang answered in unison: “No. We only do it for the money.”

The boys who do not share the Boko Haram ideology of opposing anything western, were reportedly in skinny jeans, bright coloured T-shirts and shiny chains – like those seen around the necks of American rappers on music videos.

“Their attitude and brand new clothes make them stand out when they walk down the dusty streets of Diffa. The fashion style is clearly inspired by Western consumerism rather than Islamist militancy,” the report said.

“The gang members agreed to talk to us on the condition that we would not reveal their identity.

“We break into houses for cash; sometimes we beat people for money, we steal their animals so we can eat and then we gather up and take Tramol [an opiate drug], smoke ganja [marijuana] and drink alcohol,” one said.

“We have no jobs; some of us are still at high school but we need money. Violence has become a form of work for us.” 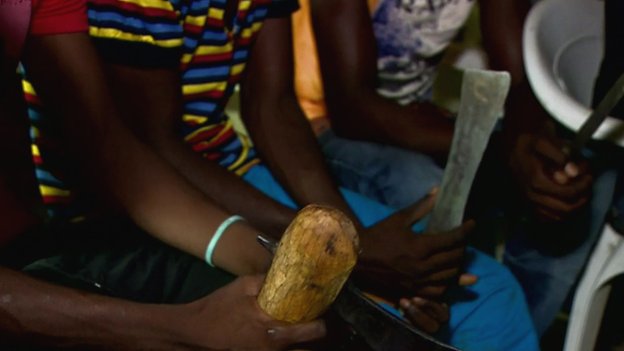 The young gang members also showed BBC a stash of machetes, knives, knuckle-dusters and traditional axes. They also claimed to have firearms and grenades but refused to show them.

Boko Haram has also been attacking the Niger region, an official told the BBC, adding that several attacks allegedly planned by the sect on the country’s territory have been foiled over the last months; and dozens of men suspected to have links to the group have been arrested.

Niger’s customs and national guards patrol along the porous border every day but the report said the Nigerian soldiers are yet to join the joint border patrols with their counterparts from Niger. The trading post of Krikri is seeing many Nigerians arrive seeking safety adding that some have relatives on the other side of the border.

“We know that Boko Haram members come across the border, but we are watching them closely,” Diffa government representative Inoussa Saouna, says.

“Just last December, we arrested two dozens of men – we believe they were planning to kidnap the regional governor, the military zone commander and myself.”

“On paper, the border is supposed to be secured by joint patrols with soldiers from both countries. However, they have yet to start.

“Niger’s security forces are receiving training, logistics and intelligence support from both the US and France. Most of the border between Niger and Nigeria is naturally drawn by the Komadougou Yobe River.

Niger has a growing refugee crisis but without camps, which the authorities are reluctant to allow, fearing they could become new targets, or worse, recruitment centres for Boko Haram.