Just when the buzz, American singer Madonna’s epic fall at the 2015 BRITS awards was gradually dying down, pop culture critic, Piers Morgan, decided to wade into it and oh my, was he harsh!

In his recent article on UK’s DailyMail, Piers described Madonna’s fall as a sign that the music legend is too old to act as a hooker on any stage.

Although he praised the singer for giving him one of his greatest moments in entertainment, while still in her late 20s, he threw a swing at her for being a ‘bad’ mother and her absurd dating choices, jumping from one boy toy to another.

Madonna falls and the world gasps… in laughter.

Let’s be honest, most of us howled ourselves hoarse watching the self-acclaimed Material Girl morph into Material Hurl at the BRIT Awards, Britain’s answer to the Grammys.

For me, it perfectly personified the state of this once great legend’s career: dying on her a** in a pit of ignominy.

I don’t say that with any glee. I say it as someone who used to worship the ground she gyrated on.

I watched Madonna perform at London’s Wembley Stadium in 1987 with a great friend of mine. We were both 22, she’d just turned 29.

We got there early, and drank beer throughout the sun-drenched afternoon, then fell asleep at the back of the stadium only to wake up 20 minutes before show time to find 70,000 people in front of us.

Leave it to me,’ I told my mate, and I immediately started marching forward, hands waving, shouting ‘SECURITY, MAKE WAY PLEASE!’

It worked beautifully, the masses parted, and before we knew it, we were right down the front.

The concert, part of her Who’s That Girl tour, was sensational – genuinely one of the best I’ve ever seen.]

She sang 16 smash hits, starting with ‘Open Your Heart’ and ‘Lucky Star’, storming through ‘Papa Don’t Preach’, ‘Material Girl’ and ‘Like A Virgin’ then climaxing with ‘Into The Groove’, ‘La Isla Bonita’, ‘Who’s That Girl’ and ‘Holiday’.

Madonna was at the absolute top of her game; a sexy, exciting, dangerous, riveting pop superstar strutting, writhing and gyrating her scantily-clad torso through a set of stunning technical perfection. 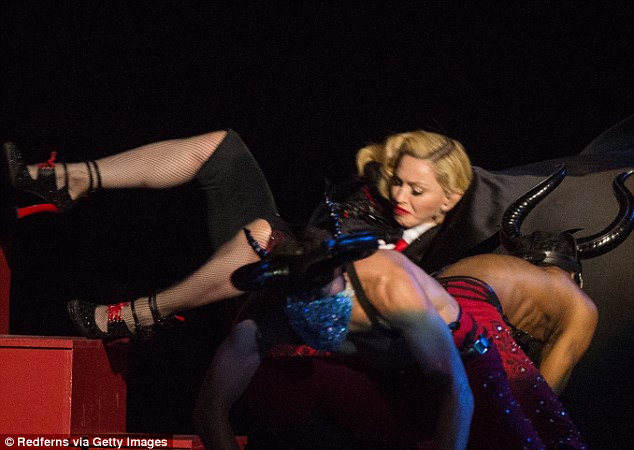 It was magical, unforgettable entertainment.

Cut forward six years and I watched her again at Wembley, this time on her Girlie Show tour.

I hated it. Something had gone terribly awry.

Bitterly disappointed, I wrote a savage review for The Sun newspaper, for whom I was the showbusiness editor at the time, and it was splashed all over the front page under the headline: ‘MAD, BAD AND SAD…the worst gig I have ever seen’.

Unsurprisingly, given The Sun sold over 4 million copies at the time, this didn’t go down very well with Ms Ciccone and a permanent Siberian frost descended over our relationship.

Since then, things have got steadily worse.

I’ve watched this undeniably supremely gifted woman descend into a pantomime freak, on and off stage.

As her music has got less popular – she’s recently been unofficially banned by Radio 1, Britain’s biggest station, for being ‘irrelevant’ – so her stunts have grown more grotesque, desperate and riddled with outrageous hypocrisy.

Asked three years ago before her upcoming MDNA tour if she had any ‘naughty surprises’, she sneered at her old rival Janet Jackson’s infamous 2004 Superbowl ‘wardrobe malfunction’ by saying: ‘You don’t have to show your nipples to be interesting, and it doesn’t mean you’re cutting edge if you do.’

She then promptly, and quite deliberately, bared her breasts in Turkey, where it caused huge offence.

At other times on the tour, she waved her naked backside at an audience in Italy, pretended to shoot people with fake guns in Colorado – scene of the Aurora movie massacre – and brandished Nazi swastikas in Paris.

All tasteless in the extreme, all done purely for headlines.

Last year Madonna even posted Instagram photos of her 13-year-old son Rocco clutching a gin bottle with the words: ‘The party has begun! Bring it!’

As I wrote at the time, what sort of mother puts that kind of image into the public domain, exposing her young teenage son to public condemnation?

A negligent, dumb, self-obsessed and repulsive one. That’s what.

Madonna is as immature as the gormless toyboys she dates and dumps with the zealotry of a pubescent teenager.

She likes them to be young and stupid because that way she keeps control, and never has to hear one of them say: ‘What the hell are you doing?’

And don’t even get me started on her Kabbalah nonsense, the PR-related ‘rescuing’ of orphaned African children, or that phony English accent she occasionally puts on.

As she gets older – Madonna’s now 56 – she gets ever more embarrassing.

Nothing is real, everything is for effect.

At the recent Grammy Awards, she stopped and flashed a moonie for photographers on the red carpet, revealing her fishnet stocking-ed derriere to the world.

She then pranced about on stage in a corset, thrusting her breasts and pelvis about like an ageing hooker in an Amsterdam red-light district window.

It was utterly toe-curling.

Compare and contrast with Annie Lennox at the same event, two years older than Madonna but oozing pure, ageless, class and grace.

So when I saw her fall at the BRIT Awards, I’m not afraid to admit I chuckled fairly uncontrollably for nearly two hours.

Sometimes in life, the good Lord sends us a message.

Madonna, a fellow Catholic, got a very loud and firm one last night: keep the cape ON, the fishnet stockings OFF, and start to act your damn age.

If not for your kids, or once fervent fans like me, then for the sake of humanity.