Walls that talk (and tweet): The ‘iPad house’ where every surface is a touchscreen (PHOTOS)

For internet addicts, it could be the ultimate way to stay in touch – an entire apartment turned into a giant, online screen.

It can also be controlled from anywhere – even bed – using gestures or speech. 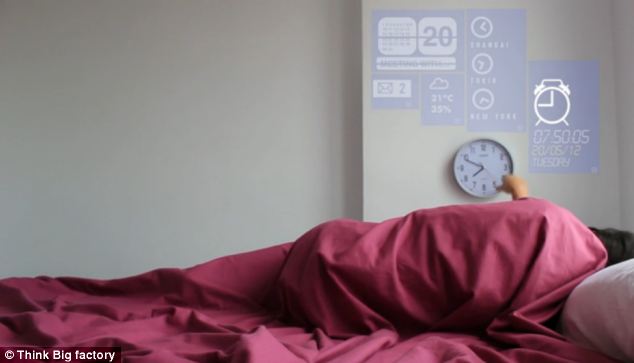 The Openarch system uses projectors to turn walls into giant touchscreens, allowing users to interact from anywhere – even bed

WHAT YOU CAN DO

‘The hardware is complete but only 40 per cent of the software is finished,’ said Ion Cuervas-Mons, director of Think Big Factory, a Spanish design agency which created the project.

‘Everything in the house can be used to communicate, the interface is ubiquitous.

‘Through projections that are activated by the presence of a person, we can control everything with the movement of the hands: the lights; turning on any electrical household appliances; music; even connecting to Skype for a conference from any part of the house.’

The system  aims to replace the current slew of keyboards and remote controls needed to interact with technology.

However, Mr Cuervas-Monsclaims much of the technology will be invisible.

‘I don’t think that an Openarch home is going to look any different,’ he said.

‘New technologies must be non-intrusive and natural.’

Mr Cuervas-Mons says the first inhabitant has already moved into the experimental apartment.

‘He is using some parts of the house, and we are learning from that. One of the prototype apps places the user inside Times Square, with projections on every wall

‘The main interface is in the living room, where you can see social networks, magazines, and play music just using gestures,’ he said.

The prototype uses sensing cameras such as Microsoft’s Kinect to track users, allowing them to swipe in mid air to move through menus.

The project started three years ago, and the prototype built in an apartment in the North of Spain, all using existing technology.

‘Now we have around 40% of the applications actually running – and we hope to finish soon, then begin developing products so people can actually begin using it.’ 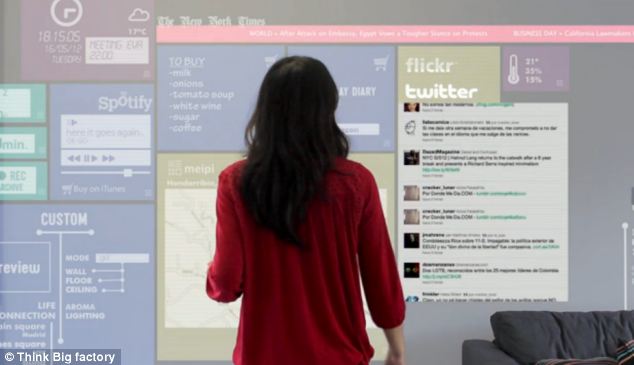 The system even allows video chats using a life sized video projection of the person you are talking to.- Daily Mail UK