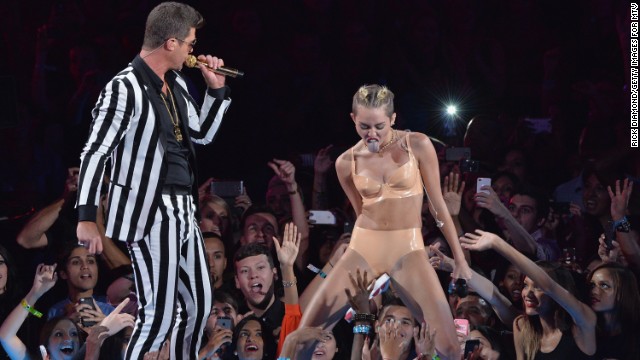 On Sunday night Miley Cyrus put on a performance at MTV’s Video Music Awards that appeared specifically contrived to elicit controversy and, by Monday morning, sure enough the controversy had arrived.

For those who missed it (and in fact I missed it until compelled to watch it on YouTube due to the controversy), Cyrus put on a performance that ranged from simply bizarre to crudely offensive, with plenty of twerking and rude gestures with a foam hand more reminiscent of a drunken frat party than good art.

Such a performance is bait, and I use that term on purpose, for the more sanctimonious set to thunder about the degradation of our society.

As if on cue, the Parents Television Council, a nonprofit “watchdog” group and perennial foil of naughty media everywhere, issued a press release condemning the VMAs, which, of course, succeeded in little more than drawing more attention to them.

The council called also for legislation that would allow viewers to select cable stations buffet-style rather than getting stuck with multiple channels they don’t want. I’m actually sympathetic to this kind of a la carte cable system (although adult viewers should have the opportunity to select more adult-oriented channels if they wish and efforts to scrub cable clean seem nannyish).

On the other hand, if you went in watching the VMAs, particularly with Lady Gaga headlining, with no clue you might see something shocking, you went in uninformed.

First, let’s put things in perspective. Were elements of the VMAs artistically dubious and in poor taste, particularly if you (somehow) didn’t see it coming? Absolutely. Are they the end of civilization as we know it? Absolutely not.

Although it’s common to imply that media images such as these are harmful to minors, evidence for this has been inconsistent at best. Two early studies linked watching sexy media with small increases in the likelihood of initiating sex earlier in the teen years. However, psychologists Laurence Steinberg and Kathryn Monahan reanalyzed one of the datasets and found that, with other variables properly controlled, the influence of sexy media was negligible.

And we must remember that, though explicit media are probably more available now than at any time in history, teens have been having sex later than in previous generations, and becoming pregnant less often. We have to be careful not to mix moral outrage, which may be justified, with a public health crisis when one is not apparent.

All of this outrage appears calculated to me, however (it doesn’t help that Cyrus’ father sits on the board of advisers for the Parents Television Council). The performers who do outrageous stuff do so on purpose because scandal sells. And “watchdog” groups themselves often thrive off outrage.

Such groups would wither financially if it were not for the public’s outrage and fear of media. The council’s website contains handy instructions on how not just to donate money but to include the group in your estate, give stocks, an automobile, etc. Fairly common for advocacy groups to be sure, but it still gives them skin in the game. Members of these groups may act in good faith, but let’s not mistake them for objective, financially uninterested parties.

The irony is that likely all the furor has probably only encouraged teens to see what all the fuss is about on YouTube.

If one is serious about reducing sexual content in the media, making a big fuss only draws attention. Telling teens they shouldn’t watch only makes them want to watch more. If you would like to see less of Cyrus twerking (and count me among those masses), the answer is quite simple: Change the channel. We need less outrage, less nannying and more apathy toward such silliness.