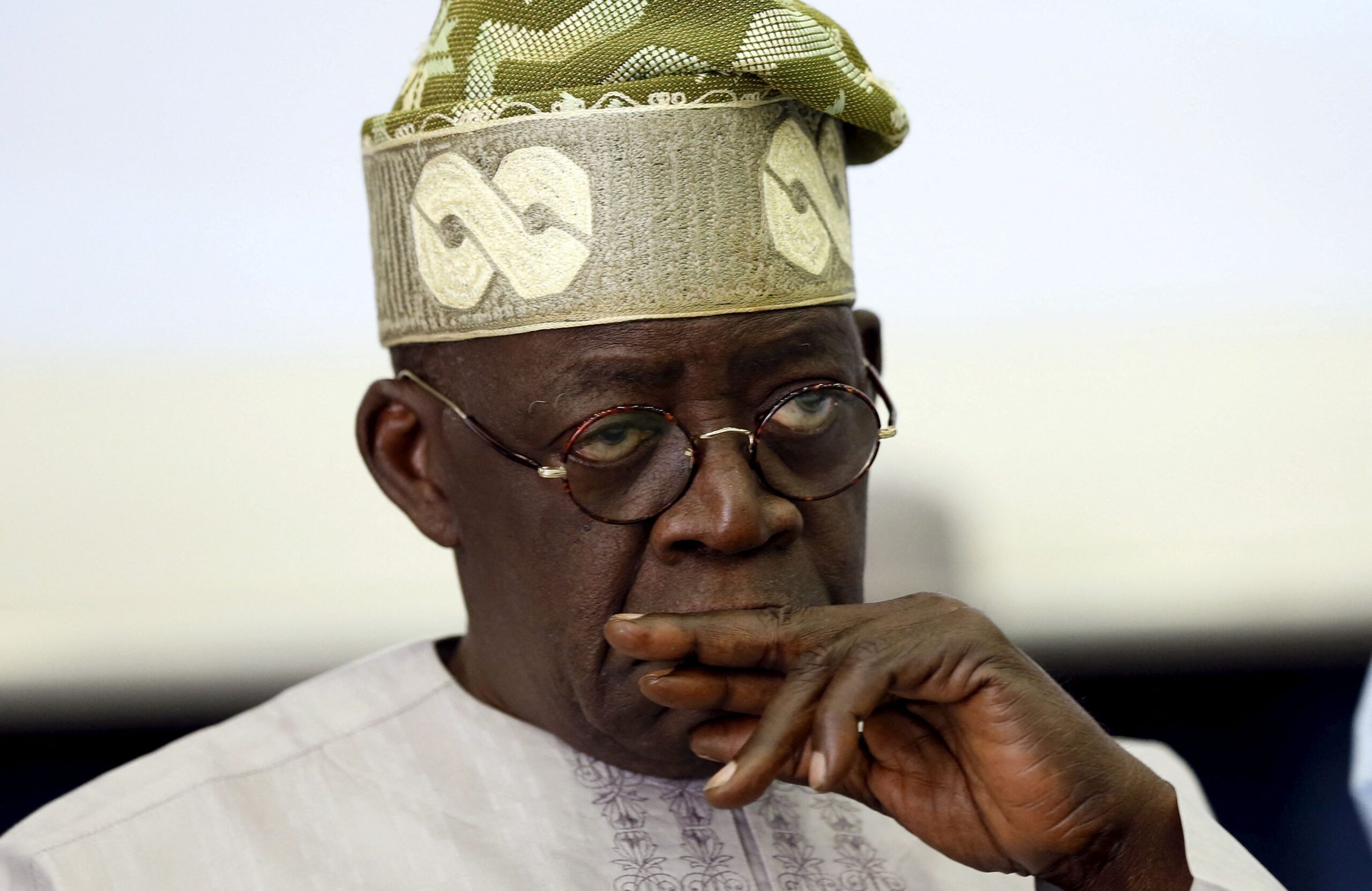 Tinubu: No Matter How Long You Protest, I’ll Remove Subsidy

Bola Tinubu, an All Progressives Congress (APC) presidential candidate, has stated that if elected president the next year, fuel subsidies will not be reinstated.

In his remarks yesterday in Lagos at the business luncheon with business owners titled “Business Forward,” Tinubu intimated that he would still remove the fuel subsidy no matter how long people protested.

In a statement sent by his media office and signed by Mr. Tunde Rahman, Tinubu stated that Nigeria would stop subsidizing fuel use in its neighbors.

“How can we be subsidising fuel consumption of Cameroon, of Niger, of Benin Republic. No matter how long you protest, we are going to remove subsidy,” he said.
The APC presidential candidate said his government would give room to allow the private sector to thrive by not interfering, while opening rooms for collaborations.

He noted: “Thus, where the private sector is doing well, my government will not interfere. Our guiding principle regarding economic policy shall be to provide the right policy framework so that business can flourish.

“But I want to do more than help existing businesses to exist. We must create the space, where new sectors and lines of business can open. We must grow this economy so that it can accommodate over 200 million people with a decent standard of living.

“My government will collaborate with the private sector to bring about massive infrastructure renewal that enhances economic opportunities, lower business costs and overheads while producing jobs that spur further growth and development through increased consumer demand. This is the virtuous economic cycle we seek to create.”

He also promised to work towards creating better security in the country to allow them an enabling environment to do their business, adding that, business and insecurity cannot thrive side by side.

On Security, he said, “I am committed to securing Nigerians from violence and the fear of such violence. Terror, kidnapping, and banditry have no place in the society I envision. Upon entering office, we will move to implement several measures:”

Increased numbers of both military and civilian security personnel as well as anti-terrorist battalions with integrated special forces units were among the measures, according to Tinubu.

“We implemented the RRS Scheme in Lagos. We can repeat the process for Nigeria. We need to address our economy while battling insecurity. We are aware that insecurity and business cannot coexist, he emphasized.

Six months after announcing the restructuring of power distribution corporations and the privatization of five power projects, the Nigerian government now says it intends to sell some of the nation’s electricity-generation businesses.

According to the administration, the sale will occur in the first quarter of 2023, and the money raised would go toward funding the budget for that year, Bloomberg reported on Thursday.

President Muhammadu Buhari unveiled a record-breaking N20.5 trillion budget in October for the next year, however, N10.78 trillion of that amount was not supported by revenue, resulting in a budget deficit of 4.8% of GDP.

The 562-megawatt Geregu power plant in Calabar, Cross River State, and the Olorunsogo power plant are the producing firms of Gencos up for sale.

The Bureau of Public Enterprises’ Alex Okoh announced to Bloomberg on Thursday that the bids for the companies will commence this month and close at the end of March.

The power projects that were shortlisted for privatization in July include the power plants.

The privately owned companies have struggled to produce electricity ever since the government transferred control in 2013.

Nigeria’s power system, which produces and distributes electricity to over 200 million people on average on a malfunctioning basis, averages 4,000 megawatts.

To end shortages, the government pushed the business sector to invest in electricity.

A governance structure for the construction of a $3 billion plant in Makurdi, Benue State, has been approved by the National Council on Privatization (NCP), in a related development.

The NCP meeting, which was presided over by Vice President Yemi Osinbajo and held at the presidential villa in Abuja, approved the proposal.

The largest hydroelectric project in West Africa is anticipated to be this one.

A public-private partnership approach will be used for the project’s development, and the plant will have a capacity of 1,650 megawatts.

Four students, who were apparently heading home for the holidays, were reportedly kidnapped by armed suspects along the Akunnu-Ajowa route in the Akoko region of Ondo state.

The Kogi State Polytechnic students were reportedly attacked on Friday in the notoriously criminal Ago Jinadu Axis in Akoko, which is known for kidnapping in particular.

As a result, the people of the Ajowa hamlet and its surroundings are gripped by gear.

When reached, ACP Muri Agboola, the Police Area Commander in Kare, stated that his men have been searching the forests around the Akunnu-Ajowa Akoko route for the kidnapped students.

Funmi Odunlami, a spokesperson for the state police command, could not be reached for comment.

The immediate past governor of Osun State, Gboyega Oyetola, his wife, Kafayat Oyetola and other former political appointees have been directed to immediately return official vehicles which are in their possession.

The directive was given by the Asset Recovery Panel of the Osun State Government on Friday in Osogbo.

The directive was made known in a statement signed by Olawale Rasheed, the spokesperson to the Osun State Governor, Ademola Adeleke.

The Asset Recovery Panel headed by Bashiru Tokunbo Salam revealed that the vehicles are valued at N2.9 billion adding that the former officials had gone away with the various models of vehicles without any legal basis for such action.

The statement disclosed that, “As at today, there is no law that authorised any elected or appointed officials to go with state vehicles after completing their tenure of office.

“The Chairman of the Asset Recovery Committee, Dr BT Salami reported that due diligence has been conducted and the committee has concluded that the affected past officials should return government vehicles in their possession.

“This is the first batch of vehicles to be retrieved. We will soon come up with the second batch. All affected officials should return the vehicles in their possession immediately to avoid coercive procedures for recovery of state assets.”

The panel also revealed that, “In the list of affected officials, Governor Oyetola alone has 11 vehicles ranging from Lexus Jeep, Toyota Prado jeeps and assorted models of costly vehicles. The wife, Mrs Kafayat also has in her possession several brand of governments vehicles which were taken away against provisions of the law.

“The former Deputy Governor has more than seven government vehicles in his custody contrary to the provisions of the law.

The committee urged that affected former government officials to comply with the directive or risk enforcement procedures.

The Osun State Governor, Ademola Adeleke on his inauguration day on November 27, 2022 dislcosed that he will issue an Executive Order setting up a committee to recover assets from officials of the outgone administration of Adegboyega Oyetola.

Also, during the inauguration of the committee, the state’s Deputy Governor, Kola Adewusi publicly revealed that the official quarters of the Deputy Governor was nothing to write home about.

Adewusi decried the high level of looting that had occurred in the quarters.

Defending himself, the former Deputy Governor, Benedict Alabi stated that he had moved out of the official quarters months before his tenure expired.

Former officials in the Oyetola administration has also come out to state that the vehicles in their custody were legally signed off to them by the state government under Adegboyega Oyetola.

They also accused the Governor Adeleke of withholding the November salaries of past political appointees who served during the outgone administration.

An allegation which the state chapter of the All Progressives Congress (APC) has called on the State House of Assembly to intervent and find a lasting solution to.

Atiku Abubakar has urged Senator Bola Tinubu of the All Progressives Congress (APC) to quit avoiding public debates as the campaigns for the February 25, 2023, presidential election heat up.

On Friday, Atiku spoke with Saturday Tribune via his spokeswoman, Kola Ologbondiyan.

The APC candidate was then challenged to appear before him and engage in a debate with him on all topics, including government, policies, programs, and background.

The PDP candidate said that Tinubu was skipping debates in order to avoid having to address questions about his background.

Ologbondiyan said: “We challenge Senator Bola Ahmed Tinubu to an unscripted debate with Atiku Abuba- kar because Tinubu has been dodging debates and even interviews with the media.

“He has been organising private sessions with groups which our campaign believes are all choreographed in his favour. At most of these platforms, he either reads a pre- pared script or speaks through proxies who respond to questions on his invitation.

“It is perceptible that the presidential candidate of the APC is not prepared to answer questions arising from the litany of allegations surrounding his past.

“But Nigerians deserve to hear from him as a candidate that desires to govern them. He should prepare himself to respond to their questions and make himself available for interviews in the public space. Atiku Abubakar has had several engagements like these, having prepared himself for leadership roles.

On his chances in the contest with Tinubu, Atiku’s spokesman boasted that the PDP candidate would defeat the APC candidate hands down in a free and fair contest.

He declared: “Tinubu does not have the requisite support that can deliver him in a presidential election. With the type of rejection that is greeting him in various states, there is no way he can secure the required 25 percent of votes in 2/3 of states.

“Even in Lagos, Tinubu has lost considerable foothold after being demystified as a failed and oppressive leader with litany of allegations. The traditional support that would have come to his party has now been balkanised by leading parties. So, where will Tinubu draw the support from when the South-West, where he played his politics, has almost become a lost ground?

“Atiku is the only candidate in the 2023 race who has the capacity of winning the constitutionally required 25 percent of votes cast in 2/3 of states across the federation,” he said.