Rihanna raised more than a few tweaked eyebrows when she attended the launch of Chanel’s Haute Couture Fall-Winter 2013-14 collection in Paris.

The sultry singer is currently travelling Europe while on her lengthy Diamonds World Tour, but took some time away from the road for a day of haute couture at the French capital’s Grand Palais on Tuesday.

But while the latest collection from Chanel designer Karl Lagerfeld was top of the agenda, Rihanna made sure all eyes were on her after as she went braless under an oversized shirt dress – and very little else. 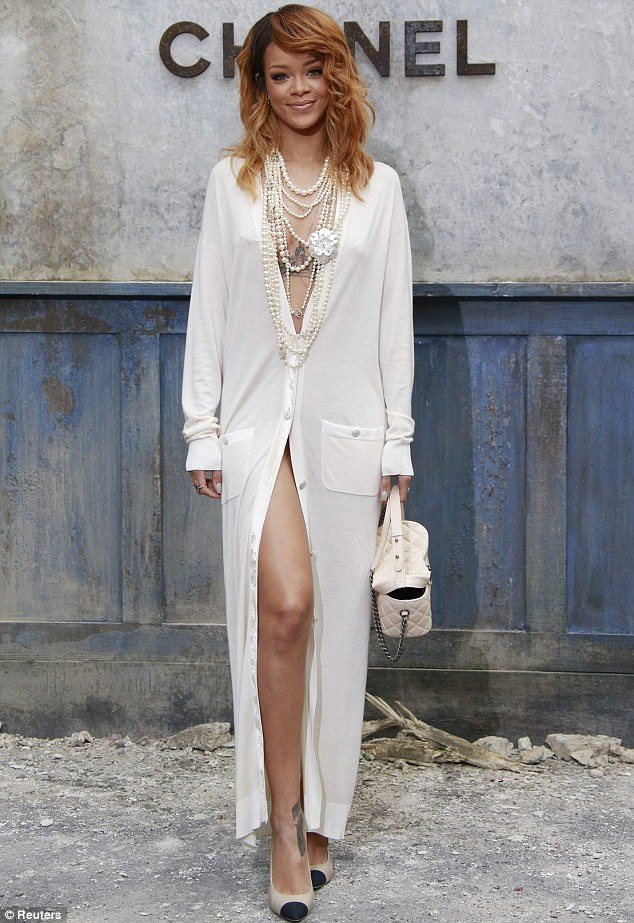 Looking good: Rihanna rocks up at the Chanel show in Paris

Not much to the imagination: Rihanna went braless under the flimsy shirt-dress which she accessorised with beautiful Chanel handbag and shoe 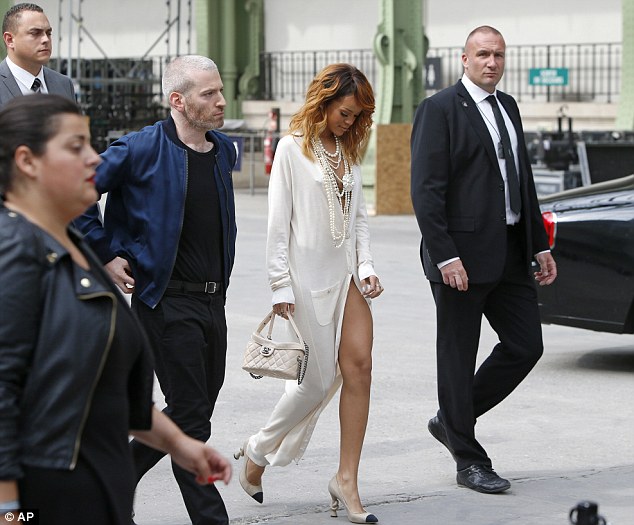 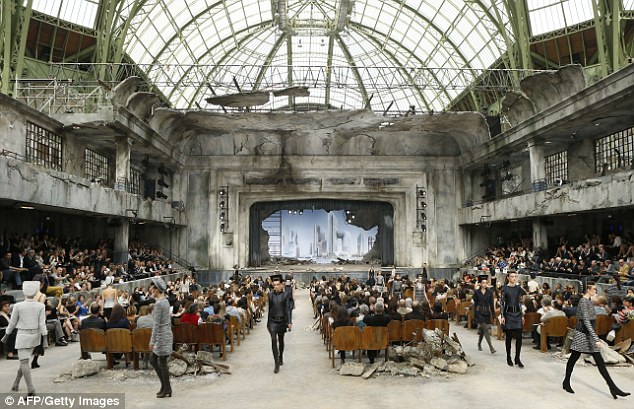 With a single button protecting the singer’s modesty, attention was drawn to her exposed cleavage, which was only partially covered by the stunning array of pearl necklaces she wore around her neck.

Rihanna’s matching heels with black detail and cream bag were the perfect accompaniment for her racy dress, one of Lagerfeld’s latest creations for the Chanel brand.

The singer’s exposed dress also showed off some of her distinctive tattoos – amongst them the large, winged dedication to her late grandmother etched beneath her breasts.

But even she seemed a little self-conscious as she clutched her bag to her lap in a vain attempt to conceal her modesty. 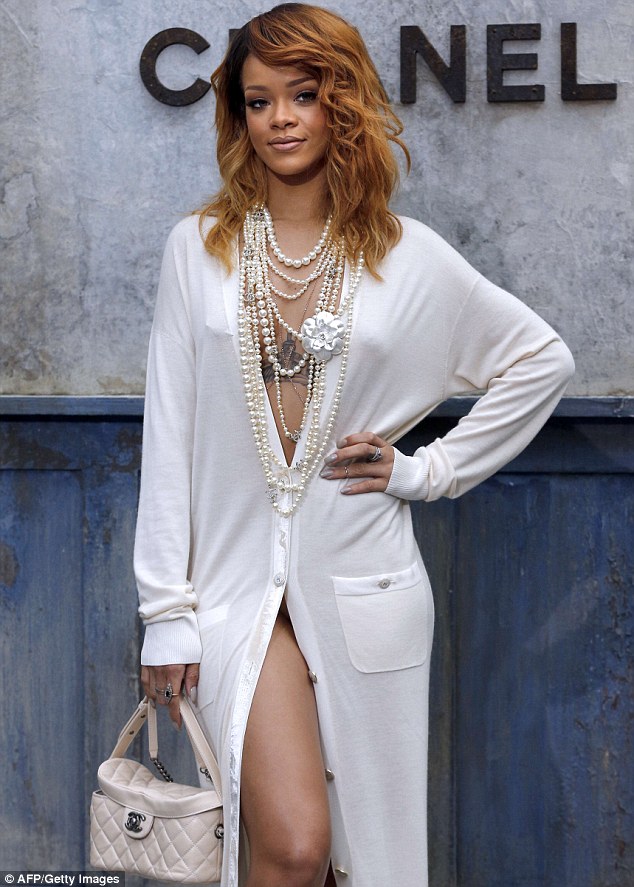 Careful! The outfit left very little to the imagination 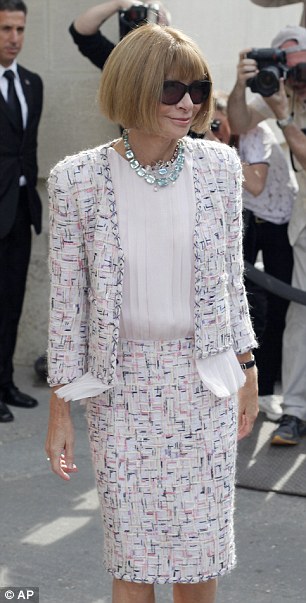 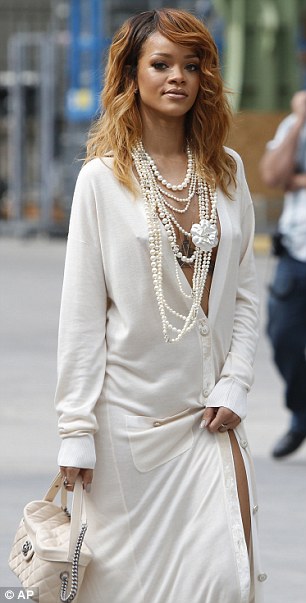 Dainty and demure: Anna Wintour wore a classic Chanel two-piece as Rihanna hogged the cameras with her racy look 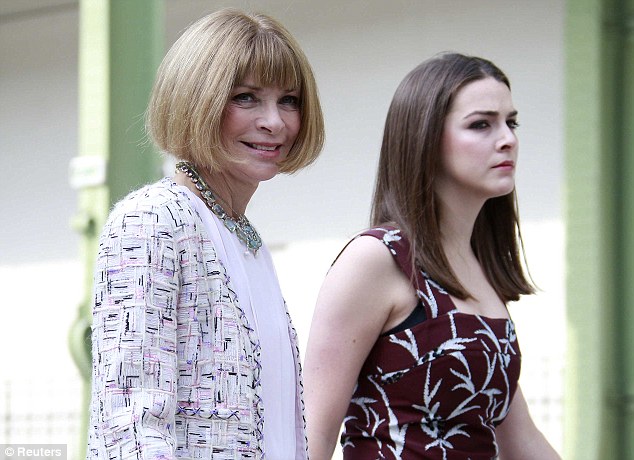 We are not amused: American Vogue Editor-in-chief Anna Wintour (L) and her daughter Bee Shaffer arrive

Rihanna’s simple make-up and surprisingly natural hair ensured ensured her dress – and her body – caught most of the attention when she arrived for a backstage photo-call.

Given her raunchy look, one wonders what Anna Wintour thought.

The famously forthright Vogue editor was also in attendance, arriving in a two-piece suit with her eyes hidden behind a pair of trademark sunglasses. 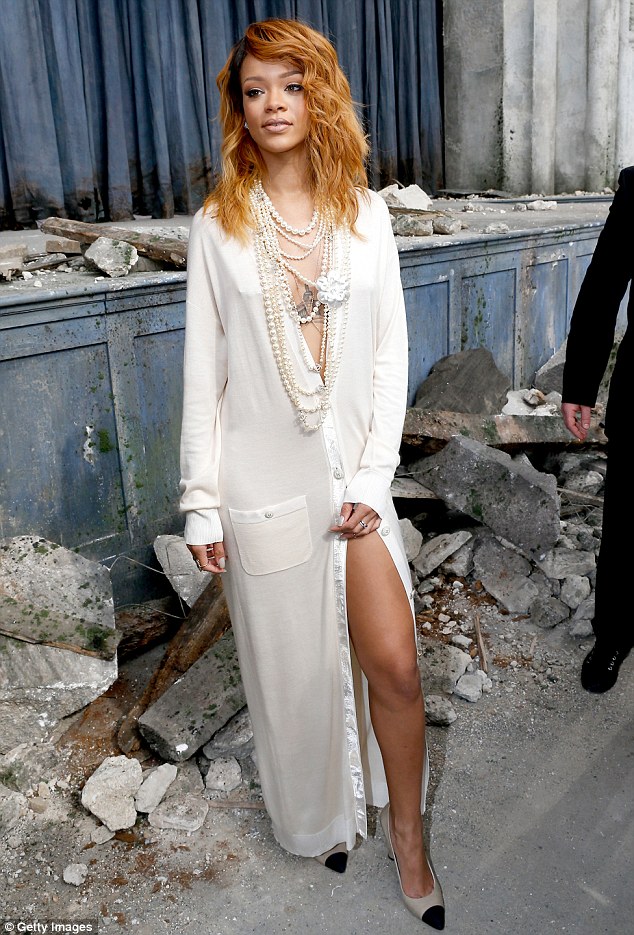 Showing some leg: Rihanna attends a photo call at the Chanel fashion show 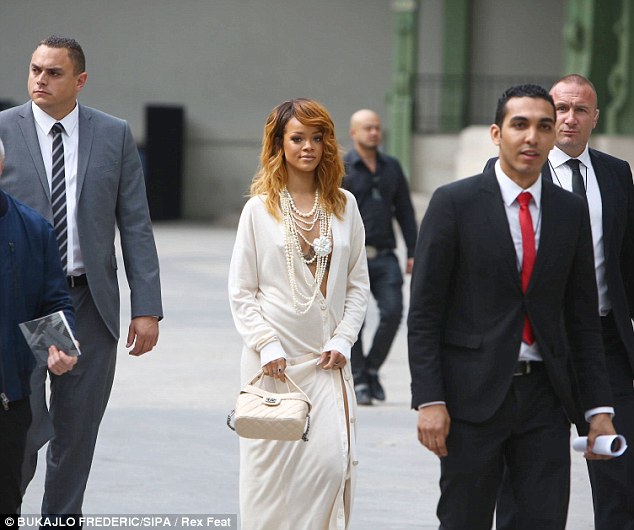 Revealing: Rihanna arrives with a group of bodyguards

Feeling self-conscious? Rihanna appeared to be struggling at points with her revealing look 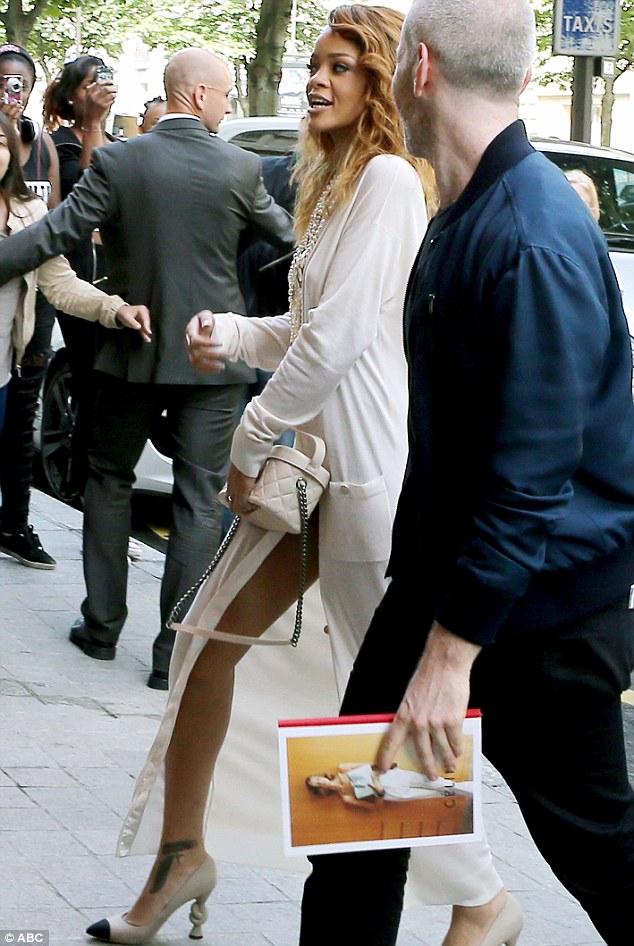 All white on the night: Rihanna flashed a lot of leg in her shirt dress

Rihanna’s relationship with Wintour soured last year when she reportedly kept the firebrand waiting for more than 40 minutes while she had her nails painted before last year’s Met Ball – hosted by Wintour – in New York City.

‘Rihanna planned to walk the carpet with everyone else but, sadly, her nails and manicurist took far longer than expected,’ a source later told the Mirror.

‘Her chauffeur was told to drive around the block several times, as she made last-minute changes, but her ‘people’ didn’t warn organisers she’d be late. 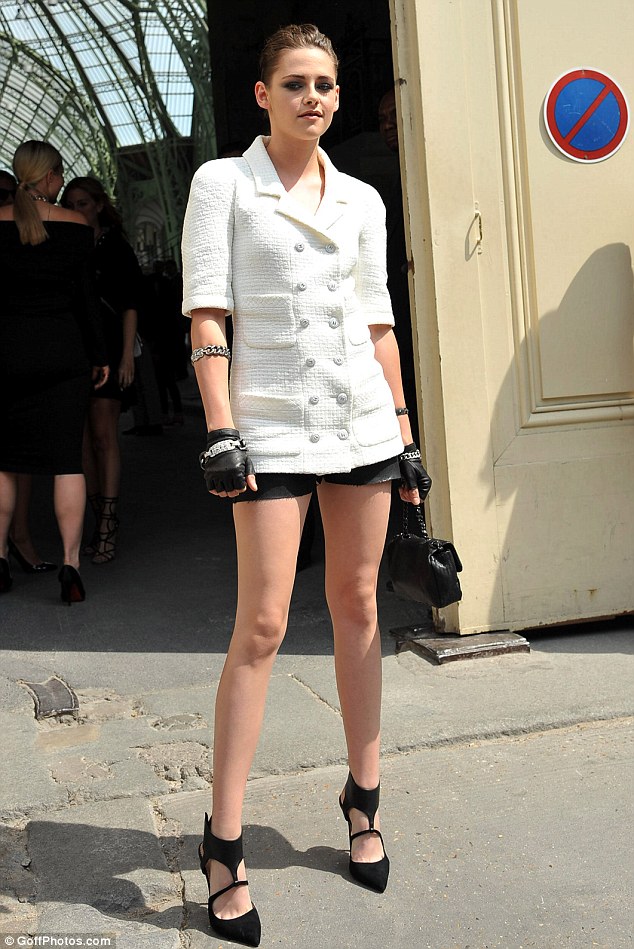 ‘She missed her slot on the red carpet and left Anna in a frenzy.

‘The pair had a heated conversation during the champagne reception. Rihanna will not be invited to any of her future events any time soon.’

Other stars to attend the Chanel show included actresses Virginie Ledoyan, Astrid Berges-Frisbey and Twilight star Kristen Stewart – who showed off her legs in a pair of short-shorts, which she accompanied with a white double-breasted jacket. 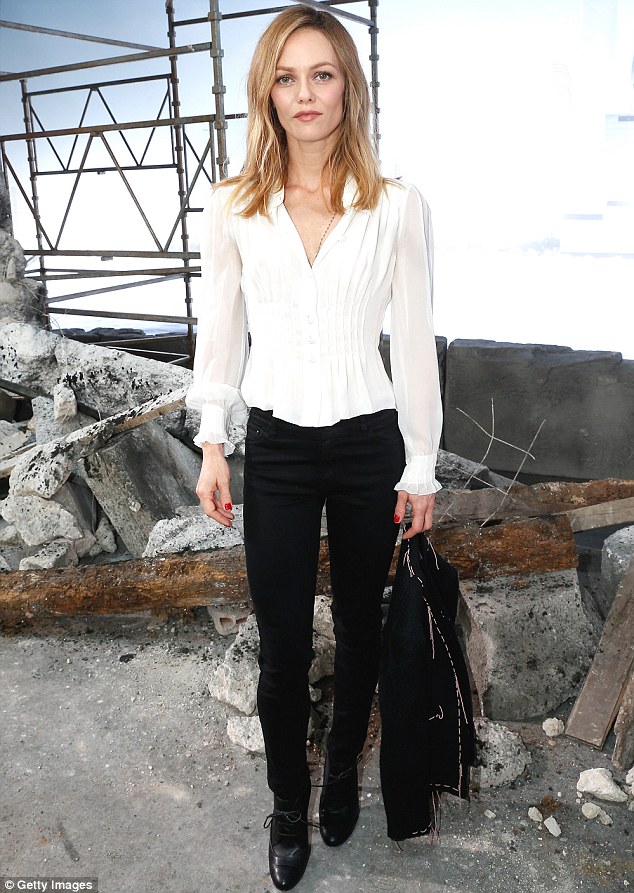 Keeping it simple: Vanessa Paradis wore a white shirt and black trousers for the show 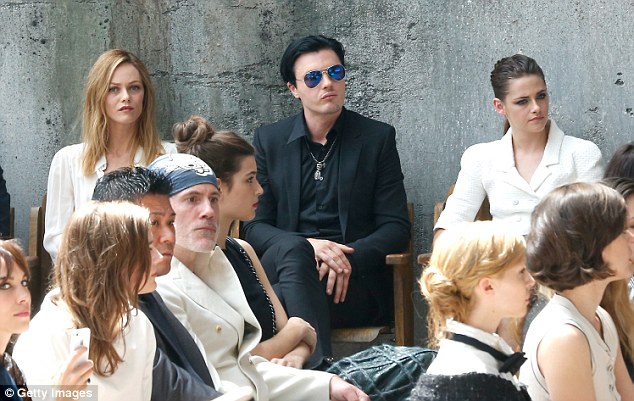 Taking it all in: Vanessa, Kristen and Michael Pitt sat in the front row to watch the action 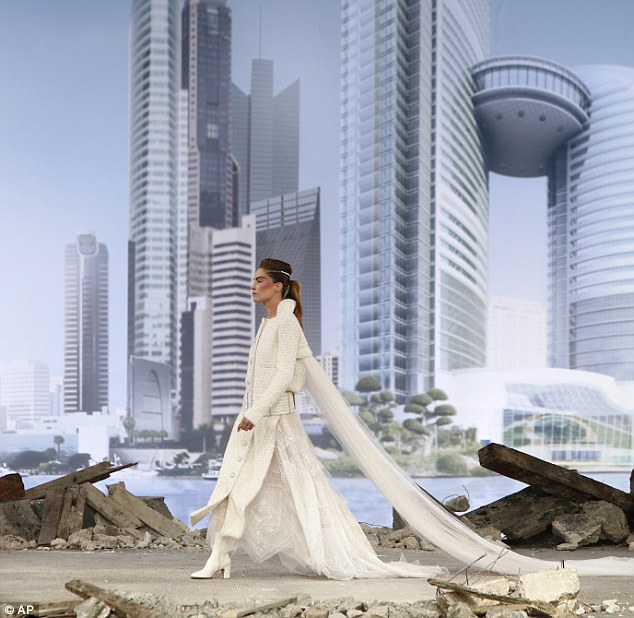 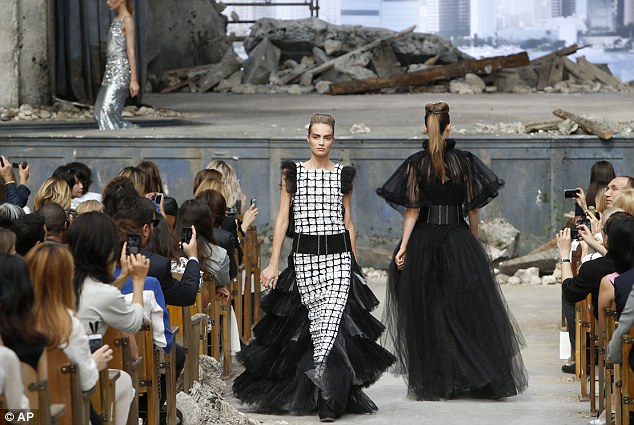 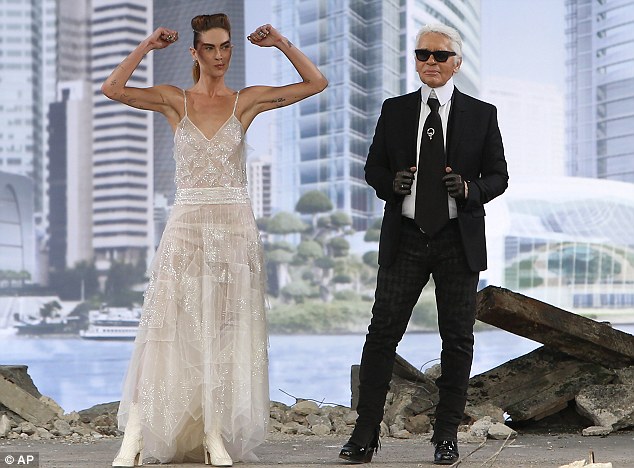 Legendary: German fashion designer Karl Lagerfeld, right, stands by a model as he acknowledges applause following the presentation of the Haute Couture Fall-Winter 2013-2014 collection he designed for Chanel 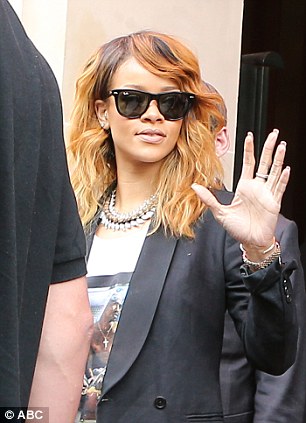 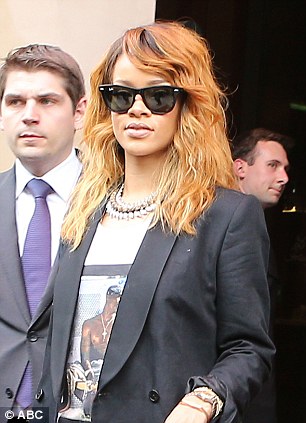 Hometime: Rihanna offers a wave after switching her Chanel cardigan for a smart black blazer and t-shirt as she makes her way back to her hotel