The global news cycle is already saturated with stories – mostly speculations – about Donald Trump‘s relationship – or the lack thereof – with Russia’s strong but controversial Vladimir Putin. There’s either something between the two that they are not sharing with the world (Americans, to be honest) or left-leaning anti-Trump Americans are just hell-bent on getting Trump out of office and they imagine his “relationship” with Putin is the surest way to do him in.

For much of Donald Trump‘s 6-month-career as the President of the U.S of A, his administration has come under fire for having colluded with Putin‘s Russia to manipulate the election that got the former into the White House in November 2016. Special Investigator Robert Mueller is presumably working hard to get to the bottom of this allegation. In the interim, the mainstream media machine continues to spin the wheels of the “Trump hearts Putin” narrative and not in the most favourable manner for the 45th POTUS.

The most recent of these machinations is the fuss over Trump‘s first known meeting with Vladimir Putin which will take place at the twelfth G-20 Summit in Hamburg, Germany. We advise you join us here in expecting nothing less than entertainment-column-worthy news from the fuss.

And while you are at it, we figured you should also look out for the body language of Germany’s “Iron Chancellor“, Angela Merkel in any relations she may have with her Kremlin neighbor during the two-day Summit. That’s one interesting relationship which we found to have verifiable roots.

According to the foreign policy platform called – wait for it – Foreign Policy, this interesting relationship between Merkel and Putin goes as far back as a decade, although we have reasons to believe there’s more to the two as they have been tagged “perhaps the oddest political couple of modern times” by Merkel‘s authorised biographer, Stefan Kornelius.

According to a June 2007 post on ForeignPolicy.com, Vladimir Putin once used a dog to intimidate Angela Merkel at an energy supplies-related meeting which held at the former’s Sochi residence in Russia.

“Angela Merkel apparently has a fear of dogs… she was bitten by one when she was young and has since kept her distance, according to an aide… Vladimir Putin is aware of this fact…” But when they met in 2007, ” Putin brought in diplomatic reinforcements”. Here’s how they tell the story:

The story checked out when we dug deeper on more popular platforms like The Telegraph. And there are pictures too: It’s not only Merkel. Our findings reveal that Putin has a totally different approach to foreign relations with his foreign counterparts while they are still new to the game that involves playing to what the people find sensational. At the time of the dog scare incident, Merkel had only been Chancellor for about two years while Vladimir had been President for 7 years (8 if you count his one year stint as Prime Minister between 1999 and 2000).

When after their first meeting at the 2001 Slovenia Summit, President Bush famously said about his private meeting his impression of Putin: “I looked the man in the eye. I found him very straightforward and trustworthy was able to get a sense of his soul”, Bush was, like Donald Trump, only about 6 years into his first term as America’s 43rd President.

Putin made no attempt to make people think otherwise or reclaim his macho reputation. But of course, the world and President Bush later learnt the hard way how wrong they were. Bush’s Secretary of State, Condoleezza Rice later wrote about that incident “that Bush’s phrasing had been a serious mistake”.

“We were never able to escape the perception that the president had naïvely trusted Putin and then been betrayed.”

Another famously reported one is his lunch meeting with Nicolas Sarkozy, within a month of Sarkozy‘s tenure as the French President. Sarkozy was said to have come out of the meeting drunk. So drunk he was happy to give a press conference where he said nothing meaningful:

There’s a contrary opinion on the nature of what had happened during their lunch date but it still does not play well for Sarkozy who everyone agrees became a fervent supporter of Putin from that day onwards.

Through all of these events, Vladimir carried himself with the grace of a man with a powerful Babalawo (Marabout), never responding except that his response somehow stoked the fires of the sensation. To the rumours about him intimidating Merkel, Putin opened up in 2016 saying that he had no idea about her fear of dogs and that he’d apologised. Compared to how he’s dismissed the fears of Americans about his relationship with Trump as “nonsense” (during his recent NBC interview with Megyn Kelly), his casual attitude to courting controversy is fairly established.

And frankly, it’s possible that the man just does not care. He was once accused of stealing a Super Bowl ring from Robert Kraft who owned baseball team, New England Patriots in 2005. They said “Vladimir Putin of Russia scooped up the “flashy bling” after a meeting of American business executives and Putin in Russia. 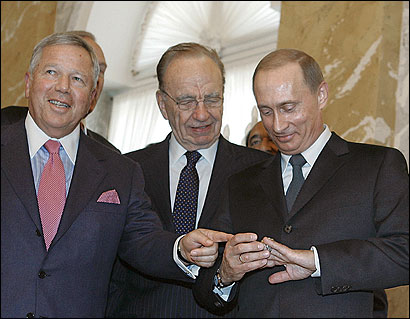 “According to Russian news reports, Kraft showed his 4.94-carat, diamond-encrusted 2005 Super Bowl ring to the Russian president, who, after trying it on, put it in his pocket and left.”

And guess what… Every single one of these events happened in June!

Donald Trump of course presents a different nut case but we’ll be watching for nothing but entertaining news from the erratic POTUS’ first meeting with Vladimir Putin.