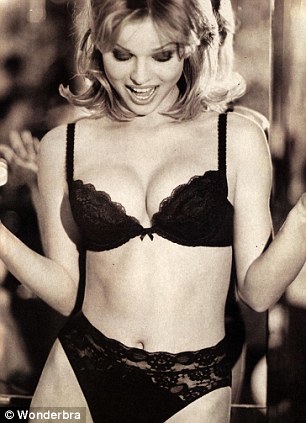 Protect your best assets: Look after your cleavage and it could stay as perky as Eva Herzigova’s

Earlier this week it was reported that breast tissue ages around three years faster than any other part of the body.

So, what are the best ways to halt – or even reverse – these visible signs, and make sure your best assets grow old as gracefully as the rest of you?

Would you spend £75 on a cleavage facial? No, this is not a joke: at London’s Ark salons (arkskincare.com) you can have a Cleavage Skin Response Facial that combines exfoliation and oils with masks and massage to firm, hydrate and nourish the skin.

If you would rather pamper yourself in private, you could even invest in 24k gold collagen breast masks (£52, jamelaskincare.co.uk). They come in a pack of ten and look rather like golden flowers with the centre cut out.

Simply slip them into place and, claim the manufacturers, the combination of gold and plant collagen will help to increase cellular metabolism and tighten the skin, making it feel smoother and firmer.

Cosmetic dermatologist Dr Sam Bunting recommends rather more conventional treatments, but she agrees that the skin of the decollete tends to be mistreated.

‘The skin here is thin, often exposed to sunlight, but frequently forgotten about when it comes to daily protection from UV rays,’ she says. ‘The result is blotchy pigmentation, crepey texture due to loss of elasticity and broken capillaries.’

Smoking can also take its toll on your decolletage, with some experts claiming that you can tell whether a woman is a smoker simply by the wrinkles on her chest.

Dr Bunting recommends using the same products that you’d use to rejuvenate your face to anti-age the skin below your neck. 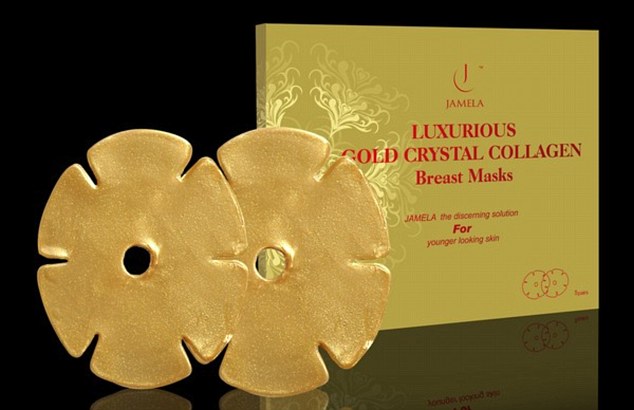 ‘I tell my patients they should be applying their skincare right down to their chest – and that means using a broad-spectrum sunscreen every single day, not just on holiday.’

If the damage is already done, forget cleavage facials and masks, there are three key ingredients you should be keeping an eye out for: ‘Vitamin C is a fantastic ingredient for the decollete as it builds collagen [which plumps the skin] and helps prevent and treat pigmentation,’ says Dr Bunting. Find it in Nubo’s SynErgetic Serum Visage Decollete (£45, nubobeauty.com).

Finally, vitamin A (retinol and retinaldehyde) will help repair the sun damage. But beware, Dr Bunting warns it can be an irritant, so start with a low concentration product such as Replenish Neck and Decolletage Cream (£15.95, nurtureskincare.co.uk). 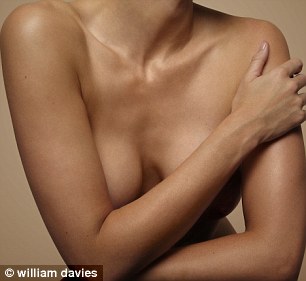 The position you sleep in could age your breasts

‘Your sleeping position can predispose you to wrinkling on the chest,’ says Dr Bunting. ‘Lying on your side can cause vertical lines in the cleavage, particularly in those who have larger breasts – and if the skin becomes sun-damaged, the creases may become fixed.’

According to the experts, anything comfortable enough to snooze in is unlikely to be supportive enough to stop gravity taking a visible toll: ‘The only bra that we’d recommend you sleep in would be a soft cup bra, but that wouldn’t separate the breasts,’ says Charlotte Elliston of lingerie experts, Rigby & Peller.

Sleeping on your back will help to avoid wrinkling the delicate skin between your breasts, but if you find yourself waking up on your side, despite your best efforts, a Kush (£29.99, thekushcompany.com) might be the answer.

An anatomically-countoured, non-slip cylinder, it sits between the breasts at night so they stay separated when you’re on your side. The idea is that it works like a small cushion, preventing the upper breast from sinking in to the lower breast and stretching the skin with it.

Working along similar lines is the La Decollette Anti-Wrinkle Bra (£42.95, decollette.co.uk) which looks like no bra you’ve ever seen. Rather than having cups that cover the breasts, it just has a cushioned section that sits in between them.

Research shows that this unconventional underwear could decrease the appearance of ‘cleavage crinkle’ after just one night’s use.

‘The problem with breasts is that while they’re subject to the same anti-agers as the rest of your body – such as sunlight and smoking – unlike anywhere else in the body, they are effectively two weights that are supported only by skin,’ says Patrick Mallucci of the British Association of Aesthetic Plastic Surgeons.

Gravity can be tough enough on your decolletage when you’re just out and about – research from the University of Portsmouth shows that even when you’re walking, breasts move around up to 33 per cent from their standing position – but when you run, it’s another story altogether.

‘Wearing a specific bra for exercise is crucial,’ says Charlotte Elliston of Rigby & Peller. ‘Breast movement during sporting activity can definitely contribute to loss of tone, sagging and stretch marks. But a good sports bra can restrict up to 80 per cent of that movement.’

Although all the exercise in the world won’t increase your cup size, working the pectoral muscles that support the chest can make things look an awful lot perkier.

Don’t bother with any Barbara Windsor-style arm flinging – instead, try press-ups or, if you’re in the gym, chest presses. 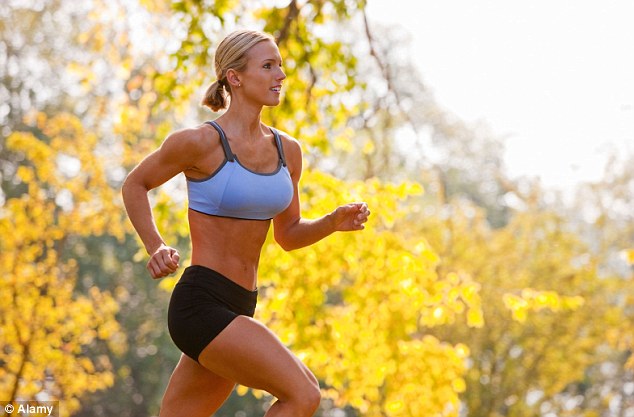 Support: Wearing a good sports bra when exercising will prevent breast tissue from stretching and sagging

‘Women come into my office and tell me that their children have ruined their bodies. Unfortunately, they’re right,’ says plastic surgeon Miles Berry who is co-author of The Good Boob Bible. ‘The high levels of oestrogen produced towards the end of pregnancy causes the ligaments to stretch,’ he explains.

‘Although they will shrink back, they won’t go back to where they were before and there’s not much you can do about that – except surgery.’

You don’t have to go under the scalpel, however. There is a wide range of pretty effective options that rely on syringes and lasers to get rid of sagging, wrinkles and age spots.

‘Many of the treatments that have been successfully used to rejuvenate the face can also be used effectively on the decollete,’ says Lorna Jackson, editor of consulting room.com, a website that provides independent information about aesthetic treatments.

‘Laser treatment (from £100) remains a good option for zapping the dark spots that are the legacy of sun worshipping, and chemical peels can also work well.’

Platelet Rich Plasma (from about £350) – also known as Dracula Therapy or Vampire Therapy because it involves drawing blood from the patient, separating out the platelets and reinjecting them into the skin – has become a popular form of skin rejuvenation and has been used successfully on the decollete, as well as the face.

One of the latest treatments – fat nanografting – involves harvesting fat from the patient, usually from their buttocks or stomach, then breaking it down into tiny particles that can be injected into the face or decollete.

‘It’s not simply about adding volume: when you inject fat, lines are smoothed and you get a glow that wasn’t there before,’ says plastic surgeon, Patrick Mallucci. ‘We think that’s down to the stem cells you find in it – it gives skin its sparkle back.’