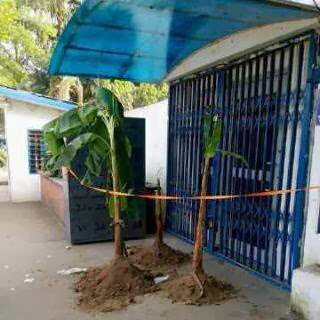 According to reports, a banking hall in Akwa Ibom is expected to remain shut after the workers were threatened with black magic aka ‘juju’.

The Plaza branch of the First Bank of Nigeria is under what was described as a “traditional injunction” by unknown aggrieved persons who dumped the ‘juju’ at the entrance to the bank.

The trouble is said to have been caused as a result of a disagreement between the bank’s management and the procurers of the juju.

According to Laila’s blog:

The building which is reportedly owned by Joesco Group of Companies is located at the heart of the town and is reportedly regarded as the most patronized bank in Akwa Ibom State.

Whoever gave the traditional injunction is still unknown but there are insinuations that maybe there’s a problem between the owners of the property and the bank or an aggrieved customer/staff of the bank versus the branch’s management.

As a result of the injunction, customers reportedly were seen in large numbers rushing in use the ATM to avoid being financially stranded as the week begins.


For now, no one knows whether the bank will be open for business tomorrow following the ugly incident.