MIRACLE: This woman smashed her head clean through a car windshield and survives (Viewer Discretion)

A Chinese woman miraculously survived a car crash which saw her head smash through the windscreen and become wedged in the hole.

The unnamed woman was a passenger in the car when it hit the back of a truck in southern China’s Guanxi province.

The force caused the woman, who wasn’t wearing a seat belt at the time, to fly forward into the windscreen. 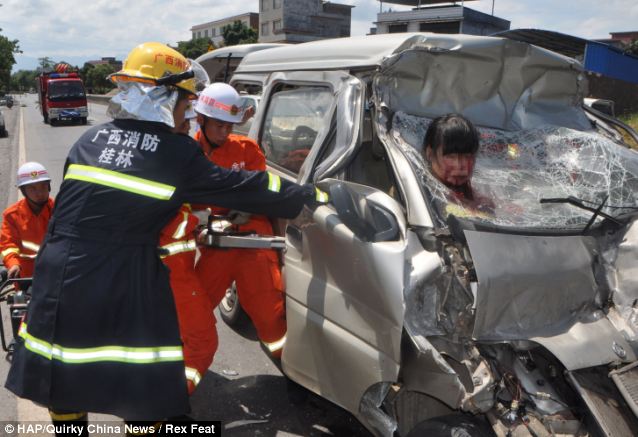 Rescue effort: Firefighters work to cut the woman free after the car she was traveling in crashed into the back of a lorry in China 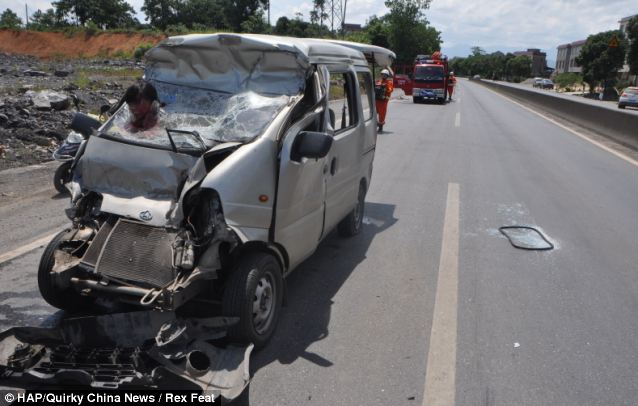 Horrific: The woman wasn’t wearing a seat belt when the car crashed in southern China

Her head broke the glass and she became wedged in the hole.

When fire crews arrived on the scene, they had to remove the car’s unconscious driver from the car before they could painstakingly begin freeing the woman.

Firefighters were then able to slowly enlarge the hole in the windscreen around her neck so that it was big enough for the injured woman’s head to be safely freed.

Bloodied and dazed, the woman was stretchered away by waiting paramedics and taken to a nearby hospital. 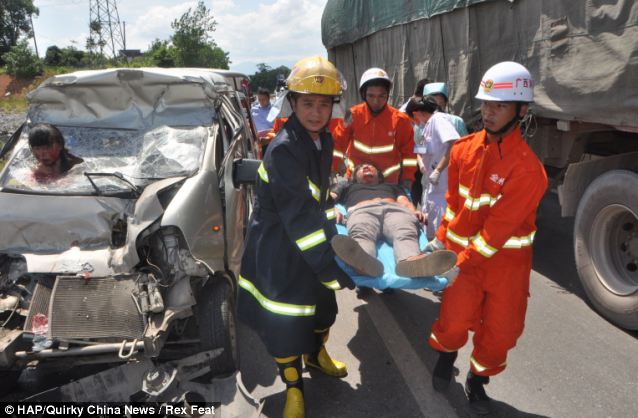 Stuck: Rescuers had to cut the woman’s male companion, who was driving the car, free from the vehicle before they could help her 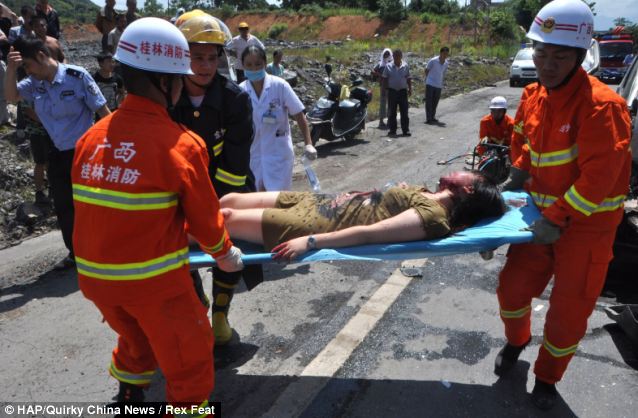 Free: The woman is stretchered off to hospital having finally been freed from the wreckage of the car

Miraculously, both the woman and her male companion are said to be making a full recovery in hospital.

The occupants of two vehicles had a lucky escape earlier this month when a 71-year-old driver fell asleep at the wheel in Taiwan and flipped his car through another motorist’s windscreen.

Kang and his family were travelling down a city road when the pensioner fell asleep at the wheel of his silver Daewoo.

His car entered the opposite lane, the one which Kang and his family were driving on, and hit a tree front-end on.

It then span 180 degrees through the air and the rear of the small hatchback went flying into their windshield.

Kang and his family only suffered minor injuries while the driver of the Daewoo also made it out alive.