New “cure” for obesity? Device sucks food from the stomach before digestion

A new weight loss invention will let dieters eat anything they want – by sucking food and drink straight out of their stomachs.

The rather gruesome-sounding system stops the body from digesting a third of each meal by pumping it out of the stomach via a tube inserted in the abdomen.

So far it has been trialled on 24 obese patients and now the company Aspire Bariatrics has applied for a patent on the unusual device in partnership with inventor Dean Kamen.

However, critics have been horrified by the system, which they say doesn’t tackle the causes of obesity. 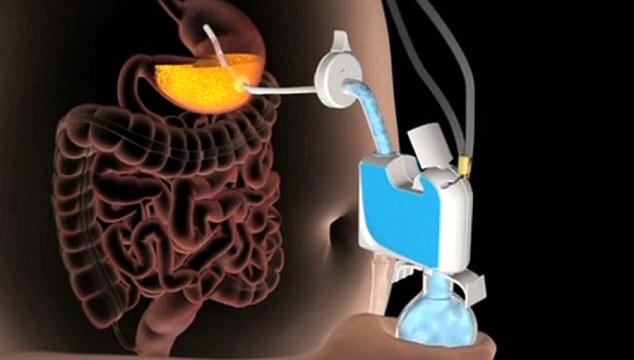 Brighter tomorrow: The new invention will suck food straight out of the user’s belly before the body can fully digest it 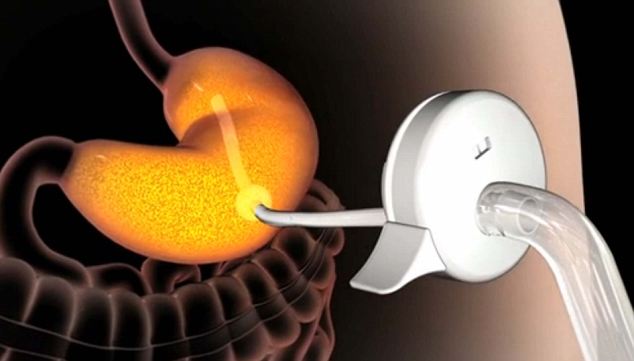 Not for every meal: One user complained the pump had issues ‘clogging’ with some foods 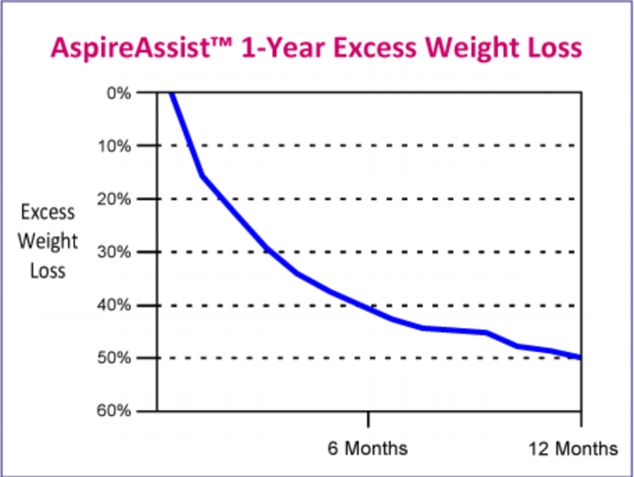 The latest product is being touted as an alternative to other procedures such as gastric bypass surgery, which discourages people from overeating by dividing the stomach into two pouches.

HOW THE ASPIRE ASSIST WORKS

A tube, called the A-Tube, is placed in the stomach. The thin silicone rubber tube then connects the inside of the stomach to a poker-chip-sized Skin-Port outside the abdomen. The port has a valve the user can open and close to control the flow of the stomach’s contents.

The patient then empties a portion of their stomach contents about 20 minutes after each main meal through this tube by connecting a small, handheld device to the port. The emptying process itself is called aspiration and takes five to 10minutes to complete.

The device would be used in combination with counseling and group support meetings to encourage healthier food choices.

Patients aspire after every main meal and then use it less often as they learn to eat more healthily.

If problems are encountered the tube can be removed in a 15minute outpatient procedure.

According to a statement from the company: ‘The AspireAssist Aspiration Therapy System works by reducing the calories absorbed by the body. After eating, food travels to the stomach immediately, where it is temporarily stored and the digestion process begins.

‘Over the first hour after a meal, the stomach begins breaking down the food, and then passes the food on to the intestines, where calories are absorbed.

‘The AspireAssist allows patients to remove about 30 per cent of the food from the stomach before the calories are absorbed into the body, causing weight loss.’

However expert Tam Fry, a trustee of the National Obesity Forum, said he was dismayed by the new system.

‘I haven’t seen anything as horrific as this before,’ he said.

‘You are supposed to eat and then digest, not pump your food out.

‘It seems they are trying to come up with a quick-fix for lazy people. It is far better to eat properly and in the correct amounts.

‘I understand that those who are obese need help, but we should be focusing on counseling and especially education.

‘The key is to teach children early about nutrition and a healthy diet.’

The company claimed that patients lost an average of 49 per cent of their excess weight, equivalent to 45lbs, during the first year of using the system in a U.S clinical trial.

However, the pump reportedly struggles when attempting to break up large foods.

There have also been concerns that the system has a number of similarities to bulimia, where people make themselves sick after eating.

However, the company said AspireAssist does not cause eating disorders and there is little overlap between people with obesity and the psychological disorder. It added patients would be screened for the condition before being approved.

According to the patent, the process of removing ingested food could potentially be improved by alternating the infusion of liquid into the stomach with the removal of material from the stomach.

The company is also considering capturing stomach acid and returning it to the stomach to help break down food further, as well as adding nutritional supplements or medicines to the infused liquid.