Oh no, we can’t watch! Fashion designer, Roberto Cavalli, 72, is given a deserved wash down by his much younger girlfriend (PHOTOS)

It may look like glamorous Lina Nilson is providing community service aboard an exotic retirement boat.

But the brunette beauty – who is in her 20s – is actually helping her boyfriend Roberto Cavalli shower off on a particularity hot day in Sardinia.

The lovers have been sailing around on 72-year-old Roberto’s luxurious super-yacht, with the fashion designer being intimately hosed down for all to see and without a care in the world. 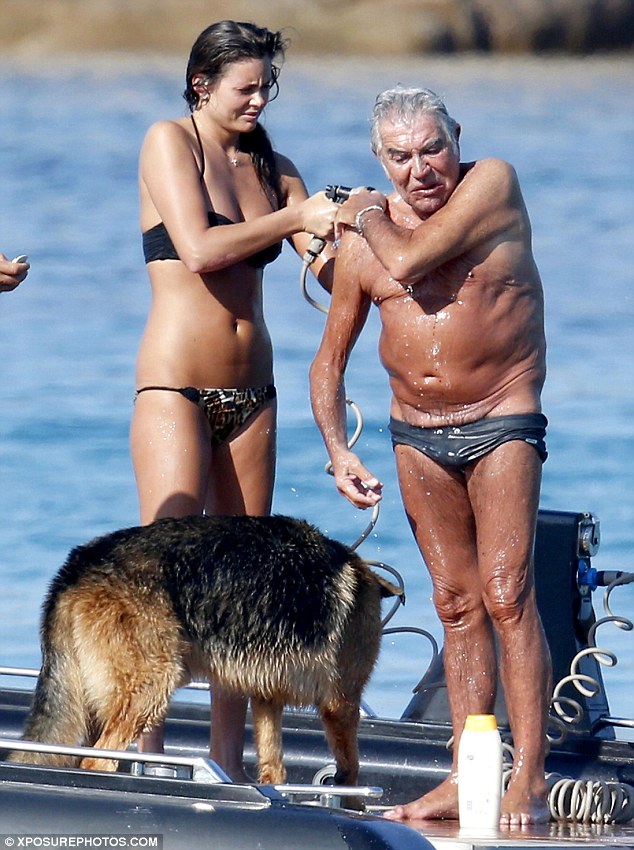 Cooling off: Roberto Cavalli enjoyed a loving outdoor shower with his girlfriend Lina Nilson on his private yacht in Sardinia on Monday

Well known for wearing very little in the sun during his downtime, Roberto didn’t disappoint his fans as he stepped out wearing a very short pair of swimming trunks.

With a reasonably in-shape body for a gentleman of his age, the elderly Italian was proud to show off his sagging features for an outdoor shower.

Meanwhile girlfriend Lina was more than happy to oblige with his request as she stood with hose in hand wearing a black bikini top and animal print bottoms. 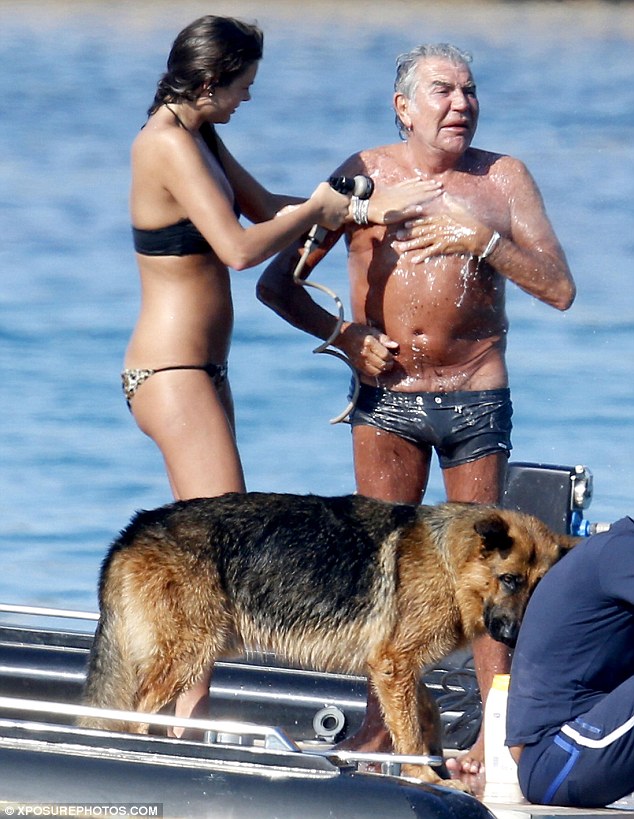 But things got rather unsightly when it came time for Roberto to freshen up his lower regions.

And the pair were willing to show off just how intimate they are with each other as Roberto exposed himself to his younger lover and she happy gave a helping hand to clean his private areas.

With his body reasonably tanned, the designer flashed his white bottom for the world to see as Lina got in and gave him a very personal rub down.

Hands on: Lina got very involved in cleaning her aging lover out in the open air 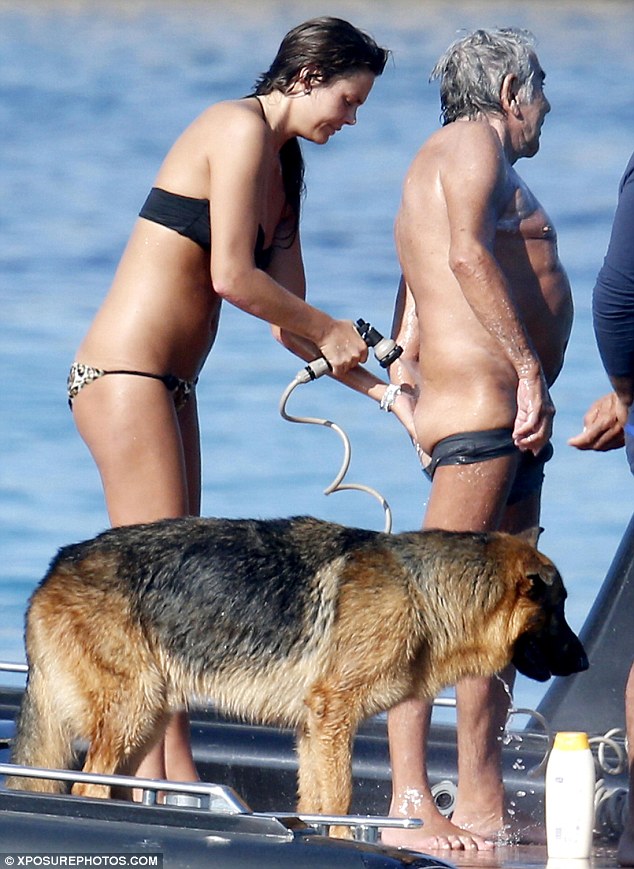 Glamorous life: It is likely that Lina has touched Roberto much more intimately in the past so a hose down should not be an issue

While most viewers would have been running screaming, the couple’s pet dog seemed unconcerned by the event.

The animal was also hosed down as part of proceeding during the hot afternoon sun.

Shower show aside, the couple seemed very happy to be in each others company. 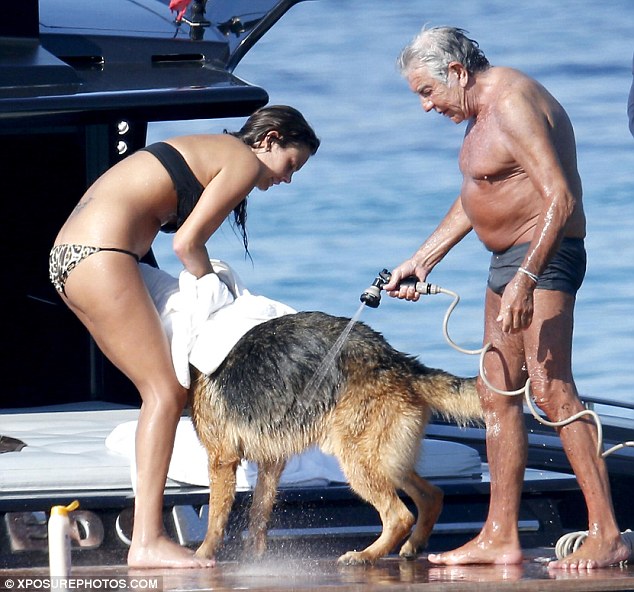 Wet dog: Roberto’s pet pooch was also given a hose down in the hot afternoon sun 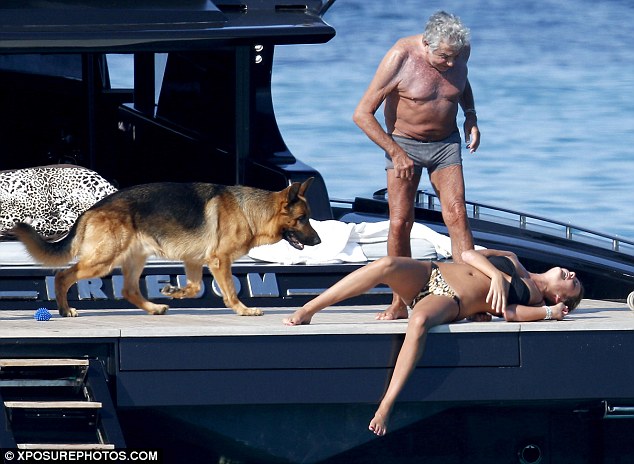 Something funny? Lina was spotted in fits of hysterics as she relaxed with Roberto on his boat in the afternoon

Perhaps demonstrating he is a secret comedian, Roberto talked to his lover as she rolled around on the deck in fits of hysterics.

While he is notorious for wearing next to nothing, the designer did recently pass judgement upon the Dutchess of Cambridge – commenting that she should be more alluring with her style choices.

‘A princess should be sexy,’ he told Vogue magazine, before adding: ‘She is young, she is beautiful – I would like to create something special for her.’ 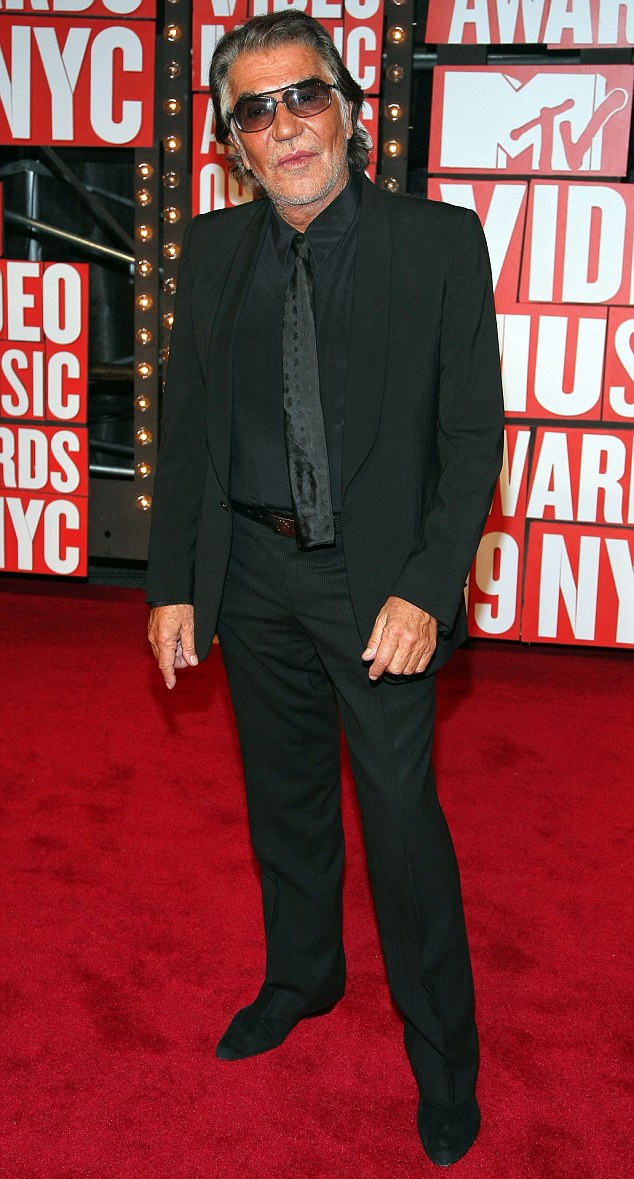 Covered up: Roberto may like to be free of clothes when on holiday but tends to dress up well for red carpet affairsRead more: Daily Mail