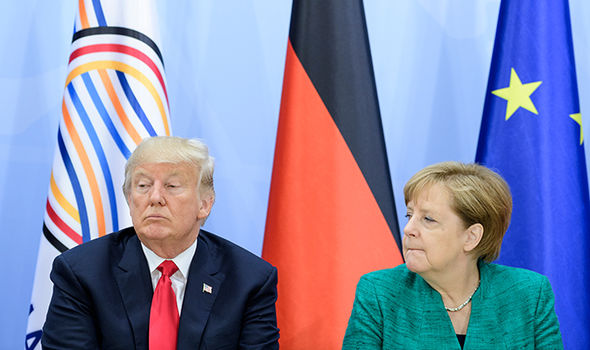 President Donald Trump has lashed out at the German chancellor, Angela Merkel over the latter’s comments on his war of words with North Korea’s Kim Jong-Un, UK Express reports.

The week longed threatening words thrown across borders has heated the polity harder and aroused tension in the global space with concerned players stepping up preparation for imminent provocations.

Mrs Merkel who is running for a fourth term at the helm called for a diplomatic solution to be deployed to curb the crisis when asked about Trump’s comments over the brutal regime.

The German leader made the comments when asked whether she would “stand by the US in the eventuality of a war?” – a question she answered smartly and indirectly in a dig at the US President by saying, “I consider an escalation of rhetoric the wrong answer”.

“I do not see a military solution to this conflict” She said, but “rather than a unilateral strike from the US, it should work with regional powers in the area, China, South Korea and Japan, and the United Nations (UN) security council, to bring an end to the spat”.

When asked about his say and reaction towards the Chancellor’s words, Mr Trump dismissed them saying, “Let her speak for Germany.