What was she thinking? Madonna lets it all hang out in fishnet body stocking (PHOTOS)

She has made a career out of shocking people.

And the song remained the same as Madonna forgot to wear her trousers to the 2013 Met Gala in New York on Monday.

The 54-year-old seemed to be revelling in the attention as she posed on the red carpet, flaunting herself to the maximum by posing from all angles. 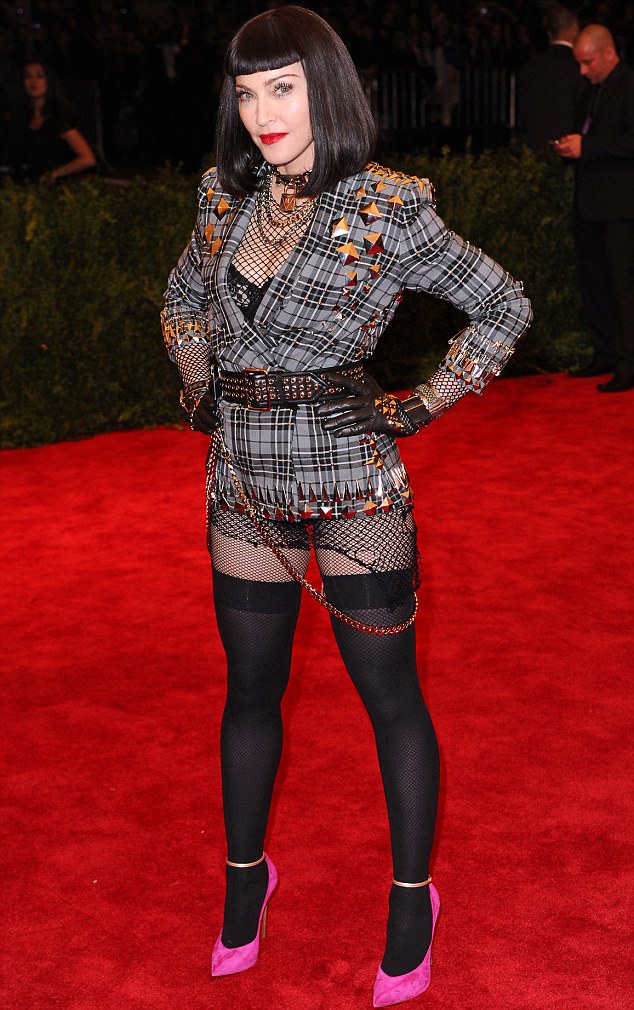 She just cannot help herself: Madonna forgot to wear her trousers for the red carpet of the 2013 Met Ball in New York on Monday night 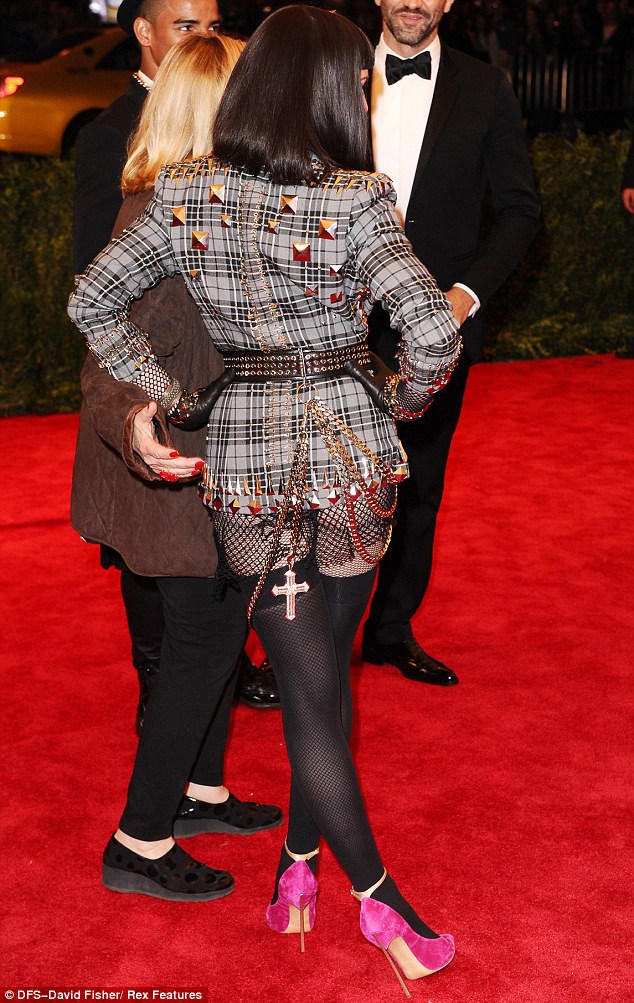 Rearly old trick: The ageing posptrel pulled one of her favourlte stunts by hanging a crucifix on her rear

And no wonder, for the ageing pop star really pushed the boat out for the annual opening of the Metropolitan Museum’s fashion exhibit at the Costume Institute.

She wisely covered up her upper arms with a grey studded tartan jacket, and highlighted her lower half in fishnet body stocking, stay-up stockings and pink suede stilettos.

And the canny old campaigner also wheeled out her favourite shock tactic by hanging a crucifix over her rear.

Just to top off her Givenchy Haute Couture by Riccardo Tisci look she wore a brown wig, which seemed to have come straight from Uma Thurman’s Pulp Fiction wardrobe.

Stars are out to shine at Met Ball… But what are they wearing?

Out in front: Madge’s audacious outfit helped her outmaneuver young pretenders such as Katy Perry and Kylie 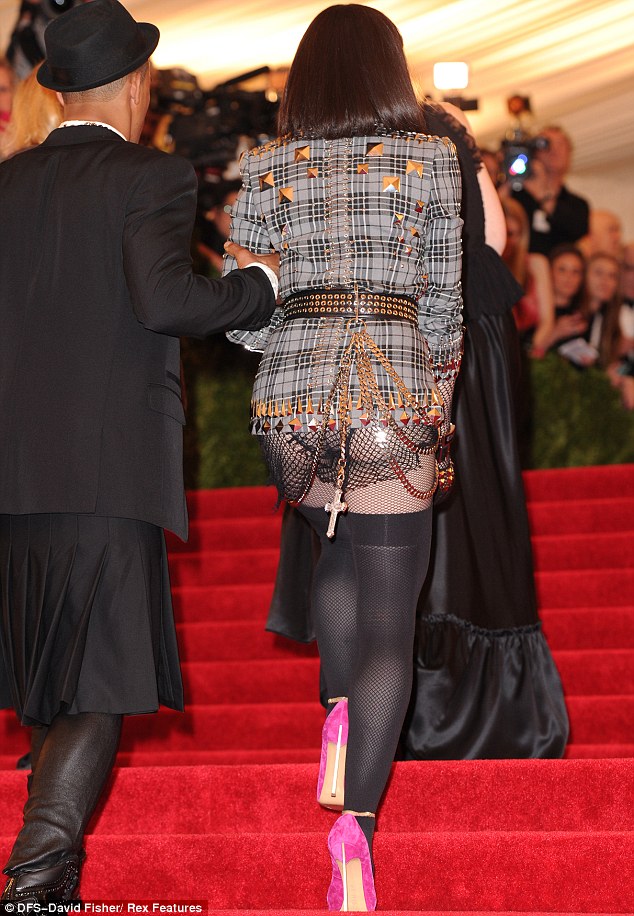 Bottom of the class for originality: It is far from the first time Madonna has tried to shock by subverting a crucifix 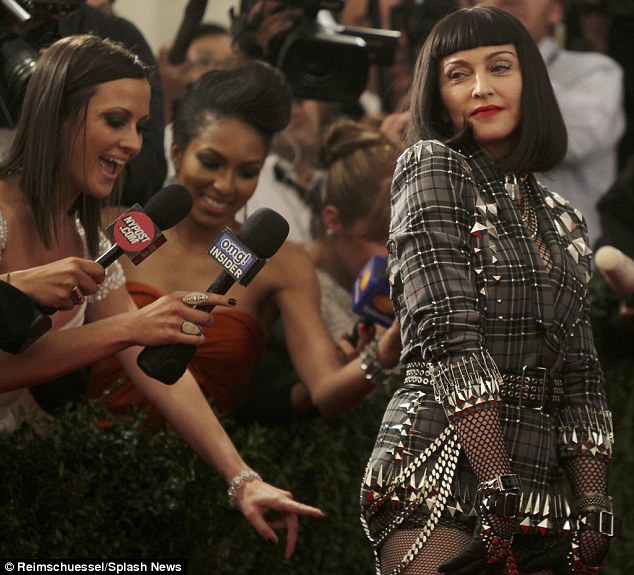 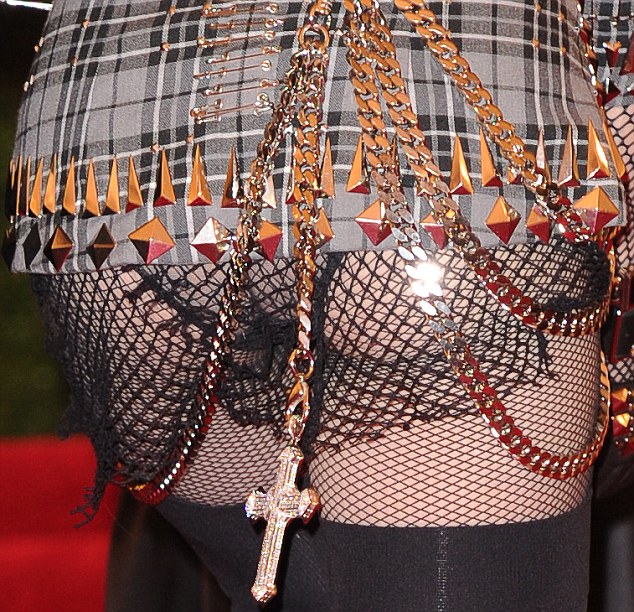 Praise be: At least the ageing pop icon had remembered to wear her most vital piece of clothing 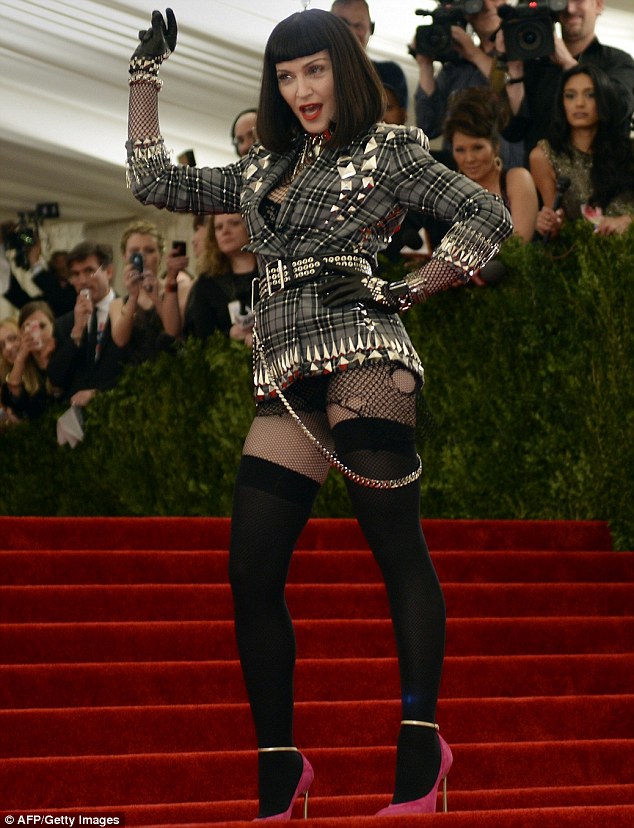 Lapping it up: The old warhorse was revelling in all the attention as she hammed it up on the red carpet

She also shared some of her trademark rapier wit with reporters, and when asked what her most rebellious moment was, she said: ‘It changes by the day, by the hour!’

And when another media acolyte asked her what is punk, she added: ‘It’s not caring what people think!’

Her look, which would have fitted in perfectly during her 1992 Erotica era, was in stark contrast to her more girlie appearance at the 24th Annual GLAAD Media Awards in March.

She dressed up like a girl scout for the exciting event in New York, though she subverted the look slightly in leather fingerless gloves, fishnet tights and combat boots.

And while for seasoned fans of the star her Met Gala look was very much a case of same-old, same-old, it still helped her stand head and shoulders among young pretenders to her queen of pop throne such as Katy Perry, 28, and 44-year-old Kylie Minogue. 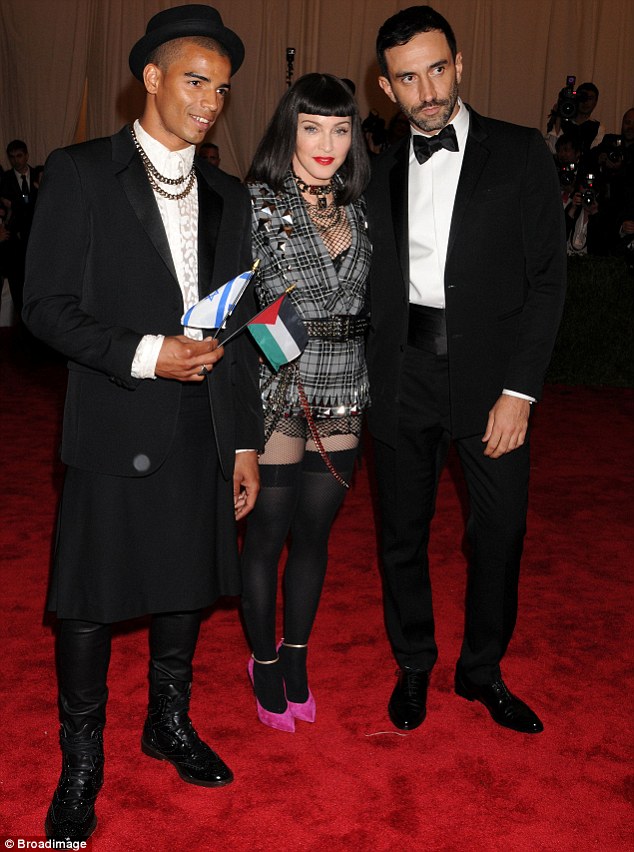 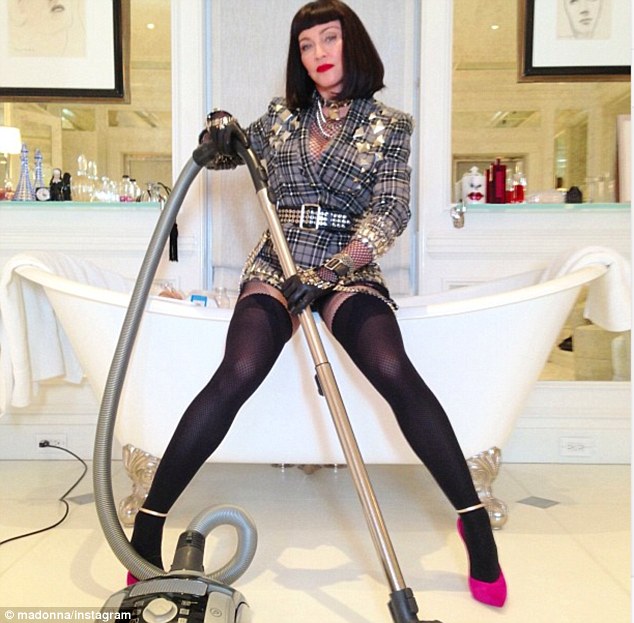 Twit: She would have had her fans roaring with laughter after claiming she was ‘tidying up before the Met Ball’ on Twitter 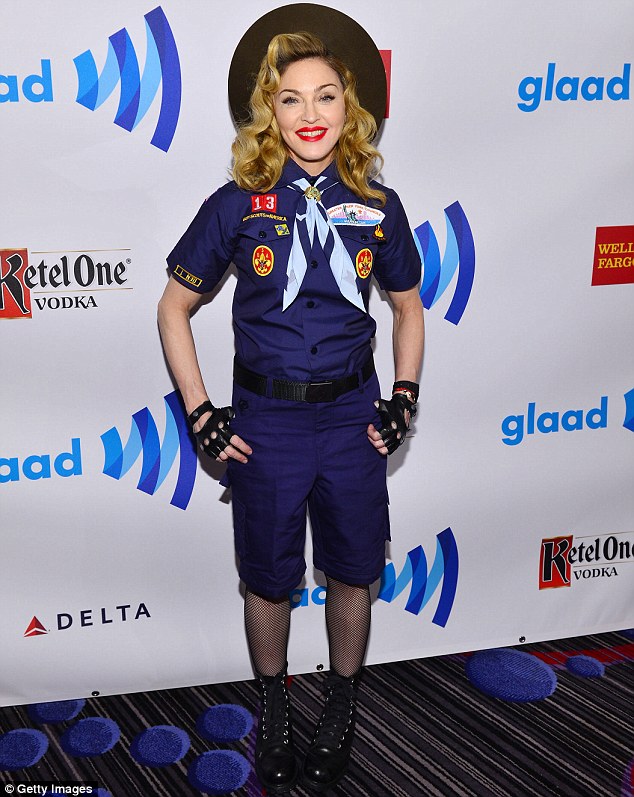 She’s no girl scout: The singer adopted a wildly different look for the GLAAD Media Awards in March 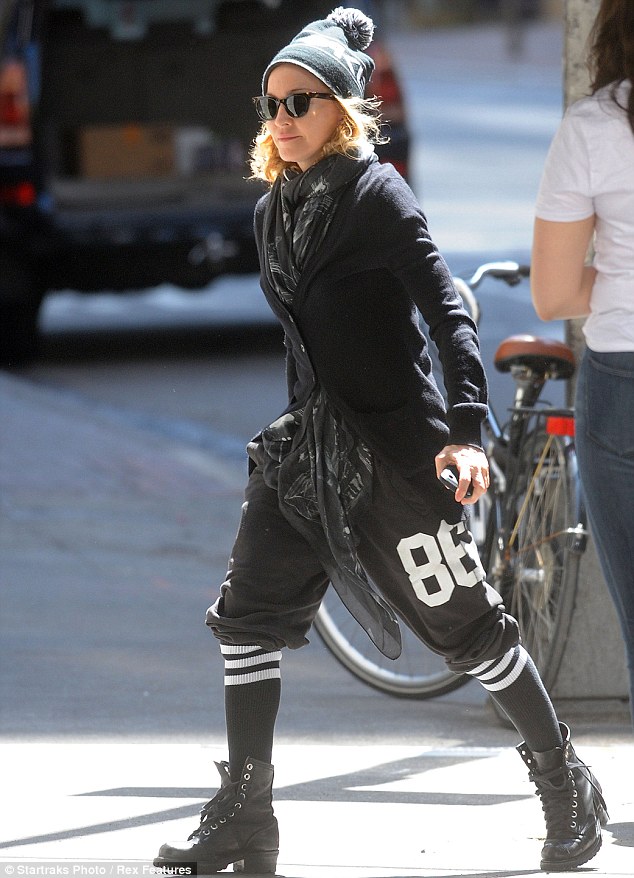 Dressed down: But even when Madonna wears a more relaxed outfit it is far from conventional

Must try harder: Kylie and Katy Perry could still learn from the musical elder Madonna on how to grab attention 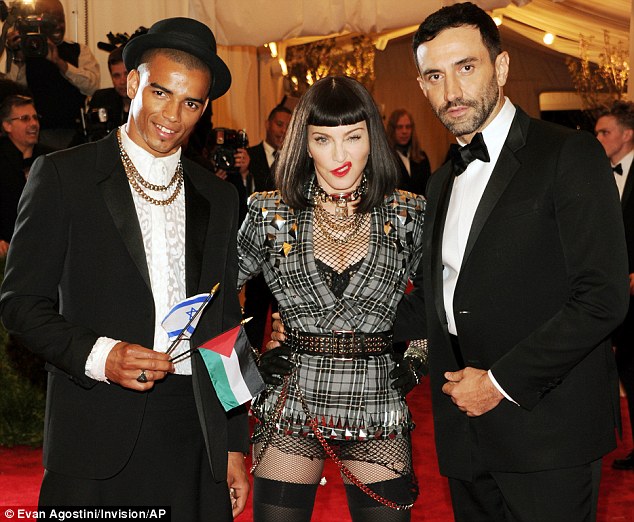 Bringing it: The punk act didn’t stop for the pop legend as she stood next to beau Brahim Zaibat (left) and designer Riccardo Tisci (right) 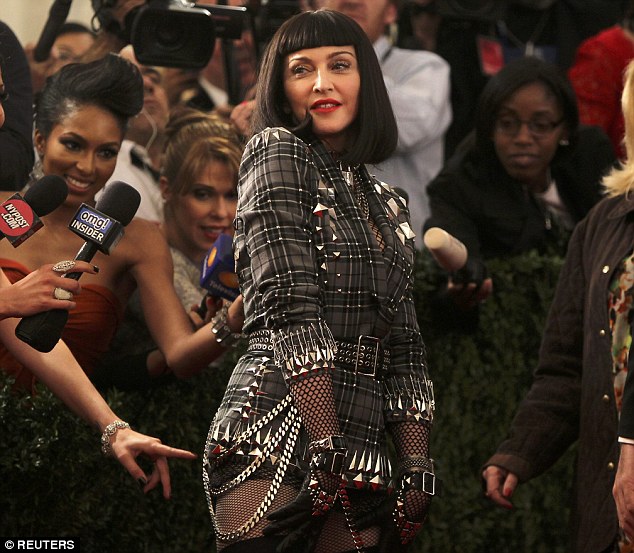 Center of attention: The singer reveled in the attention she garnered for her outrageous punk outfit 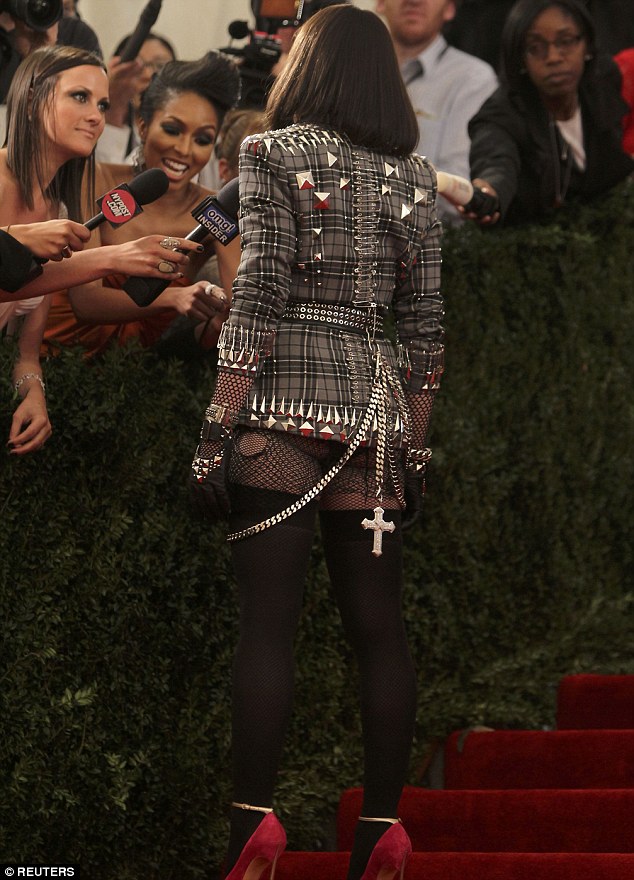 Accenting her assets: A crucifix hung below the pop star’s derriere where pants should have been 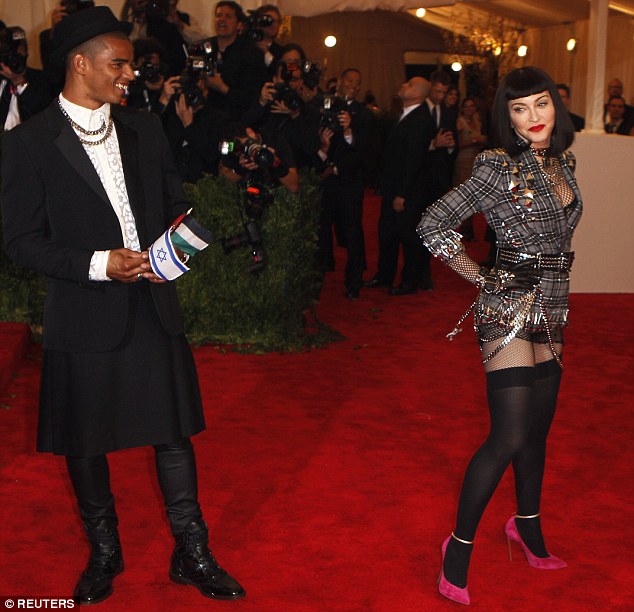 Get it, girl: Madonna’s younger boyfriend smiled as he watched his significant other soak up the spotlight