Nigeria’s Minister of State for Petroleum Service, Ibe Kachikwu has Thursday, replied a Premium Times report stating that he lied about his claims that he graduated with a First Class Degree.

In the statement published on Twitter, Kachikwu said there was no time when he misled the public on his degree and that, at the time when he graduated, his certificate was equal to a First Class Degree.

“Earlier today my attention was drawn to a publication on Premium Times with the title “FACT-CHECK: Document shows Kachikwu lied about graduating with First Class in Law”. In the next series of tweets, I would be giving my personal statement on the issue for the sake of clarity.

“In the publication the writer alleged that I, Dr Ibe Kachikwu misrepresented information about obtaining a First Class Degree from the prestigious University of Nigeria Nsukka, citing a presentation made at COZA Global Abuja. I would like to categorically state the following;

“My official CV and resume is in the public domain and has been submitted to various levels of Government and Parastatals. Also, the document clearly states that I obtained a “Second Class Honours (Upper Division) degree” from the Faculty of Law at the University of Nigeria Nsukka.

“In addition, no First Class Honours were awarded by the University of Nigeria Nsukka (UNN) in 1978. However, I was on the list for best graduands with Second Class Upper Honours for that year. At no time have I misled the Nigerian public or my colleagues in believing otherwise.

“On the presentation I made at COZA Global cited by Premium Times, the substance of the assertions was to the effect that I had a first class performance in school and was emphasizing on the need for hard work amongst youth to get them to the top of their game.

“To give credence to the statements made during that presentation, I was the best graduating student in the Nigerian Law School in the year 1979 (the first in class) with multiple prizes (winning 5 out of all 7 prizes given).

“In 1979, the Nigerian Law School had not begun a process of classifying its certificates. That begun many years later. However, best graduands have subsequently now been classified in the First Class category by the Law School.

“My results in Harvard University, which is captured in my CV correctly states that I was a Distinction graduate for the Master’s degree programme (First in Class) at Harvard University and I went on to obtain my SJD in a record time of one and a half years.

“I have worked at the highest level of the Oil and Gas industry globally for over 3 decades and indeed lectured at respectable global institutions like University of Ife, Nigerian Law School and Harvard Law School.

“Since my appointment three years ago, first as GMD of NNPC Group, then as GMD/ Honourable Minister of State (HMSPR), and now as HMSPR of Ministry of Petroleum Resources, I have championed the change agenda in the Petroleum sector and changed the narrative on performance in the sector.

“Finally, I have also taken the liberty to attach my CV that shows all my awards and accomplishments for the sake of posterity. It can be found on the link below: http://www.ibekachikwu.ng/wp-content/uploads/2018/10/Dr-Emmanuel-Ibe-Kachikwu-CV-Resume.pdf … Thank you and God bless the Federal Republic of Nigeria. 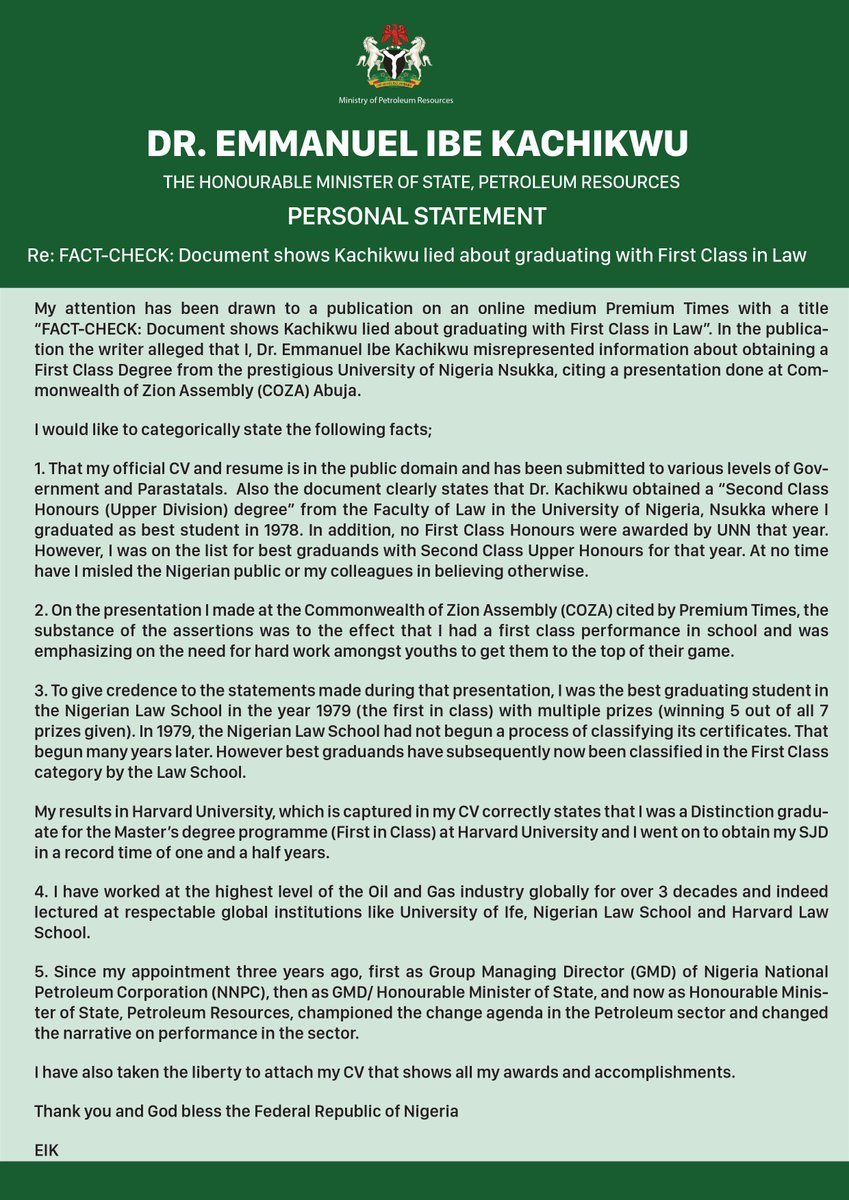