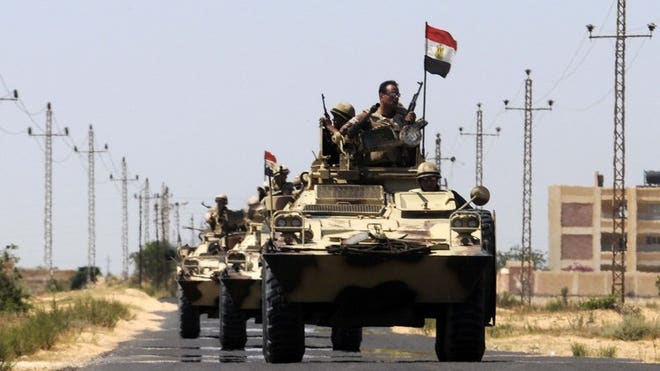 Egyptian President Mohamed Morsi was forced out of office Wednesday by the Egyptian military and opposition leaders, just a couple of hours after the Obama Administration voiced its first public doubts about Morsi’s handling of the massive street protests that spread across the country in recent days.

Egyptian Army Chief Abdel Fattah Al-Sisi took to state television to announce that the head of the country’s constitutional court would take over as president until new elections are held.

“We’ll build an Egyptian society that is strong and stable, that will not exclude anyone…and end the conflict,” Al-Sisi said. He said military leaders had urged Morsi to do more to meet protesters demands, but he did not go far enough to meet a 48 hour ultimatum the country’s military delcared on Monday.

“The speech of the president last night, before the 48 hour deadline, did not achieve the goals of the people,” the Army chief said. He said it prompted the militay to act  “based on its own national and patriotic duty.”

State Department Spokeswoman Jen Psaki said the U.S. “felt there was an absence of significant, specific steps” in Morsi’s Tuesday night speech. “Unfortunately, that was not a part of what he talked about in his speech…..There’s more that he needs to do,” she added during a daily briefing for reporters.

The comments expressed a greater degree of U.S. dissatisfaction with Morsi than previously acknowledged by U.S. officials. However, Psaki insisted that the criticism did not reflect a U.S. decision to back the opposition or the military.

“We haven’t taken sides and don’t plan to take sides,” Psaki said. She acknowledged that she had no criticism to offer of the Egyptian military, despite a warning from military leaders that they would step in if Morsi’s government and protesters did not come to an accomodation.

Psaki declined to outline specific steps the U.S. would like Morsi to take, beyond avoiding violence. However, she disputed claims by many protesters that U.S. Ambassador to Egypt Anne Patterson had sided with the government over the opposition.

In a speech two weeks ago, Patterson said she and the U.S. were “deeply skeptical” that protests would bring about positive change in Egypt. But Psaki said the full text of the ambassador’s remarks showed she was not expressing a preference for the government. “We continue to support the right of all people to peaceably assemble and express themselves,” Psaki said.