Congratulations My Sweet Kylie! What a magical ride it's been! I'll miss you bumping along with me. Never in a million years did I think we would do this together but it's been that much more special because of it. God is so great!! He had His plan all along! I love you little mama 💕 love big mama

Following months of speculations, we can now confirm that the Kardashian sibling was truly pregnant and has now been delivered of a baby girl.

Kylie Jenner made the big reveal in a social media post that partly reads, “I’m sorry for keeping you in the dark through all the assumptions. I understand you’re used to me bringing you along on all my journeys. My pregnancy was one I chose not to do in front of the world.”

This is the 20-year-old’s first child and baby father, Travis Scott is said to be ecstatic about the new born. The rapper tweeted:

Kylie Jenner also shared an 11-minute video titled, ‘To our daughter’ where she details her pregnancy journey with footages, an interview with her best friend, Jordyn Woods, visiting the doctor, seeing her Sonogram, her baby shower and a first look at Kim Kardashian’s new baby girl, Chicago West.

Months after the Twitter exchange between rapper, Ycee and Sony Music Africa boss, Michael Ugwu that let us in on the disagreement between both parties, Tinny Entertainment has now announced end of the deal that bound them.

Ycee signed a distribution deal with Sony Music Africa in October 2016 but there were indications that the relationship had gone sour when the ‘Juice’ singer took to Twitter to accuse the label of ”milking and raping artistes”. In a statement released by Tinny Entertainment over the weekend, the label revealed that they have “terminated the contract with Sony”.

Tinny Entertainment signed a license and distribution deal with Sony Africa for the distribution of some of YCEE’s music globally, in the hope that SONY AFRICA would take their music to the next level.

“We would like to state officially that we terminated our contract with SONY through our lawyers, Olaniwun Ajayi LP, by a letter dated 5 December 2017.

Henceforth, we are the sole owners of the copyright in any and all of our music and can exploit our music on any and every platform.

We have realized that it is best to undertake the distribution of our records by ourselves, as a Record Label and that Made in Nigeria across board, is the only way to be above board.”

As a Label, we are pushing out great music this year starting with “Say Bye Bye,” “I Wish” and our YCEE and Bella Collabo EP, “Late Night Vibrations.”

We thank you for the love! 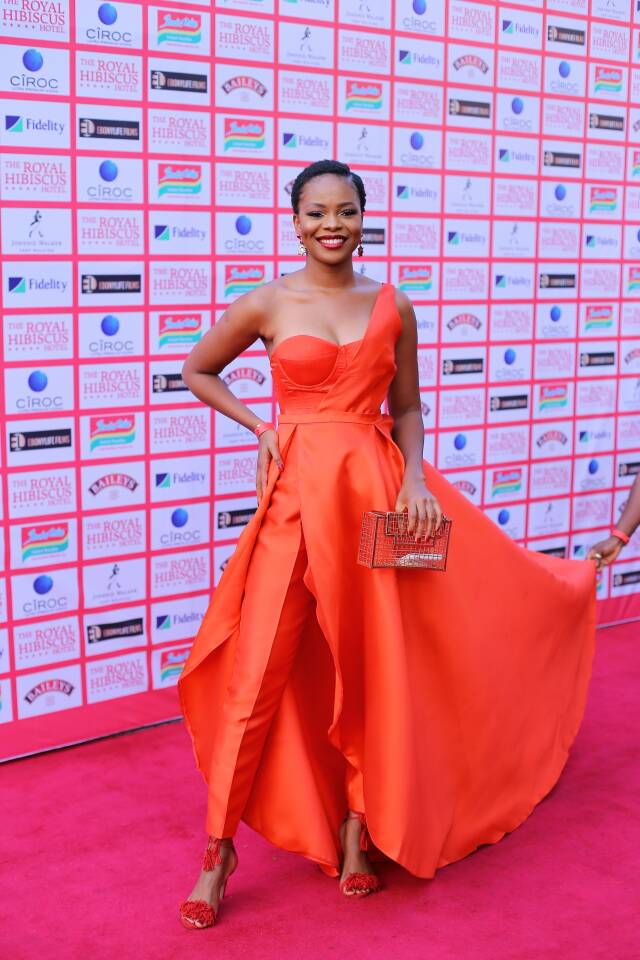 The grand premiere for EbonyLife Films’ latest production, The Royal Hibiscus Hotel held at The Civic Centre last night with a starstudded attendance.

The romantic drama which features media personality, Zainab Balogun as lead actress and Kenneth Okolie as lead actor was first premiered at the Toronto International Film Festival (TIFF) in September 2017.

The premiere which promised love, food and music was attended by top Nollywood stars and media and music personalities.

Executive producer, Mo Abudu earlier penned a note detailing the difficulties experienced in picking a premiere date and thanking everyone who contributed to making the whole journey a success.

Today Lord, I continue to give you all the glory, all the praise and honour. I thank you dear Lord.  Because I know it's only you that could have made today possible. I thank you for your love, I thank you for the strength, purpose, vision, ability, resources and favour to premiere the Royal Hibiscus Hotel today. Literally a month ago, we had the premiere of The Wedding Party 2 and just a little over a month down the line, here we are premiering another movie. I admit that I found this task rather daunting and even wanted to move the launch till Easter, but you were not having it Lord, you said go out there Mo and do this now. I had no choice than to do just that. I tried to take a holiday after Christmas, but found myself working though my holiday, trying to make sure we could meet this deadline and premiere this movie at this time, with the cinema release just a few days away. It's been tough, but here we are. I want to say a big thank you to the entire team, that have worked so hard to make today happen from the the beginning of this process from the scripting, to the casting, the principal photography, to the post production, to the music score, the PR, the event planning, our film distributors and our sponsors, whom without you all today would not be possible. I thank you all and not forgetting my own core team… My Mum, my children, my sisters, my friends, my  P.As, my driver and the entire EbonyLife TV Family… and of course to all my followers  and supporters out there that support me day in, day out. From me to you all, I say a special prayer, that God will meet you at your point of need, he will never leave you, favour will always be yours. Please Nigeria, support #RHHMovie by going to watch it at a cinema near you from the 9th Feb. It's a film made with LOVE about LOVE for this season of LOVE. God bless you and keep you all as you do so🙏🏽🤲👏. My darling @tybello thank you for this beautiful picture. It's the first time I am releasing it.💕❤💝. This is probably the longest post I have ever done. It truly comes from my heart…and this has been a rather tough week for me, but I know God is in control!

The Royal Hibiscus Hotel will hit Nigerian cinemas on 9 February.

See photos from the premiere: