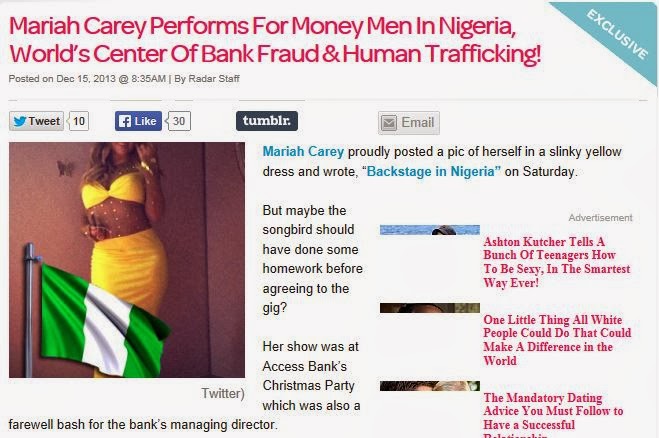 Nigerians have again come under fire from the international end as RadarOnline, a website, has described the country as the ‘World’s center of bank fraud & human trafficking’.

The website posted this as part of an article criticizing American songstress, Mariah Carey for performing in the country which it compares to Libya and Turkmenistan.

Read the RadarOnline article below:

Mariah Carey proudly posted a pic of herself in a slinky yellow dress and wrote, “Backstage in Nigeria” on Saturday.

But maybe the songbird should have done some homework before agreeing to the gig?Her show was at Access Bank’s Christmas Party which was also a farewell bash for the bank’s managing director.

And while Access Bank is a reputable financial institution, should Carey have known a few basics about the African nation before taking the paycheck?

Ironically — given that she was performing for bankers — it seems Carey wasn’t aware Nigeria is well-known as the center of the world’s email financial crimes! Nigeria is even part of the name — as in “Nigerian 411 Scams.”

Nigeria is also, according to the United Nations, the hub of human trafficking as “a source, destination and transit country.

AND, just for good measure, there are mass killings going on in two Nigerian states right now, and according to Human Rights Watch, the violence is being ignored by federal authorities.

“Systemic corruption in the Nigeria Police Force” is the problem, a HRW spokesperson told CNN.

Carey isn’t the first performer who has taken a paycheck for appearing in countries known for terror, death and fraud. In 2011, Beyoncé sang for Moammar Gadhafi’s sons and Jennifer Lopez performed in Turkmenistan.