The royal bump is here! Kate Middleton is finally showing off her new figure (LOOK)

The Duchess of Cambridge welcomed in the first signs of spring today in a mint green coat.

Kate was at Windsor Castle attending the National Review of the Queen’s Scouts for the first time in place of the Queen, who is celebrating her 87th birthday privately.

A volunteer in the Scout Association, Kate, 31, who is expecting her first baby in July, looked obviously pregnant for the first time in an extremely short pastel Mulberry coat, fawn pill box hat and her favourite nude LK Bennett heels 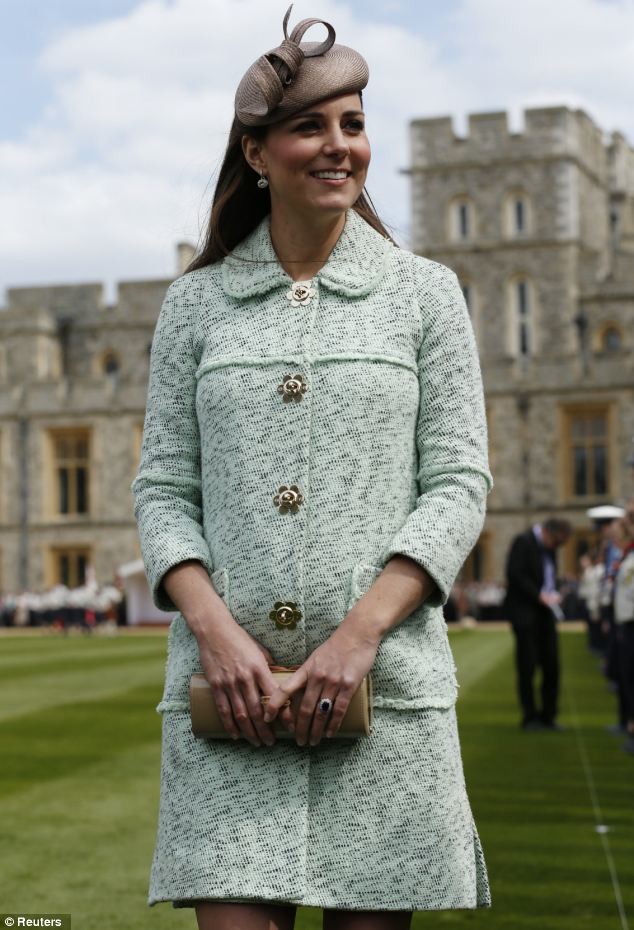 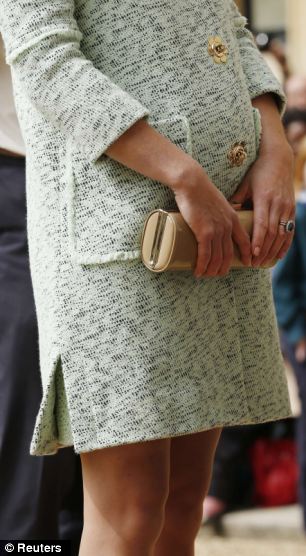 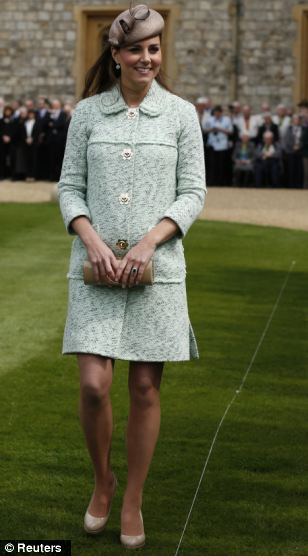 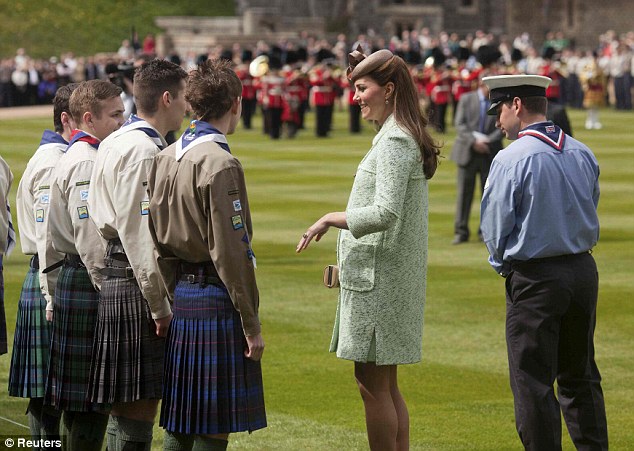 Chatting: The Duchess of Cambridge, showing visible signs of pregnancy, meets scouts during the National Review of Queen’s Scouts at Windsor Castle in Berkshire 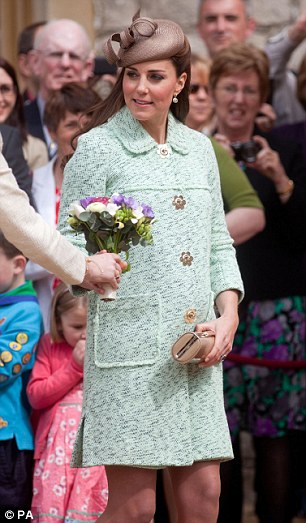 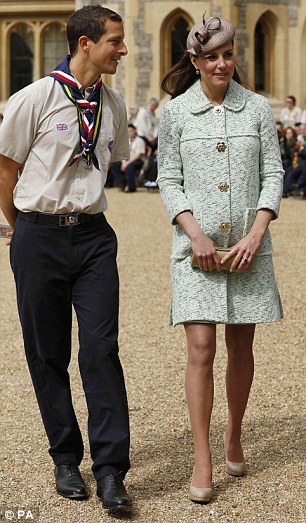 Happy: The Duchess of Cambridge is given flowers (left) and walks with Chief Scout Bear Grylls (right)

Kate has worn her Whiteley Cappuccino hat on several previous occasions, including the Epsom Derby.

The event is a day of celebration, bringing together 400 Queen’s Scouts and their invited guests to celebrate the achievements of young people and young adults who have achieved the prestigious award.

It is gained by carrying out regular community service for a year, learning new skills, completing a four day expedition in unknown terrain; taking part in a residential project and then sharing what has been learned with their peers.

During the event, The Duchess of Cambridge spent time talking with some of the 400-plus Queen’s Scouts from around the UK and the Commonwealth.

The Duchess also met gallantry award holders, who have been nominated for their bravery and heroism and meeting adversity in their everyday lives. 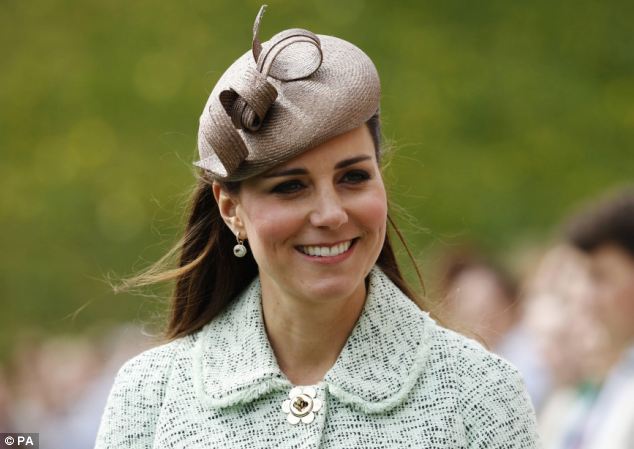 The Duchess also met gallantry award holders, who have been nominated for their bravery and heroism 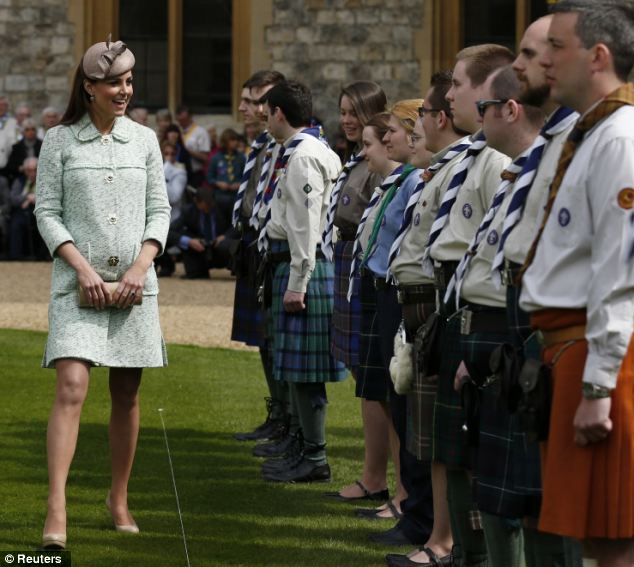 The Duchess of Cambridge look was finished off with a fawn pill box hat, previously wore at the Epsom Derby 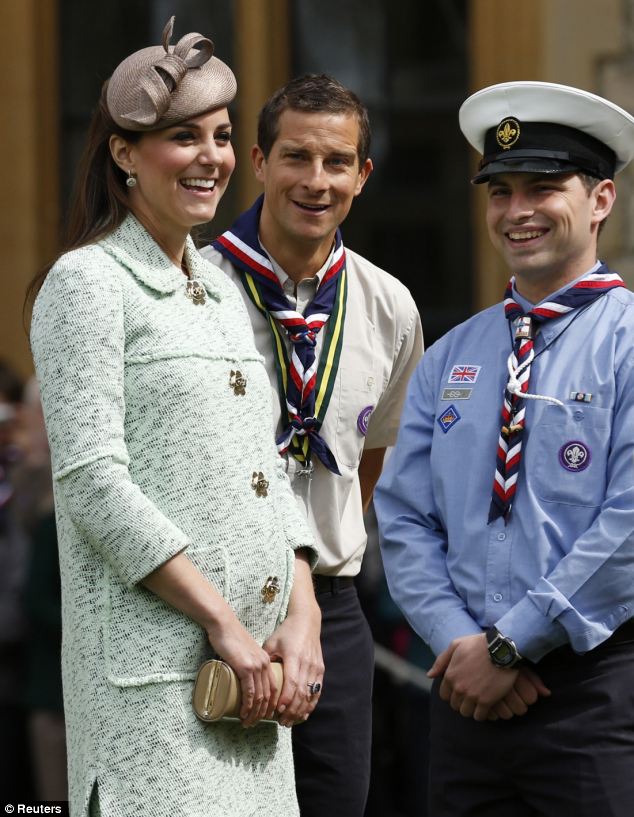 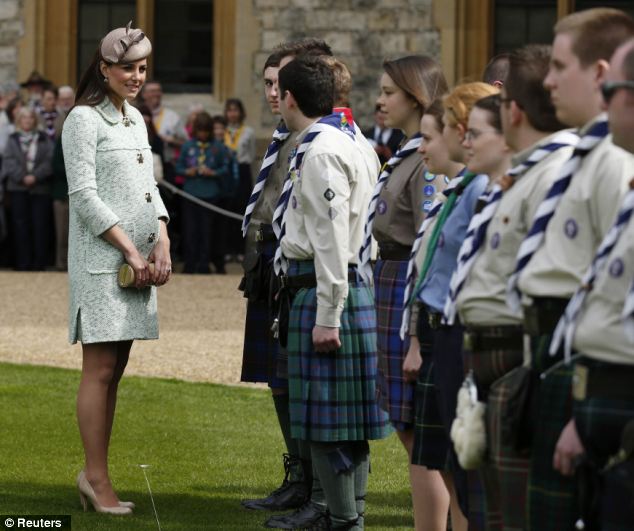 The tradition of the annual celebration event within Windsor Castle dates back eighty years.

Since its inception, tens of thousands of young men and women have been honoured with a King’s or Queen’s Scout Award for their own outstanding personal achievements.

Today, The Scout Association hailed the Duchess, who volunteers occasionally with a Cub Scout group close to her home in North Wales, for a sharp increase in the number of adult volunteers.

A spokesman for the Scouts said the Duchess had done around half a dozen volunteering sessions with her local cubs this year.

‘She loves it. I can’t see her giving it up,’ said Simon Carter, assistant director of the Scout Association. 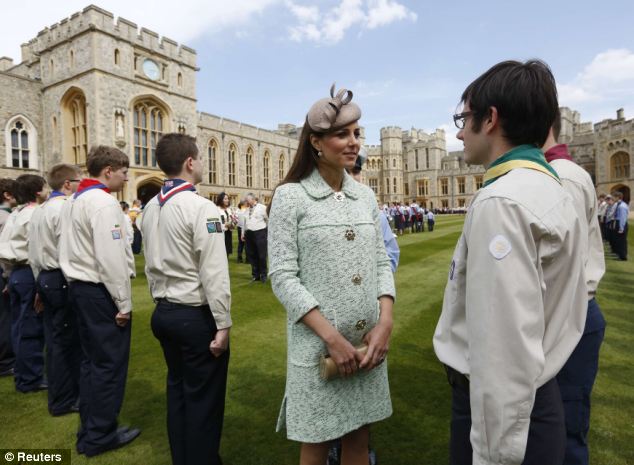 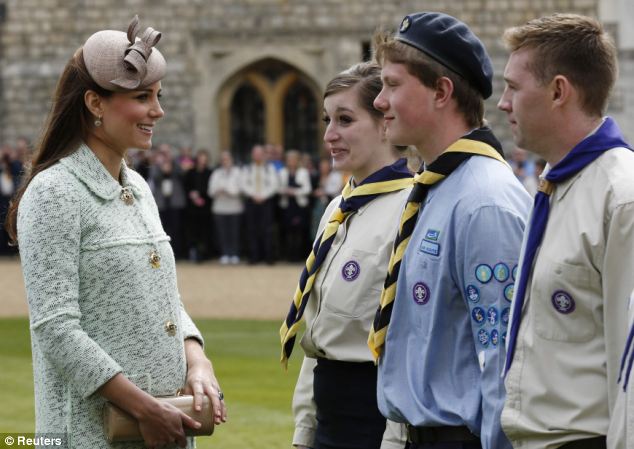 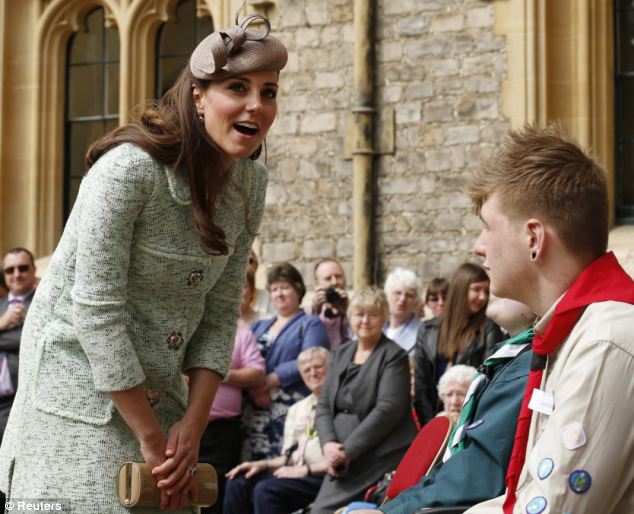 However, despite attracting more adults, the Movement still has 37,867 young people on waiting lists who are unable join up because even more adult volunteers are needed.

Bear Grylls, Chief Scout, said: ‘It’s great that so many adults are joining the Scouts, and I am sure the increase has had much to do with the Duchess of Cambridge becoming a Scout volunteer last year.

‘The Duchess is an incredible role model and she helps us show that Scouting’s not just for boys.

‘She’s also such a generous volunteer and everyone is so excited to have her in the Scouting family. Many people have followed her lead and are getting involved and enjoying the adventure.’ 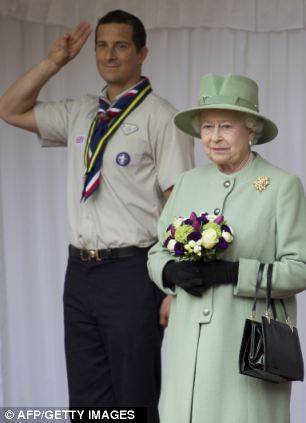 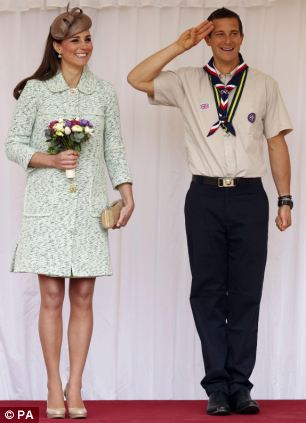 It is the first time Kate has stepped in for the Queen, pictured with Bear Grylls during last year’s event 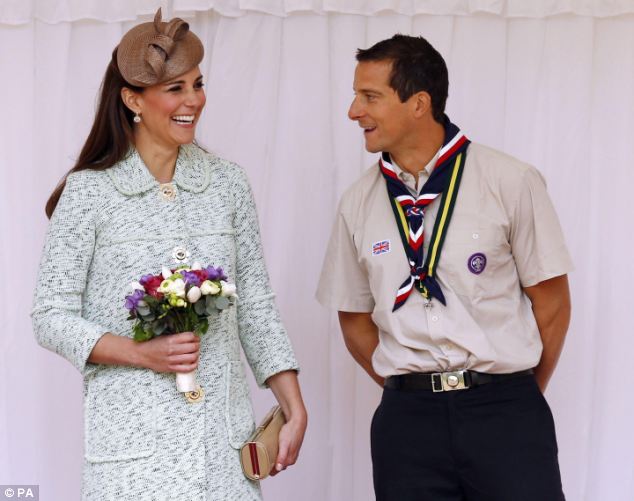 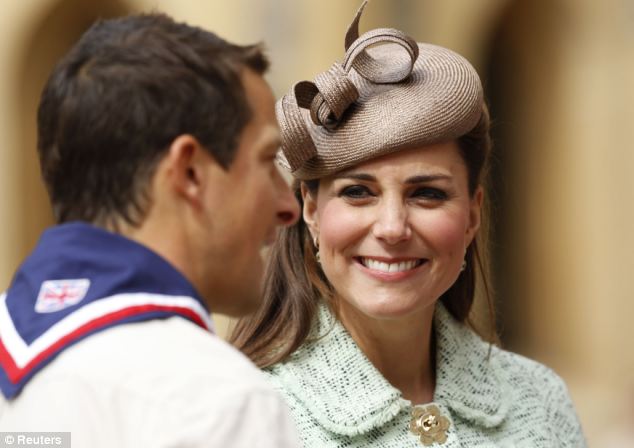 He added: ‘All the young people at Windsor Castle ceremony have given so much time and energy to achieve their Queen’s Scout Awards, and I admire their spirit so much.

‘They are huge inspirations to all the other Scouts across in the UK and I am so pleased that both the Duchess of Cambridge and Scouting have honoured them. Reaching Queen’s Scout is a remarkable achievement and along the way they will have all had the adventure of a lifetime.’

As one of the UK’s most high profile figures, it’s hoped the Duchess’ involvement will inspire other adults to get involved in Scouting.

With waiting lists at an all-time high of almost 38,000, there is an urgent need for more volunteers, in order to meet the growing demand. 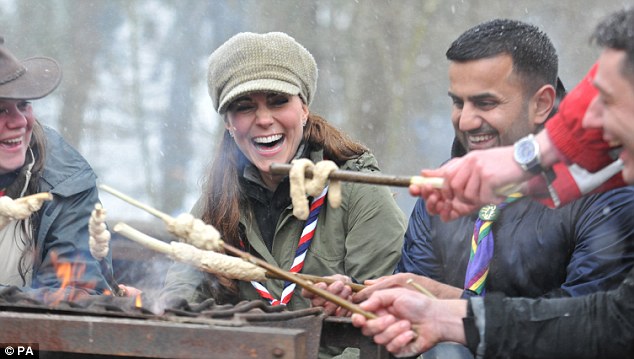 The Duchess, pictured during a visit to the Great Tower Scout Camp last month, has volunteered with her local North Wales cubs about six times this year 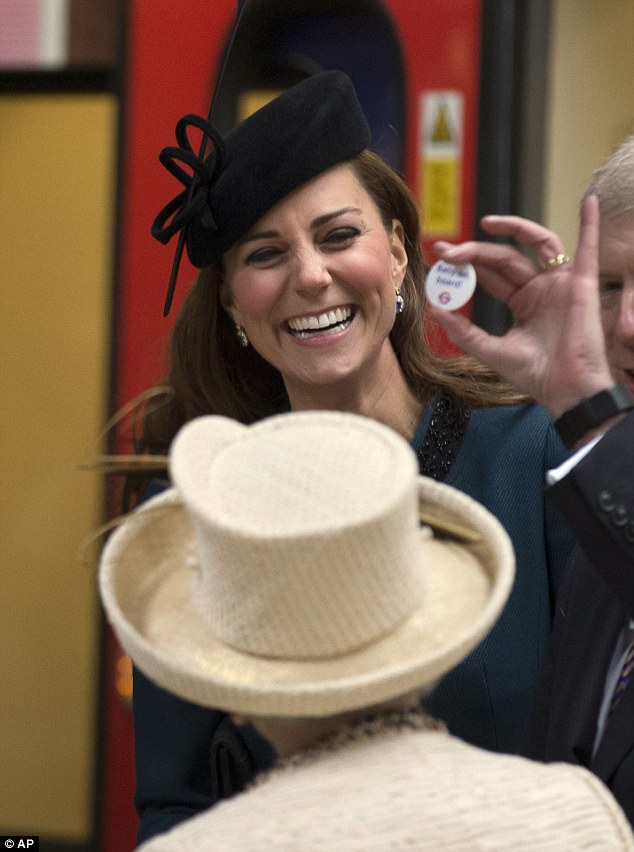 Sazeda Patel, a volunteer from Blackburn, said: ‘I didn’t think I’d have the time to volunteer, but the Scouts make it really easy to volunteer around my other commitments – and they let me give as much or as little time as I’m able.

‘I did my training with the Duchess in Cumbria last month and had a great day with her. If someone as busy as the Duchess can find time to volunteer, anyone can! I couldn’t recommend volunteering more highly; I just wish I’d got involved sooner.’

All this underlines the fact that Scouting is the largest co-educational youth Movement in the UK. On the back of eight consecutive years of growth, total membership has increased over 20% since 2005, to 536,787 this year.

The Queen attended the event last year and in 2007.